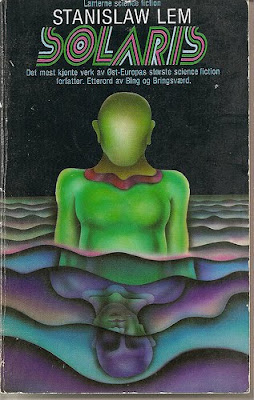 Avatar is cleaning up at the box office and engendering controversy among political and religious pressure groups. But it's not James Cameron's first foray into the memes of alien identity and interplanetary struggle. In the long run it may not even be the most revealing.
As we'll see in this installment, Cameron's involvement with the remake of the legendary Russian sci-fi film Solaris is rife with strange connections, both real and symbolic. And those connections might be part of a larger story unfolding before our eyes...
After knocking about Hollywood for a while, George Clooney hit the big time in the original ER, created by the late Michael Crichton, who himself is a pretty good candidate for being a product of some alien super-human experimentation program, given his 6'9" height, 560 IQ (give or take), Harvard Medical degree as well as his ten million bestselling books, scientific papers, Hollywood blockbusters, computer games, awards, and on and on and on.
Bonus factoids: Crichton was not only a global warming skeptic, but a believer in psychic potential.
In 1993, Clooney starred in Without Warning: Terror in the Towers, a quickie TV movie dealing with the failed WTC bombing of that year. He then played way against type in From Dusk Until Dawn and Batman and Robin, Schumacher's Ice Capades take on Batman that nearly destroyed the franchise -and all future superhero movies- forever.
Then we started seeing Clooney play the kinds of roles we normally associate with him- military, intelligence and military intelligence. In 1997 upon leaving ER he played an Army colonel trying to unravel a nuclear conspiracy in The Peacemaker and played similar roles in Fail Safe and The Thin Red Line. In 1999's Three Kings, Clooney played a treasure-hunting Army Major looking to smuggle Kuwaiti gold out of Iraq during the first Gulf War who gets caught up fighting against Bush I's betrayal of the Kurds.
What's fascinating about this film is the premonition of the hunting for Babylon and Sumerian treasure in the second Gulf War. Then things get strange. We had the Coen Brothers' O Brother Where Art Thou? which is a musical adaptation of The Odyssey.
Then he plays a spy chief in the Spy Kids films - and becomes President in the 3D film. From there we go to another extremely strange film- Confessions of a Dangerous Mind, based on Gong Show/Dating Game creator Chuck Barris' claims that he was a hitman for the CIA (and chalked up 33 hits). Clooney played Barris' handler and Moon's Sam Rockwell played Barris.
Speaking of civil wars, Clooney cast himself as CBS honcho Fred Friendly in Good Night and Good Luck. Friendly was instrumental is taking down the Cohn-McCarthy gang, probably on behalf on elements in the CIA and/or State Department.
Then came Syriana, which we looked at in the last installment, which was obviously part of the not-so-secret war being fought between the CIA (and DIA, NSA, etc) and the neocons during the Bush years, which led to one GOP congressman after another being outed or indicted, and the neocons themselves kicked upstairs to their cushy thinktank gigs.
Bonus alien dreaming sync: Syriana was co-written by Grant Heslov, who guest-starred in 'Via Negativa', one of The X-Files' many Entheogen-themed episodes. Heslov is also a Phi Kappa Psi brother, a fraternity well represented in the military officer corps.
Then was Michael Clayton - a corporate espionage film with a civil war subplot revolving around a thinly-veiled Monsanto stand-in and thick, spicy mythic allegorical subtext, yet another spy film (Burn After Reading, again with Tilda Swinton) and this year's film Up in the Air, where he plays a man who "lives in the sky."
Oh, we're not done yet.
He played Lyn Cassidy, Special Forces member of the First Earth Batallion in The Men Who Stare at Goats. It's all played for laughs but something about the whole story has a very strange smell, especially considering there's a Heaven's Gate tie-in to the story.
Note also that Major General Stubblevine who gets roasted in the film has questioned the official version of events of 9/11 and was also involved in the Stargate remote viewing project.
Given the resumes of people like Stubblevine, I can only assume First Earth was some kind of distraction/diversion from something. Note also that Steven Lang- the villain in Avatar- plays Stubblevine in Goats. Clooney's latest role is as an assassin named Mr. Butterfly who is "shadow-dweller" (a technical weapons expert who creates and supplies the tools for high-level assassins)."
That's quite an interesting resume. 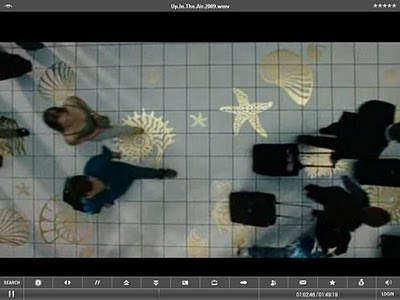 But aside from all of the intelligence operatives he's played, Clooney also has this strong semiotic link to the ocean. He plays a sea captain straight out of Gloucester (that's in the heart of Lovecraft country) in The Perfect Storm. That film is based on a book by Sebastian Junger, a journalist who has a remarkable penchant for showing up in global hotspots.
And then there's Ocean's 11, another espionage film only this time in heist movie drag. Clooney plays Danny Ocean, whose nemesis is Terry (Terra) Benedict (!). Water versus Earth. That was so successful it garnered two sequels.
While on set for Ocean's 11 Clooney saw the Solaris script, which sent Danny Ocean off to the ocean planet where he was initiated into the alien mysteries. Here's where he hooks up with Natascha McElhone, who plays Rheya the alien Earth Mother. So far as I can tell Solaris is the only proper sci-fi film that Clooney's starred in. 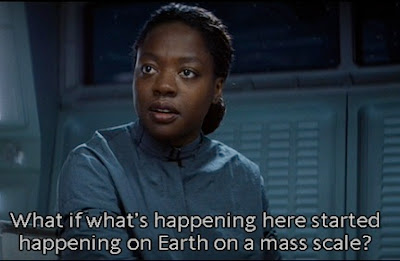 What's important to note is that although it's ostensibly a romantic sci-fi film, it can certainly be interpreted as a kind of Body Snatchers horror film. The science officer, Dr. Gordon, is terrified of the visitors and is afraid they could start appearing on earth (which is an important detail given that she's the science officer).
That's certainly what we actually see in the film itself, although Soderbergh's interpretation of what we're seeing is different. Cameron's interpretation might be a bit more germane.
THE GOD PARTICLE
Solaris is ostensibly a Soderbergh film, but fits more comfortably in the James Cameron canon, who took a very active hand in the film as producer. Solaris initially looks more like a blue sun in the film than a water planet, begging Sirius comparisons. What's more there's a good chance Solaris had a major influence somewhere along the line on Cameron's Avatar, given its themes of alien identity and a sentient biosphere. 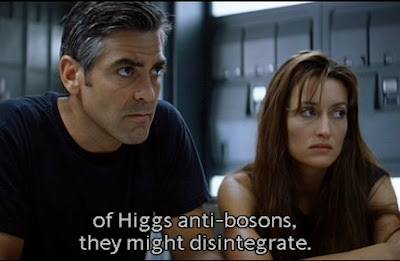 What's even more interesting about this film is that it was the first time I'd heard of the Higgs boson, the "God Particle" which keeps the visitors from disintegrating. But it appears that's the case with us as well, so what all of this might mean is extremely puzzling. The funny thing is that I thought this was just more Star Trek-type technobabble. Obviously not.
But it certainly made me pay attention when I started hearing talk about the Higgs boson and the CERN Large Hadron Collider, which came back online just a short time before the premiere of Avatar, itself ripe with themes Cameron first played with in Solaris.
So what are we looking at here? We're looking a film shepherded by James Cameron ripe with Stargate/Sirius resonators, starring George Clooney with his military/intelligence-heavy filmography and Natascha McElhone, Our Lady of Revelations and co-star of Californication, a sex comedy which was just inexplicably invaded by the Sirens/Nommo/Sirians, at least symbolically. A
nd as reader Astronut notes, the whole scenario of the hibernating Nommo is startingly similar to Lovecraft's fevered mythologies of sleeping, amphibious space gods, and Clooney started his long symbolic association with water/ocean memes smack dab in the middle of Lovecraft country.
Or better yet - smack dab back in James Cameron country. Remember The Abyss? That film seems to have fallen down the memory hole, but you want ocean-dwelling aliens? There they are. Bonus factoids: The Abyss was first released 8/9/89 and runs 171 minutes.
Or how about Cameron's first foray in the wonderful world of IMAX, Aliens of the Deep? It seems the idea of aliens and the oceans is kind of a thru-line with Mr. Cameron. I was actually surprised to see so little of it in Avatar.
Cameron's rumored to be looking at a film on the bombing of Hiroshima for his next project. Which just tickled me pink, considering we just saw a story on aliens and atom bombs sneak into the mainstream media, appropos of nothing.
But back to Michael Crichton. He wrote a novel called Sphere, in which a telekinetic alien lifeform is first discovered. Where? In the ocean. It all ties together so neatly.
Well, in dream logic fashion, that is.
at January 12, 2010