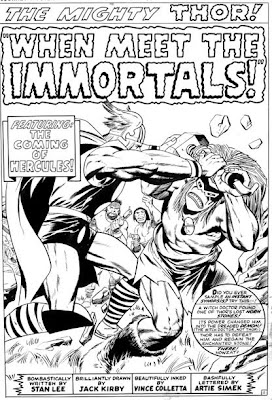 Having recently discussed Hercules and shamanism and voyages to the underworld, I was flipping through one of my Essential Thor's, where I can upon this splash-page from one of the crucial comics of my early days.
I was quite chuffed to see 'The coming of Hercules' plastered on a picture of Thor wrestling a 'witch-doctor' who found Thor's 'Norn-stone' and developed the powers of a 'demon'. I figure Kirby was plotting these stories by this time and Stan was scripting them. The connections then make perfect sense, given whatever Jack had tapped into.
Then there was the Eleusinian bit with Thor descending into the underworld to rescue Hercules, who'd unwittingly signed on as king of Hell. Interesting spin, there. 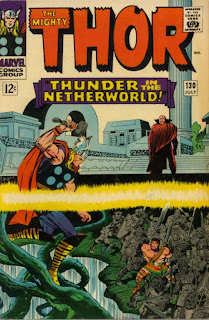 Journey to the Underworld- Cover dated July 1966
Which brings us to this story, that still boggles my mind: Falcons’ Elam has a ‘frustrating day’

Jason Elam left it in the bullpen on Sunday. After what he said was his best practice week of the preseason and a good pre-game warm-up, the Falcons kicker had one of the worst days of his 17-year career. Seven points went missing.

Falcons? Elam? This is a joke, right? The great Egyptologist Flinders-Petrie wrote that the Falcon tribe - who brought Horus into Egypt - came from the land of Elam:

The distinctive character of the 1st dynasty, which separates it from all that went before, is the conquest and union of the whole land of Egypt. It became thus subject to the falcon-bearing tribe of Horus, which was the natural enemy of the Aunu, the Set-bearing tribe. This falcon tribe had certainly originated in Elam (modern -day Iran), as indicated by the hero and lions on the "Araq knife handle". They went down the Persian Gulf and settled in the "horn of Africa."

Iran, the Persian Gulf, the Horn of Africa? Why, this Horus tribe seems to have hit all of the hotspots circulating in the news these days, no? Finally, speaking of Horus, there's this story:

Nev. man accused of DUI for 3rd time in 17 days RENO, Nev. – A 50-year-old Reno man has been arrested on suspicion of drunken driving for the third time in less than three weeks. Reno Police Sgt. Tom Robinson said the man was stopped Monday afternoon on a U.S. Highway 395 off-ramp...

The 43-year-old told the AP in a series of interviews this week that by the time the sweat lodge ceremony began, the participants had undergone days of physically and mentally strenuous events that included fasting. In one game, guru James Arthur Ray even played God.

At one point, someone lifted up the back of the tent, shining light in the otherwise pitch-black enclosure. Ray demanded to know who was letting the light in and committing a "sacrilegious act," Bunn said.

The account marks a significant revelation in the investigation because it portrays Ray as driving participants to stay in the lodge despite signs all around him that the situation had gone horribly awry. Until now, few details had surfaced about Ray's actions inside in the sweat lodge.

Interesting timing, given that Elizabeth Clare Prophet just passed away. Prophet's apocalyptic, authoritarian, neo-Theosophist, Christo-Buddhist cult was big in the late 80s but her predicted Apocalypse never came, as is so often the case with those stubborn ol' Armageddons.
The problem was is that her followers quit their jobs and holed up in Montana with guns and such for the occasion. Speaking of the Gyre, Prophet's Church Universal and Triumphant was most likely a model for the 'Church of the Red Museum' from The X-Files. Prophet was stricken with Alzheimer's for the last decade or so.
Here's an MP3 of Prophet's 'Invocation for the judgement against and destruction of rock music'. Enjoy!
UPDATE: Can some explain to me what this woman is saying? Does she think the sweatlodge deaths were a blessing?
UPDATE: From luxury to heartache:

And of course Valhalla ties back to the Thorniverse, doesn't it?
at October 21, 2009