The Secret Sun Best of the Zeros: The Books

The 90s were the decade of my great romance with books. There were so many life-changing titles that came out I can't begin to name them all. Certainly a lot of the work of Graham Hancock is up there, but a very large iceberg lies beneath it. I'd venture to say that most of my favorite non-fiction books were published during that decade.
The Zeros was when I went from reading to writing. I had three books published; Clash City Showdown, Our Gods Wear Spandex and The Complete X-Files, one on the way and a finished manuscript awaiting major revisions. In between I spent endless hours struggling with a unpublished graphic novel that finally defeated me. But I did find time to read (I read dozens and dozens of books cover to cover when working on my upcoming book) and here are my top 5 books of the decade, in no particular order. 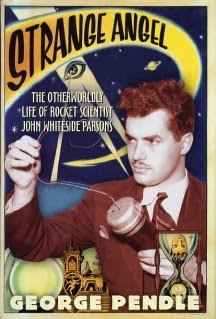 Strange Angel: The Otherworldly Life of Rocket Scientist John Whiteside Parsons by George Pendle - This was a revelation. So much ridiculous nonsense has been written about Parsons by both friends and foes that the man's history was in danger of being mythologized beyond recognition. Pendle used a fearsome arsenal of journalistic skills to dig up the truth behind the legend and reveal a fragile, erratic and troubled genius whose flirtations with the dark side of the occult ruined his career, tarnished his reputation and may well have cost him his life.
Pendle nicely catalogs Parsons' scientific and occult obsessions without bogging the reader down in minutiae. Ultimately, Parsons was like many geniuses- it all came too easy for him and he spent his life trying to transcend his gifts in search of some grand apotheosis. Eerily similar to any number of more recent true Hollywood stories. I'm sure if he'd been born 20 years later he'd have traded rockets for a camera and had his own chapter in Easy Riders, Raging Bulls. 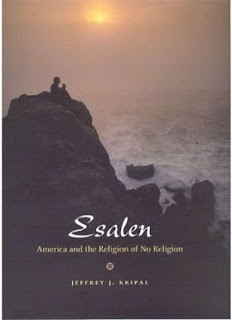 Esalen by Jeff Kripal - Another fascinating exploration of a topic too shrouded in mythology. This is an exhaustive, warts-and-all, insider's look at the legendary Big Sur institution that played host to legends like Aldous Huxley, Alan Watts and Joseph Campbell. Almost like a who's who of my adolescent and early adult heroes. A somewhat elegiac look at a more innocent and hopeful time in American history, before spirituality became a commodity and religion became the hammer-fist of the corporate state. 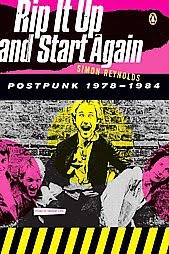 Rip It Up and Start Again: Postpunk 1978-1984 by Simon Reynolds - As a preadolescent prog fan I recognized Postpunk for what it was- the second coming of prog and art rock, decked out in decadent, postmodern drag. Reynolds' book is by no means perfect- he indulges his all-too-typical rockcrit tastes at the expense of postpunk bands that were actually successful, important and influential, but the book does provide a worthy and well-rendered historical framework for a period in music history that still resonates to this day.
The chapter on Throbbing Gristle is worth the price of the book alone (I also love how Reynolds describes Geordie Walker's guitar playing as "sulphuric, inhuman, practically inhumane."). 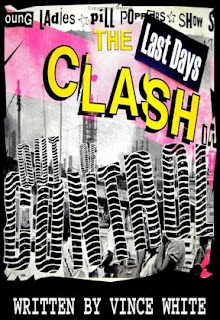 Out of Control: The Last Days of the Clash by Vince White- The last incarnation of the Clash was one of the most star-crossed bands in the history of Rock- an inglorious self-implosion that squandered the potential of a major reinvention for a band that had compromised themselves into a corner. And replacement guitarist White explains why in ruthless detail, cataloging the backstabbing, the doubletalk, the cowardice, the stultifying hypocrisy.
White's gift for voice is uncanny, and his writing is a throwback to gonzoids like Hunter S Thompson and Lester Bangs. White's picture of Joe Strummer talking revolution while sipping endless glasses of champagne brought to his well-appointed table by an Asian houseboy is devastating to the working-class hero myth still being peddled by credulous journalists.
I really hope White does some more writing. He could knock the literary world on its ass the same way the Clash did the musical one in 1977.

Turn Off Your Mind: The Mystic Sixties and the Dark Side of the Age of Aquarius by Gary Lachman - Another great book written by a punk rock also-ran. Former Blondie bassist Lachman hung up his bass for occult scholarship and unleashed a book exhaustively cataloging the occult revival of the 1960s. I do think his conclusions are often way off-base (the evolution from Alan Watts to Marilyn Manson seems a little tenuous) but the research itself is invaluable. A must-read for anyone interested in the influence of esoterica on pop culture.
Now to the comics. Certainly the big story this decade was the mainstreaming of comics and graphic novels. The medium came roaring back in the Zeros after being left for dead in the 90s, certainly as a result of 9/11 and the ever-expanding wars. Certainly a fascinating story in and of itself. I think some guy wrote a book about it. 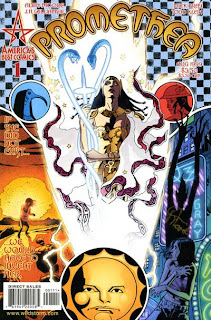 Promethea: Book One and Two by Alan Moore and JH Williams- Alan Moore came back to superhero comics in a big way at the turn of the decade with the America's Best Comics line for Wildstorm/Image.
Unfortunately, Wildstorm sold out to DC early in the line's run and you could feel some of the air go out of the tires. Tom Strong was Moore's pulpy take on Superman, Top 10 was his post-Watchmen team book parody and League of Extraordinary Gentlemen was his Victorian-era take on the Justice League.
My favorite was Promethea, his supernaturalist spin on Wonder Woman. Promethea was a child of the gods, an Egyptian girl rendered immortal by Hermes-Thoth when her father is murdered during the pagan genocides of the early Christian era. She exists in the Immateria- the realm of Imagination- until called into existence when someone believes in her strongly enough.
For me, the glory days of Promethea were the first eleven issues where Moore's obsession with magical lore was carefully woven throughout the storylines. With #12 the book abruptly switched gears and became an illustrated lecture on occultism. The first issue of the new Promethea explored the Tarot in an entertaining way, but for my money the book became very heavy sledding thereafter.
A lot of other readers agreed with me and Moore brought the book back to a narrative format shortly before its cancellation in 2005. 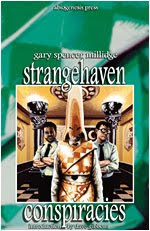 Strangehaven Book Three: Conspiracies by Gary Spencer Millidge- The basic concept on this infrequently published indie title is Twin Peaks in the English countryside. Millidge uses (or used, the book seems to be on hiatus) extensive photo-reference, but not in the slick, distancing way some mainstream comics artists have. The point is to create maximum believability.
Conspiracies collects the storyline where the protagonist Alex Hunter encounters a dangerous Druidic secret society called the Knights of the Golden Light, comprised of the village's leaders- including its police force (hmm, sounds like New Jersey). Alex is courted by the Knights and consults with an occult scholar who informs him that the village of Strangehaven lies at the center of a powerful vortex of leylines. Gripping stuff. Buy it here.
Lucifer: Children and Monsters by Mike Carey and Peter Gross- I'm more interested in my Sandman Companion than the series itself, so this spinoff was a surprise for me. Especially since the titular character is such a dick. But Carey created this surprisingly immersive web of characters and stories around him that the series had my attention for the first several issues of its run. 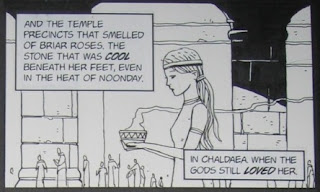 The first three or four trades are all worth having but I have to cite Children and Monsters for the title story, which is one of the most mind-blowing comic book stories I've ever read in my life. Illustrated by Dean Ormston (one of my favorite cartoonists of the past few years) it tells the story of a young Chaldean priestess cursed by the gods to concieve and miscarry every day for eternity when she breaks her vows of chastity. It's a story that crawls inside your head and stays there long after you've finished it. The kind of magic only comics are capable of, and the kind of magic we see far too little of anymore. 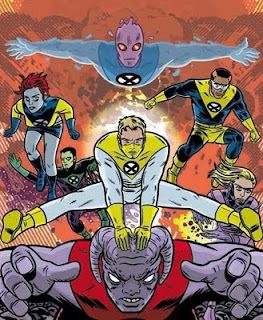 X-Force by Peter Milligan and Mike Allred - Marvel came roaring back from bankruptcy in the early Zeros and created a sense of excitement and community that strongly reminded this old fanboy of the Marvel Age of the 60s. There was a real try-anything spirit and putting Vertigo nutcase Peter Milligan and indie maestro Mike Allred on an X-book was one of the fruits of that philosophy.
X-Force tied nicely into the meta vibe of the "Bill and Joe Show" (the editorial regime of Bill Jemas and Joe Quesada) and deconstructed the whole X-millieu in the bargain. The book changed its name to X-Statix, but some of the fizz was gone for me by then, and it seemed more Madman than Milligan. Still need to read Allred's Golden Plates books.

The Eternals by Neil Gaiman and John Romita, Jr.- Of course. The Eternals is one of the touchstones of my youth, and though they stuck around after Jack left Marvel, they never had quite the same import for me (they were certainly popular in their guest appearances in books like Thor). Chuck Austen laid the groundwork for this big ticket comeback with his under-rated miniseries The Eternal but could never compete with Gaiman's starpower.
Funnily enough, I bought the first few issues and was gravely disappointed and decided to wait for the trade. It was a wise decision. I suppose Gaiman's been working as a novelist for so long he paces his stories to build momentum as they unfold. A lot more fantasy-oriented than Jack would have liked, but synched up eerily with Heroes, with which it shared a number of plot points. Also touched on ideas I'll be ruminating on in the future.
Many honorable mentions: The Eternal, Dark Ivory, the Tony Moore-era Walking Dead, Morrison's Marvel Boy and All-Star Superman, Carey and Bachalo's run on X-Men, Rich Corben's renaissance on Hellboy and other titles, Wolverine: Enemy of the State, the mind-boggling remastering of Lee and Kirby's Tales of Asgard, Finder, and Army@Love: Hot Zone Club and everything by Adrian Tomine. Others I'm sure I'll regret for not remembering.
at January 03, 2010