Cargo Cults of the Gods 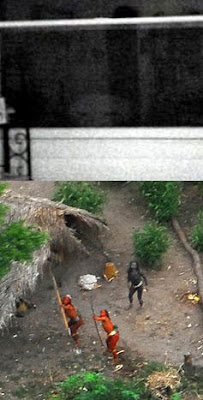 OK, so the same day we're promised a glimpse at a real-live Grey we get pictures of a very exotic looking undiscovered tribe in the Amazon. An expert tells us this tribe is trying to remain hidden, and I can't look at those pictures without thinking of the Cargo Cults that got Van Daniken started with Chariots of the Gods. 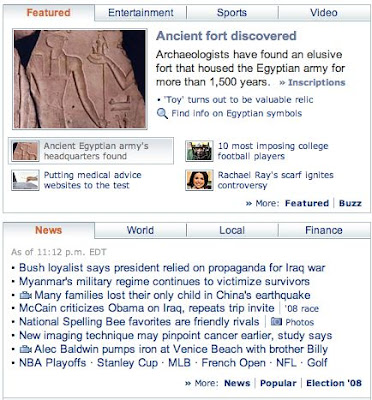 Is this some occult holiday no one bothered to tell me about? First Yahoo hits us with the Janus/Ouroboros cup and now we see none other than the big guy himself on the front page.
Read more »
at May 28, 2008

Email ThisBlogThis!Share to TwitterShare to FacebookShare to Pinterest
Labels: Egypt, The Mysteries, Yahooccultism 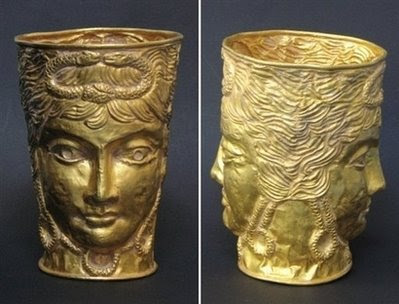 Handout images showing the front and side views of a gold cup decorated with the heads of two women. An ancient gold cup mysteriously acquired by an English scrap metal dealer is expected to fetch close to a million dollars at auction after languishing for years in a shoe box under its current owner's bed.

Email ThisBlogThis!Share to TwitterShare to FacebookShare to Pinterest
Labels: The Mysteries, Yahooccultism

WTF? On what planet do jackals look like that? And why do junk culture types always cast Anubis as a villain, anyway? If you're going to use this symbolism, do your damn homework. The rest of it? You'd have to ask Fredric Wertham, not me.
Oh, crap; he's dead. Never mind.
Read more »
at May 23, 2008

Now, More than Ever 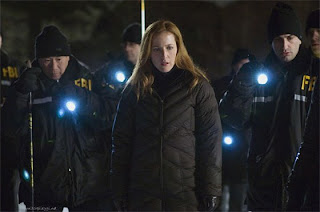 There has never been - or will there ever be - anything as great as The X-Files.

Go watch the latest trailer. The whole thing is blowing my mind, for reasons I can never say.

The Atavistic Soul Rises Once More 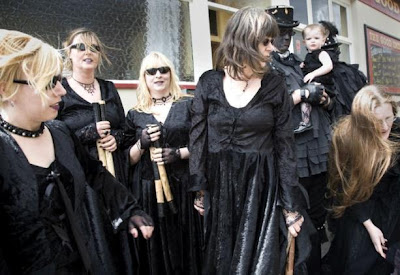 OG Synchromystic Ben Fairhall blogged recently about Goths and Pagans reviving the Medieval ritual of the Morris dance. Of course The Independent is going to mock this phenomenon, because the smartass colleges its writers go to teach nothing about how culture really works.

Grosse Pointe Blank climaxes with a gun battle between John Cusack's character Martin Blank and Dan Ackroyd's character Grocer. Even if you've seen the film, you may not have noticed this little snippet of dialogue, paraphrased from Revelation 13:
Read more »
at May 19, 2008 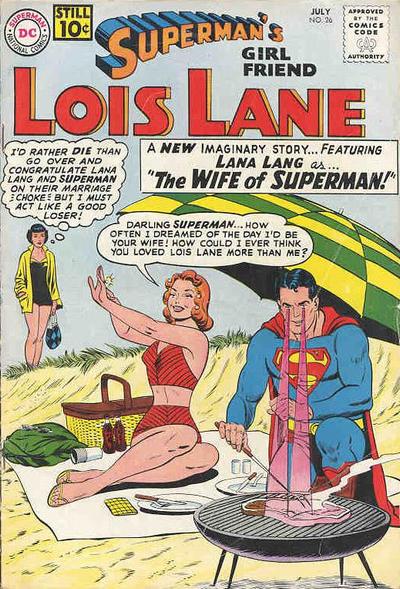 In the 1950s, the gruesome excesses of horror and crime comics provoked a public outcry, resulting in the suffocating strictures of the Comics Code Authority. In point of fact, most publishers were already pumping out comics that were completely inoffensive, but the threat of censorship seemed to have a bizarre effect on comic creators.
Read more »
at May 19, 2008 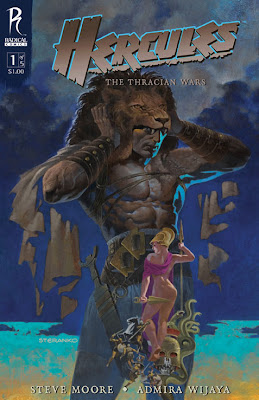 The old master has not lost his touch. I'll be picking this book up, that's for damn sure. I'm framing that puppy. Ask your local retailer about this title.
at May 17, 2008

Astronaut Theology: Variations on a Beam

Previously we looked at the use of the Heavenly Beam of Insemination in science fiction poster art and in architecture as well. I wanted to cover some variations on this motif in other films, which may not always put across the same message exactly, but certainly relate to the concept of planetary insemination or human evolution.
Read more »
at May 16, 2008

Golden Boy: Just Saying, is All 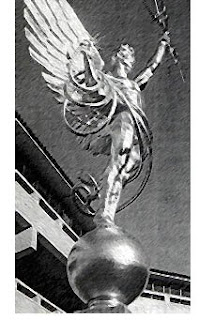 Here's a picture of Golden Boy when he stood vigil outside of AT&T's former world headquarters in Basking Ridge, NJ. The building is now owned by (former Baby Bell) Verizon, whose name is one of those corporate neologisms. In this case it seems to be a contraction of "true (veritas) horizon." Could horizon's true occult meaning be "Horus-Zone?"

It's an interesting question, given that Verizon's logo could be interpreted as containing a hidden 17. If you really wanted to get carried away, you might interpret it as Veritas, 17 (Horus) and On, the biblical name for Heliopolis (cult center of the Followers of Horus).

I may have mentioned this before, I strongly believe that the Mithras known to the Romans was no relation to Zoroastrian Mitra, but in actuality a culturally-appropriate adaptation of Horus himself. This is something I've researched in depth for my upcoming book on esoteric symbolism in science fiction film.

Suffice it to say that conservative Romans held a very dim view of Egypt, seeing it as corrupt and decadent. And they also thought the notion of animal heads on gods was offensive. But the Shemsu Hor obviously had a very strong interest in Rome, and it's my belief that the Mithras cult was created especially for those Romans whom they wanted to bring into the fold, namely those alpha males in business and the military. The Shemsu Hor's fingerprints are all over Mithraism, as we will look at in the future.

All of these figures - Horus, Mithras, Helios, Sol, Shamash, Ba'al, Hercules, etc etc etc - all represent the Sun as a symbol of phallic aggression, technology, hierarchy, and militarism, so any difference between them or their cults is academic, anyway.

There's Gotta Be a Way Out of This Mess

The more I read about the ancient "pagan" world and its practices and beliefs, the more I think that the difference between Christianity and "paganism" is purely a question of politics. Even a casual reading of the actual practices of the Isis cults or Mithraism would hit familiar notes with any modern Christian.
Read more »
at May 15, 2008

The choice of Jaye Davidson to portray the ancient astronaut Ra in the movie Stargate may have been derided as stunt casting at the time, but it speaks to a recurring motif in Ancient Egyptian history and iconography.
Read more »
at May 14, 2008

Here's a fascinating sculpture from the British Museum, showing us that the cross necklace long predates Christianity. Here it is identified with the sun god Shamash.

Mithras is Alive and Well and Living in New Jersey

Daria Invictus recently blogged on a subject near and dear to my heart- the enigmatic Golden Boy, who has been passed like a torch from corporation to corporation. Daria explored the various connections to a host of pagan deities, but I had a nagging suspicion there was still another figure being celebrated in this composite icon; the Corporate Elite's favorite god, Mithras. We shouldn't be surprised at Mithras' showing up in corporate iconography - his followers were deadly serious, highly disciplined soliders and merchants. And what is the modern corporation if not the ultimate apotheosis of the "Business as War" paradigm? Mithraists worshipped in secret during the First Century, why not in the Twenty-First?

Golden Boy was originally known as "The Genius of Electricity" when commissioned for Western Electric, then renamed "The Spirit of Communication" when sold to AT&T. His latest owner is the new AT&T, formerly known as Southern Bell.
He currently resides on the AT&T campus in Bedminster, Nova Caesarea. You can see him while driving on Interstate 287 South (2+8+7=17). As Daria notes, he originally sat upon a pyramidical turret on the old AT&T building in Masonic Manhattan, giving us yet another depiction of the Heavenly Insemination.

As you see in this ancient frieze of Mithras, Golden Boy is simply a modern take on the old sun god. The Snake of Time becomes an electrical cable and his staff becomes electrical bolts. The pose is almost exactly the same, only minor details differentiate the two icons. For instance, the globe Golden Boy stands on comes to us from another Mithraic icon...

...that of Aion, the enigmatic figure whom Jung identified as the Imageo Dei- image of the god within. As with so much Mithraic imagery, the meaning of the globe is unclear, but my own interpretation is that the Mithraists had intended to rule the world. It's open to debate whether they are succeeding in that ambition.

Whatever the intended message behind it, it's interesting to note that Golden Boy has been reintroduced in advertising for the new AT&T. Maybe it's simply because it's an amazing work of art with heavy-duty Syncromystic resonance. One thing's for sure- you can add this to the rapidly escalating use of Solar symbolism in corporate and church iconography.
at May 12, 2008

Sia: A Voice Spun from Gossamer

I spent years waiting for Elizabeth Fraser to drill a musical hole in the center of my forehead like she did back in the day. But Jeff Buckley's death ended the Cocteau Twins and practically speaking, ended her career.
Read more »
at May 10, 2008

On Monday, we looked at the icon of the heavenly phallic beam of light and the pubis/pyramid in relation to science fiction movie posters. We have some more of those on tap, but let's try to further decode this enigmatic icon.
Read more »
at May 07, 2008

Over the years I've come to see the imagery used for promoting the film Stargate not merely as a design element, but as a extremely serious religious icon. The film is an ancient astronaut parable, explaining high civilization as the result of extraterrestrial interference.
Read more »
at May 05, 2008 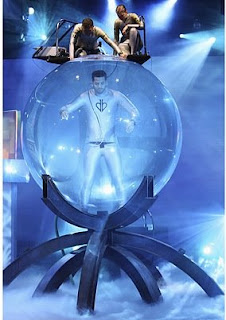 On Beltane's Eve, David Blaine reenacted the Death of Osiris in a custom-made watery sarcophagus. The cover story was that he was trying to break the breath-holding record.
However, the tell was the 17 minutes he spent underwater.

Bonus factoids: Oprah's show is filmed at Harpo Studios, located between Washington and Randolph Streets in Chicago. Harpo comes from Harpocrates, meaning "Horus the Child." Randolph means "wolf shield," and Osiris was associated with the wolf.

Canadian researcher Alan Watt is a charming old curmudgeon with interesting insights on the nature of power structures. He's essentially the Internet version of the old cat in the bar who'll spin you some wild yarns if you buy him a round or two.
Read more »
at May 01, 2008

The Smiling Sun and the Hidden 17 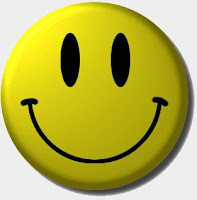 Given the enormous resonance of the Smiley Face, I thought I would share the research I've done into it, and add another interesting clue to the mix. I highly doubt any of this has anything to do with the Midwest killings per se, but it does add a semiotic charge to the issue.