Stairway to Sirius: From Oslo to Oannes 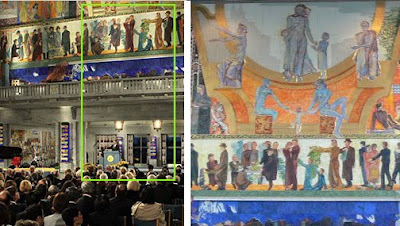 OSLO - Obama's speech at the Nobel ceremony really caught my attention, in that it wasn't a peace speech at all. It was an apology-for-war speech.
At a crippling cost to the homeland economy, the US military is expanding its reach all over the Middle East and Central Asia, now to Yemen. Oil is the obvious motivation behind all of this, but it doesn't explain the mad dash made to the Baghdad Museum during the 2003 invasion, nor does it really explain Dubai, which has no oil.
DUBAI - Even though the citystate is riddled with debt, there seems to be a worldwide effort to prop up Dubai as the de facto world capital, with a skyline straight out of Jack Kirby's most delirious fever dreams.
Nothing explains Dubai, if you follow conventional thinking. What was once a backwoods fishing village became the most incredible cityscape the world has ever seen essentially overnight. And it's smack dab in Oannes' old neighborhood, a fact I just can't seem to shake.
And then there's the issue of the blue gods walking through the golden Stargate that loomed directly over Obama's head as he gave the speech. You know, that little trifle.
Now, call me crazy but I file that little conjunction in my "Intentional Symbolism" file. What exactly it means is open to interpretation. But it leads me on occasion to flights of speculative fancy where I see Washington divided not along right and left, Republican and Democrat, but pro- and anti-alien camps. The anti-camp isn't too hard to pick out, if you were so inclined: the Neoconservatives, the Religious Right, the Pentagon, some of the Intelligence agencies.
These are the people running the show, who believe that if aliens ever showed up on our doorstop, it wouldn't be for tea and biscuits. It would probably be to negotiate the terms of surrender.
Washington 1952-a show of force?
Who would the pro-alien camp be? Hard to say. Maybe those who see the ruling classes on this planet as soul-sick, corrupt and auto-destructive, but impossible to dislodge at this stage in the game. Who know what a dismal, hopeless state things are in and believe a roll of the dice is preferable to World War III. Or it could be those who believe that contact is inevitable, is imminent and the best thing to do is to negotiate the best terms of the handover. It could be those in the diplomatic corps, in the civil services, in the sciences, the thinktanks, maybe the officer corps- people who've been looking at the UFO phenomenon post-Hiroshima and believe that our atomic tinkerings have triggered the next stage of the game.
Now, understand this is all speculation. Maybe it would make for a good sci-fi movie. The fact of the matter is I don't believe any intelligent species would even approach this madhouse without overwhelming technological force, so any pro- or anti- maneuvering would be meaningless.
But I've often thought the UFO phenomenon struck me more as reconnaissance, sort of like what the military is doing in any number of countries as I write. But I've still yet to come across a single shred of truly compelling evidence about who exactly is flying those things up there, only that they've been up there forever, not just after White Sands.
This interview with Robert Temple (author of The Sirius Mystery, among others) caught my attention, since it synched with memes we've been looking at popping up in the media lately- particularly the water and Sirius memes.
This interview caught my ear because Temple reveals that the Dogon people believe that the Nommo didn't return to Sirius, but are in orbit around Saturn, hibernating. That could be total nonsense for all I know, but it reminded me of 2010: The Year We Make Contact, a film maybe all of us should rewatch.
There's another interview with Temple worth watching. In it he talks about the grief he got from a certain intelligence agency, which makes sense if indeed there are people in power worried that Temple's theories may in fact be based in truth. Temple himself is connected up to his eyelids, but only a naif believes there aren't sects and cliques and factions galore in the power structure, constantly fighting for dominance.
Temple's tied deeply in with the China/Alliance crowd (I'm not sure if the Obama crowd is yet), which is one of the 'pro-alien' factions in my fevered reveries. Who knows about any of it? We're just shooting the breeze here. But it's interesting that once the Buffet-Brzezinski crowd put the neocons and theocons on a short leash around 2006, all of this weirdness started appearing in the memestream again, after being nearly invisible during the glory days of the Bush bunch.
at January 07, 2010