Well, well, well...it appears Dubai is down but not out. The unveiling (as it were) of the new Burj Dubai tower was heralded by yet another seen-from-space fireworks display (which again, was incomprehensible to anyone looking at it from ground level as the video shows) as well as the same climaxing-obelisk fireworks we saw in Asia on the New Year.
Comparisons to the Tower of Babel (literally "Gateway of the Gods") are inevitable, and most certainly intentional. Note also that the Burj is 2,717 feet high - 2+7+1+7=17. Or should I say 818 meters? 8+1+8=17 It reached that height on January 17, 2009. A trip to the top will put you out 17 British pounds. Unfortunately, the Burj is located on route 71, not 17.
Click the Dubai tag at the bottom if you need deep background on all of this jolly rot. Appropos of absolutely nothing, the LA Times linked the Burj story to Pyongyang's still-unfinished pyramid.
Like Dubai, Hong Kong had a big obelisk show for New Year's- in fact we saw quite a few obelisks kicking around the news. I should note that the first time I saw the exploding obelisk routine was at the millennium, with the show at the Washington Monument. 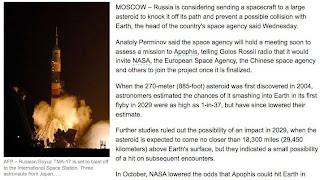 Yahoo put up a shot of the Russian TMA 17 rocket (tangentially linked to the Norway incident, btw) with that strange Apophis story, which I can't help but wonder was some kind of plant.

Like Yahoo, HuffPost can always be counted on for wacky symbolic hijinks, and this little two-for didn't disappoint. 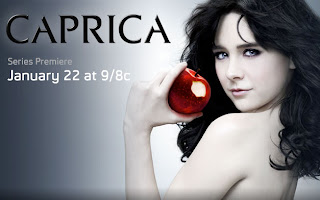 Speaking of "seen from space," the big SyFy premiere this month is Caprica, the sequel to the Battlestar Galactica series. This enigmatic image was interesting, given the AAT themes at its core (no pun intended), but having recently watched the original BSG pilot from 1978, there's yet another obelisk connection here as well. 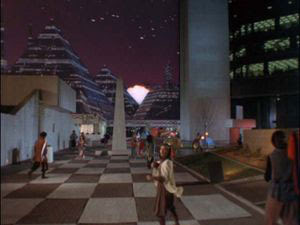 And that's this shot of Caprica during the Cylon invasion. The imagery here is highly reminiscent of the symbolic work of former NASA artist Robert McCall, who worked on 2001: A Space Odyssey. I haven't seen him credited with work on BSG, but it's certainly in his style. I know the usual story that the obelisk is supposed to represent the phallus of the sun god, but I'm starting to think that was a late-period corruption.
Given the symbolism we're seeing here, I'm also starting to think that the people putting on these little displays agree with that assessment.
POSTSCRIPT: Smoke signals. Beacons. Trying to get someone's attention. That's pretty much what I'm thinking here. 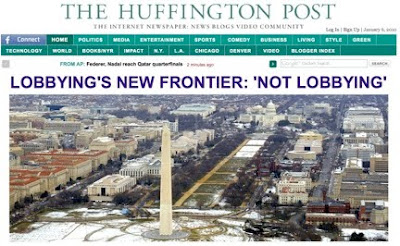 UPDATE: Oh, Huffpost. Such a saucy maiden.
UPDATE II: A lot of chatter here about how ridiculous and purposeless Dubai is. Well, yes- if you look at it from a conventional-thinking standpoint, it certainly is. But perhaps if you step outside the box, consider the big picture from perhaps an exopolitical point of view, maybe it isn't such an anomalous work of vanity.
Give that video another look, and think about these memes of mermaids and Sirius and all of the rest of it we've been looking at on this blog for the past three years. The people building this city are not idiots, and don't dispense with these kinds of sums as easily as we'd like to imagine.
Maybe there is some other agenda here, one we can only speculate upon. But to put it all together you need to step outside of the pre-approved modes of thinking that are constantly pounded into our heads by establishment shills morning, noon and night.
Ask yourself this - why spend all of that time and money putting on displays that no one in the city itself can make heads or tails of?
As with Atlantis, the Burj firework display only makes sense if you are several thousand feet in the air. And both were designed to be viewable from orbit. It really makes you wonder. What is all of the constant fearmongering in the media -both mainstream and alternative- distracting us from? What is the right hand doing while we are so spellbound by the left?
at January 06, 2010