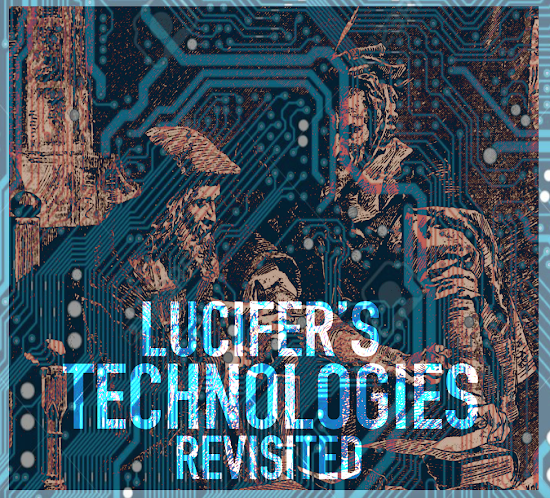 By far the most popular series in the history of The Secret Sun was 2016's Lucifer's Technologies series, which looked at the explosive growth of computer technology following World War Two and argued that its birth may be a little weirder and more troubling than what you may have been told in school.
The things I found about the creation of the transistor and microprocessor - and the men behind their creation - not only changed the way I saw high technology but eventually led me to realize that this world is powered by sorcerers and not scientists.
I know, I know, I know: that's crazy talk. Well, it sounds like it, until you peek behind the curtain and realize that technology is actually just the plumbing and that sorcery is the water that runs through it.
And also, unfortunately, the sewage.
Despite what the aging acolytes of the Enlightenment might wish, computers have only strengthened the power of the supernatural on this world. We've just been conditioned by Harry Potter and Hollywood to think that spirits are ghosts, demons have horns and tails, and magic is all just hocus pocus.
A lot of people tend not to realize that we are dealing with forces and energies here, not cartoon characters. Forces taken extremely seriously throughout our history, by men with far more brains, discernment and life-experience than any of our current crop of overprivileged academic idiots could even dream of.
Listen, I'm no different. I used to scoff at demonic possession as the delusional fantasies of attention-starved Pentecostals and silly grifters. It wasn't until I started seeing so many people going off the rails and behaving in ways that ordinary psychology couldn't adequately explain that I was forced to reconsider my position.
There's probably a lot I might ultimately revise or remove in this series, and there's certain a devil of a lot I'd like to add. But overall I think it's far more relevant today than it was five years ago.
A lot of the worries about the dangers of high-tech control, worries that seemed like paranoid delusions in 2016, are now national mandates. And there's also the inexplicable sudden interest the elite media has in the UFO topic to factor in, despite near-total disinterest on the public's part.
Oh, and we also have five years of face-kickingly obvious mass rituals to throw into the mix as well. Gotthard Tunnel, to name one, hadn't even taken place yet when I originally wrote the series.

So brew yourself a nice hot beverage and dive in.

Part One: Our Deal with the Devil Comes Due

Part Two: Fallen from the Sky

Part Four: The Devil's in the Details

Part Seven: "From the Brow of Zeus"

Part Eight: The Eyeblink of History

Part Thirteen: Science is Not Enough

Part Fourteen: ESTimate of the Situation

You can enlighten the rest of us in the Den of Intrigue.