"Children of the Flaming Wheel" 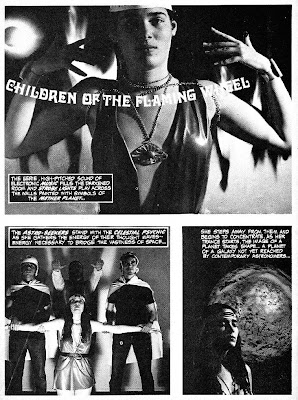 I could try to preface or frame this photocomic somehow, but there's no way I could make it any less strange and wacked out than it already is.
Longtime Secret Sun readers know all about Jack Kirby and the absolute incongruity of his obsessions with the highest weirdness imaginable contrasted with his almost stultifying suburbanite life. I'd argue that the latter not only enabled but fueled the former. 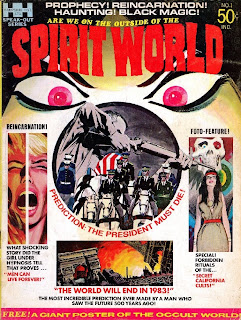 Something very, very powerful hit Kirby around '65 or '66, and transformed him from an already imaginative man into a psychedelic shaman disguised as a freelance pencil pusher.
This story was sold on the cover of Kirby's Spirit World #1 as a kind of tabloid exposé of some California sex cult, but there's absolutely no connection there to the tripped-out ritual vision that Kirby is presenting, using his photocollage technique that he began toying with about the time that something blew the doors of his mind open.
It's interesting to note that this comic was essentially buried at the time by the publisher and distributor and then promptly canceled. 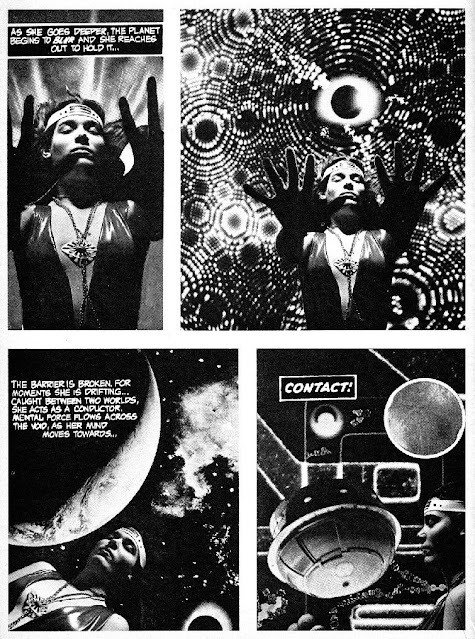 This whole story reads like minutes from a Typhonian OTO working or a from a Lab-9 session. Or perhaps both. It certainly doesn't read like a comic book story, even from the tripped-out 70s. It's even stranger than a lot of the acid-drenched underground comix of Robert Crumb and Rick Griffin. 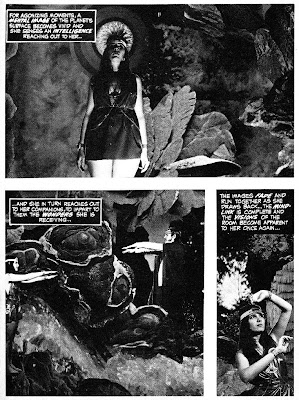 There's a lot, lot more where this all came from, most of which speaks to Kirby's psychedelic and alien fixations. But this story speaks to a thruline in Kirby's comics work about contact via psychic means, something that also runs through Gene Roddenberry's work, an equally unlikely conduit for this kind of insanity.
There's also a strange netherworld between fiction and reality in which these contacts are common, a twilight zone of the deeper mind that transcends simple imagination. And it terrifies a lot of people, which is why there's such a campaign to slam the doors of consciousness shut.

In a previous post, we looked at what reads like the minutes from an technoccult ritual in which young hippies contact alien artificial intelligences over the vast reaches of space using psychic projection.
Jack Kirby seemed to like the idea so much that it included it in a contemporaneous story, starring none other than our old friend, Jimmy Olsen.

click to enlarge
Jimmy Olsen was Kirby's first assignment for DC Comics following his long and successful stint at Marvel, where he and Stan Lee essentially revolutionized American pop culture. Kirby dropped the reader straight into a totally new universe for "Superman's Pal," in which the pair encountered "The DNA Project," created by one Dabney Donovan.
From Wikipedia:

Donovan had largely been accredited for the non-human creations of the Project, referred to as "DNAliens" (human beings cloned then genetically altered to discover superhuman potential while also giving them a more "alien" appearance)... there are also step-ups who call themselves "the Hairies," super hippies who have developed an evolved knowledge-base, and developed transport and defense technology beyond the understanding of modern day humans.

In this yarn, Superman and his "pal" take a techno-trip via the 'Solar-Phone', a kind of precursor to virtual reality with serious psychedelic overtones. Kirby introduced the story with this breathless prose:

Strange names in a strange world which as evolved in a great natural cavern beneath modern America!

This is the world of the Project- where the secret of the century has been kept! The harnessing of the DNA molecule!

The breaking of the genetic code!

...or is that the DMT molecule?
Kirby presents us with an idea seen in The Outer Limits - alien signals converted into musical tones - though here the tones then create psychedelic inner landscapes. In many ways this story is a sequel to the Children of the Flaming Wheel. 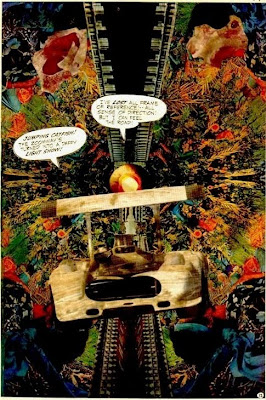 Kirby used the cut-up/collage technique to envision completely alien landscapes, ones not bound by the standard features you'd expect, like geometry, gravity, perspective, and so on. He began this while still at Marvel, with the Negative Zone and Ego, The Living Planet and so on.
The crappy comics printing never did the images justice, reducing psychedelic images like this to black and white, then overlaying globs of badly-separated color over them. It's amazing to think what comics readers (meaning "me") used to put up with to get their fix.

Like this- another story originally intended for Spirit World but printed in Weird Mystery, delving into Kirby's obsession with UFOs. Kirby's non-comic art was largely focused on images of aliens, ancient astronauts and of course, the gods. He often used the collage method to imagine truly alien-looking spacecraft.
After all, when you've drawn a few thousand comic stories dealing with the topic you have to do something different to break out of the old, predictable conventions, that have become so familiar as to not be very alien at all.

And much to the chagrin of a lot of older 70s fans, Kirby's alien fixation took over his comics work, as did his fixations on conspiracy, genetic manipulation, ancient astronauts, and so on. Spirit World seemed very much like a dry run for what was to come.
Strangely enough, Kirby's work - so dreadfully unfashionable at the time - has aged a lot better than all of the pretentious pseudo-relevant, pseudo-cosmic fluff that was popular then.