In the ancient myths, Hermes and Aphrodite were lovers and she bore an androgynous child to him called Hermaphroditus. However, in some tellings, their son was Eros. This frieze depicts Aphrodite presenting Hermes with Eros, who is well known to us as Cupid, the god of Love. To him our modern Lupercalia - Valentine's Day - is dedicated.

It's no surprise then that Charlie Kaufman's Eternal Sunshine of the Spotless Mind opens on (and revolves around) Valentine's Day. But the meeting between the film's Hermes and its Aphrodite takes place in semiotically-charged Montauk, Long Island, not in Egypt. Our Hermes is Joel Barrish, played by Jim Carrey.
He self-identifies as Hermes by constantly writing in his journal. 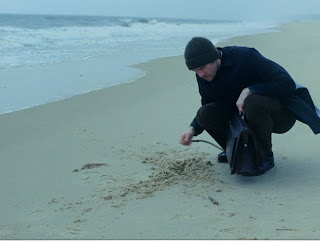 These modern mythological love stories seem to need a symbolic castration to summon the goddess of the story and Eternal Sunshine is no different. Here Joel digs in the sand with a stick underneath a cloudy sky. Much to Joel's frustration the stick breaks...

...and sure enough, in the very next second Aphrodite emerges out of the sea-foam, bringing the sunshine with her. This is Clementine, played by the luscious Kate Winslet. Take note of her orange sweatshirt, it pops up again.

The orange sweatshirt is reminiscent of the orange cloak Aprhrodite is draped in by one of the Horae as she herself rises from the sea-foam in her kteis. Unbeknownst to Joel and Clementine, this is not their first encounter.

This is, which we see towards the end of the picture. And again, Clementine is seen emerging from the surf, clad in orange.

Since this part of the story is told at the end of a reverse narrative, we see the castration symbolism after the two of them meet. Here, "Clem" takes a chicken drumstick from Joel's plate and takes a bite. Ouch.

This scene is from when Joel and Clementine unwittingly reunite after encountering each other on the beach at Montauk. Here Clementine asks Joel to show her the constellations, an act which has a precedent from Hermes and Aphrodite's reconciliation.

"Mercurius [Hermes] stirred by Venus’s [Aphrodite's] beauty, fell in love with her, and when she permitted no favours, became greatly downcast, as if in disgrace. Jove [Zeus] pitied him, and when Venus [Aphrodite] was bathing in the river Achelous he sent and eagle to take her sandal to Amythaonia of the Egyptians and give it to Mercurius [Hermes]. Venus [Aphrodite], in seeking for it, came to him who loved her, and so he, on attaining his desire, as a reward put the eagle in the sky [as the constellation Aquilla]. - Hyginus, Astronomica 2.16

But castration symbolism is not incidental to this film. Rather, castration is encoded into the very title of the film itself.
The title which is taken from a line from a poem by the English Freemason Alexander Pope, called "Eloisa to Abelard," published in - wait for it- the year 1717. Yes, that's the same year the first Freemasonic lodge was officially established.
“Eloisa to Abelard” was an elegy to Pierre Abelard, another of the countless great thinkers oppressed by the Church in the Middle Ages. In fact, Abelard was actually castrated for his love for a young student named Heloise, a name not-coincidentally derived from Helios. The relationship of Abelard and Heloise is mirrored in Eternal Sunshine by the love affair between Dr. Mierzwiak and his earnest young assistant, Mary. Charlie Kaufman also referred to "Eloisa to Abelard" in Being John Malkovich, which starred Hollywood's favorite Horus, John Cusack (more on him in the coming weeks).

We're then led to believe that Clem is indiscriminately promiscuous - or that Joel at least believes she is- and the conversation dealing with her suspected infidelities uses ambiguous pronouns in relation to gender. Their last argument before their split took pace after Clem returned home drunk at 3am and was over whether Clem f**ked some-one, not some "guy."

And true to form, Joel infers that Clem uses sex to get "people" to like her - again, a gender non-specific pronoun. Joel later expresses his fear that "she'll sooner or later go around f***ing everybody." Joel is irritated that she was out late but doesn't seem too shocked by the prospect that she'd be out having sex with a stranger.

Another of Clem's personality traits is her drinking. This is reminiscent of the Egyptian version of Aphrodite, Hathor (or Athyr). It's this writer's opinion that the name Katherine (ostensibly meaning "pure" in Greek) is ultimately derived from "Hathor."
Katherine can be broken down to Ka-Hathor-Ein or Ka-Athyr-Ein -- ein being the Greek suffix mean "to have" or "to be," and Ka meaning spirit or life force. Ka-Hathor-Ein would translate into "To Have the Spirit of Hathor." Saint Catherine is identified with the Sinai, which also housed the Cave of Hathor. The name "Kate" is the diminutive for Katherine.
Kate Winslet's middle name is Elizabeth, a name of ultimate Egyptian origin. It's ostensible translation is "My God is My Oath," but could also be a contraction of Eloah-Isis-Beth, meaning "House of Isis the Goddess."

But Egyptian word puzzles bring us back to Montauk, which is either an Indian tribe name or a convenient, crypto-Masonic codeword meaning "Montu the Hawk."
at March 18, 2008