The 40 Year-Old Virgin deals with Andy Stitzer, a sad sack stock room employee for a big box electronics store called Smart Tech. After his friends- Jay, Dave and Cal- discover Andy is a virgin during a poker game, they take it upon themselves to get him deflowered.
The movie's humor comes from sexual references, obviously, but also from gender and sexual identity confusion. Jay suggests Andy have his chest waxed and inadvertently sets Andy up with a transsexual prostitute whose services he employed. Cal and Dave rib each other with "You know how I know you're gay" jokes. At a speed dating event, Andy is hit on by an aggressive lesbian named Gina (pronounced with a long "i").
Interestingly, most of the women have feminine versions of male names. Andy's first date is named Nikki, his boss is named Paula, his replacement in the stockroom is named Bernadette. His love interest is named Trish (a pet form of Patricia, the feminine of Patrick, meaning "father") and one of her daughters is named Julia. What's more, Andy takes the passive role in relation to his dates, since he doesn't have a driver's license.
In addition to being a virgin ( a term more commonly identified with females), he's a geek and collects action figures and whatnot. But it's after a disastrous date with Nikki that the symbols start to get really interesting.

Here, while Andy whines about the date, Cal and Dave spend their break smashing flourescent light bulbs, highly suggestive of a castration ritual. As we shall see in many of these films, a symbolic castration works to summon the goddess of the drama, and this is film is no different. 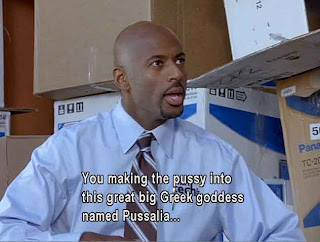 As if to punctuate this, Jay tells Andy that he is idealizing women, which is why he is unable to get in their pants. His language here is highly revealing, talking about the "great big Greek goddess," setting the stage for Trish's entrance.

Trish makes her appearance as soon as the boys come in from break. The owner of an Ebay resell store, she's not young or attractive enough for the salesmen to bother with, so she is handed off to Andy. Trish is looking for a VCR, but Andy advises her against it. Instead he steers her towards a dual VCR/DVD deck, a foreshadowing of the duality or ambiguity symbols which will recur throughout their relationship. The two hit it off instantly and Trish gives Andy her number, taking the aggressive role in the relationship.

Andy finally works up the courage to talk to Trish after being teased and goes into her store and asks her out. While this is taking place, an aspiring young transvestite is looking to buy a pair of high-heeled trannie boots. The boots soles are filled with water (read:"Aquarius") and contain twin plastic goldfish (read: "Pieces"). An extremely important clue.

While Cal and Dave do the "how I know you're gay" bit in the other room, Andy makes a date with Trish, who is symbolically castrating him by cutting lettuce, a phallic symbol to the Egyptians, from where all the mysteries ultimately stem.

Andy and Trish go to a Benihana restaurant where Trish has the waitresses sing Andy a Japanese birthday song, symbolizing his rebirth as Attis/Adonis/Osiris/whomever. 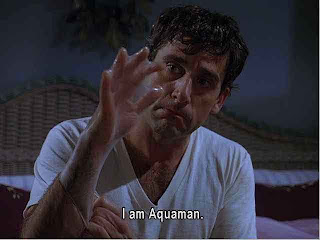 The two then go to Trish's house where their planned copulation goes awry when Trish's voluptuous daughter and her boyfriend walk in on them. On Trish's prompting, the two then decide to put off sex until the 20th date, much to Andy's relief.

On the 20th date Andy panics, setting in motion a series of comedic hijinks that result in Andy chasing Trish and her Volvo ("Vulva") station wagon on his bike. Trish's car is important here since one of Cybele's identifying attributes was her chariot.

Here is Cybele with her two pet lions, Atalanta and Hippomenes, whom Cybele turned into lions as punishment for having sex in her temple. This has a parallel in one of the subplots of the film when Trish forbids her daughter Marla ("Mary Magdalene") to have sex with her boyfriend. Andy is then driven by Marla to a sex clinic to help her get counseling.

Chasing after Trish in her chariot, Andy flies through a double-sided mobile billboard and lands on his back- this is symbolic death (and would be his actual death had it happened in real life). Now he will be raised by Trish, just as Cybele raised Attis, or Isis raised Osiris, or put your favorite fertility god and goddess name here.

While Trish raises Andy, she wears a shirt decorated with stars and planets and a peacock, which is a symbol of the Sun and resurrection. It is also sacred to Hera, Cybele's approximate equivalent in the Greek pantheon. Remember that by the Roman era, all of the ancient gods had been syncretized to the point that they were impossible to separate.

Once Andy is raised and on his feet, he and Trish kiss. A Shell gas station looms in the background. This is yet another clue in this semiotic treasure hunt.

The symbol for Shell has evolved over the years to depict a harmonization of gender opposites- the sunrise within a shell. The sunrise is the ultimate symbol of male virility and the shell is associated with goddesses like Aphrodite. The Greek word for "shell," kteis, is the same word for "vagina."

And, of course, as soon as Trish raises Andy from his symbolic death, we cut to a glorious morning Sun, when the Chymical Wedding shall take place. 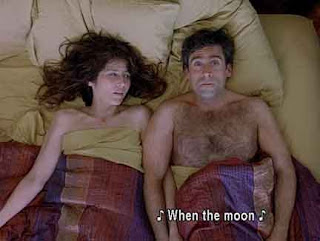 Following an extremely brief coupling, Andy shows inhuman virility by going immediately for a second round which lasts for two hours. His chest hair has miraculously grown back, showing his virility. And out of absolutely nowhere, he begins to sing "The Age of Aquarius."
Which isn't surprising, since that's what this film is really about (go back and look at those boots).

Suddenly the film itself seems like a prelude to this astrological ritual, celebrating the new age. All of the characters from the film take part, effectively negating their dramatic credibility within the context of the film. The point of the story is the feminized stockboy rising to a position of glory in the heavens.

Here we see Andy embrace the prostitute while singing the chorus.

Which of course, leads into the coda, welcoming the Sun into its new age.
There isn't a single shred of foreshadowing in the film's text referring to any of this. No Sixties references or nostalgia, no hippie characters, nothing. This is all completely out of nowhere.

"Age of Aquarius/Let the Sunshine In" were made a hit by the Fifth Dimension (of all bands) but the songs were from the musical Hair, whose poster here trumpets a Janus-like dualism, using a then-popular photographic process known as "solarization." Not coincidentally, Kubrick used a form of solarization for the Stargate sequence in his Masonic Solar hymn, 2001: A Space Odyssey.

The DVD film makes a very big deal about the 17 extra minutes of footage added to the theatrical version. We've seen that before, but here the context seems almost deliriously transparent. 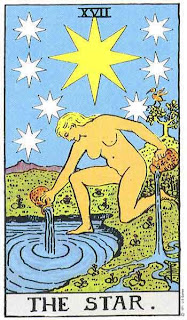 The 17th Trump of the Tarot is the Star, which depicts the water-bearer, identified with the constellation of Aquarius. In many popular depictions the water-bearer is female, but the figure is actually Ganymede, Zeus' ill-fated male lover.

So perhaps here is the source of all the gender-blurring in the film. Andy's job is to carry electronics, just as Ganymede carried water. Perhaps the symbolism is actually not part of a conditioning process for Watt's "androgynous agenda," but a ritual celebrating EXACTLY what the film EXPLICITLY celebrates, the dawning of the Age of Aquarius, symbolized by the androgynous Ganymede.
In this context, the Cybele symbolism makes perfect sense. When you realize that Freemasons and other Masonic entities have had an incalculable influence on the entertainment/industrial complex, and that the Masonic system is a direct descendant of the Mithraic mysteries, by rights, you have to look for Cybele, since the wives of the Mithraists were predominantly followers of Cybele.
Some have tried to rewrite history claiming that Mithraism was a first-century invention, but serious scholars agree that the Tauroctony depicts the ending of the Age of Taurus, which occurred in 1875 BC. Astrology was supremely important to the Mithraists, so it's certain that the faith had some root in that time period.
The blending of Tarot, Kabbalah, and Mystery symbolism makes perfect sense in context of the astrology symbolism. These traditions, as I've said, are all the same beneath the specific cultural trappings.
We've worked backwards here, starting with Alchemy and Kabbalah, and going back to the source- the primeval fertility rites of the Mysteries. Adam Kadmon is Adonis, is Attis, and further back Atum, the undivided god. The Greek definition of 'atom' is also 'undivided,' which isn't surprising since we know that all the Greek sages were educated in the Egyptian mystery schools.
I'll have more to say about this film, and will be looking at related stories in the near future. There are quite a few of them.
at March 11, 2008