Read part one of this article here

To recap, a green contagion has emanated forth from Clay Street Station, in the Boston subway system. The actual Boston subway is known as the "T", but in this episode it's known as the "M"- which is the 13th letter of the alphabet.
John "Anubis" Doggett is sent into the tunnels- just as initiates were sent into the tunnels of the Egyptian necropolises- to discover the source of the green contagion with three assistants, none of whom are up to the task. This parallels with the "three unworthy craftsmen" of Masonic ritual. And just as described in the Master Mason ceremony, Doggett is knocked unconscious from a blow to the head by the last of his assistants. When he rises his skin is green, just as Osiris' own skin was.

Newly risen as the Green Man, Doggett then encounters a mute boy, whose presence is completely unexplained. We never know his name or why he is in a subway tunnel. Where in the literature is there a mute boy, especially in the context of a ritual drama? 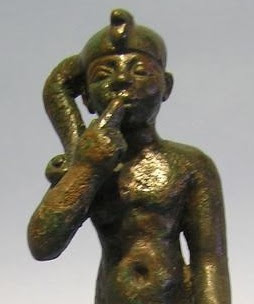 The Egyptian God of Silence. Harpocrates is Greek for the Egyptian Hoor (or Heru) -paar (or par/pa) -kraat (or kraath) and means "Horus the Child." Hoor-paar-kraat is the silent god whose minister, Aiwass, communicated The Book of the Law to the Prophet Ankh-af-na-khonsu.

In the New Comment, Harpocrates, the "Babe in the Egg of Blue", is described as not only the God of Silence, but as the Higher Self, the Holy Guardian Angel. "The connexion is with the symbolism of the Dwarf in Mythology" (see Besz)and "the Serpent with the Lion's Head." "

The boy then silently signals for Doggett to follow him. Which brings us straight to history's first Masonic order, the...

- The Riddle of the Sphinx, Part II

The mute boy leads Doggett into a room completely covered with the green contagion. Here water from Boston Harbor is leaking into the subway, carrying the microscopic Medusas. There was another green room in Boston that had an interesting history...


What the Goose and Gridiron Tavern is in the ancient annals of London Freemasonry The Green Dragon Tavern is to the memories of the Free-mason, of Boston and New England. In it and about it revolved many of the most exciting activities of the Boston Revolutionary times, not the least of which were the patriotic caucuses and plotting of the brethren who in those days held their lodge in that historic building.

Speaking of Boston Harbor, the Green Dragon Tavern was where the Boston Tea Party was planned.

Being the forgiving type, Doggett then rescues the assistant (Officer Bianco) who smacked him in the head, and carries him through the green room. I thought the shot of him lifting Bianco to be highly reminiscent of yet another part of the Masonic ritual...

[The Master Mason] proceeds to raise the candidate, alias the representative of the dead body of Hiram Abiff. He (the candidate) is raised on what is called the five points of fellowship, which are foot to foot, knee to knee, breast to breast, hand to back and mouth to ear. This is done by putting the inside of your right foot to the inside of the right foot of the person to whom you are going to give the word, the inside of your knee to his, laying your right breast against his, your left hands on the back of each other, and your mouths to each other's ear (in which position alone you are permitted to give the word), and whisper the word Mahhahbone ... [which] signifies marrow in the bone.

- William Morgan, Illustrations of Masonry by One of the Fraternity Who has Devoted Thirty Years to the Subject

After this, Doggett then rigs a gun to the third rail as a train approaches which neutralizes the Medusa contagion through an electrical short circuit. Yeah, it doesn't make much sense to me either. Which probably got me looking into this in the first place.

So what's this story really about? A case could be made that along with the usual Ten Thirteen critique of secret cabals, "Medusa," is actually about the process of revelation that The X-Files itself is a major part of. What was once hidden and underground with groups like Freemasonry is becoming part of the larger culture.
This process is symbolized by the train full of commuters (sent by the hard-assed Chris Carter stand-in) riding through the contagion (which is dangerous only to adult males) coming from the underground green room, which symbolizes the Green Dragon Tavern and its underground Masonic conspirators.

There's a major paradigm shift going on around us, as esoteric concepts are becoming exoteric. The generation of kids raised on things like Yu-Gi-Oh and Harry Potter have been exposed to esoteric concepts that two hundred years ago were spoken only in whispers in basements or secluded rooms in publick houses.
Freemasonry and all of its offshoots are completely redundant to these kids, the weakest of tea compared to what you can see every day on the Disney Channel- or on The X-Files.
at March 01, 2008