An Elegy for The Last Giant

Well, that about seals it: the great postwar explosion of lowbrow and pop culture is finally dead. The cause of death was blood-loss from thousands of cuts, in what seems to be slow-motion suicide. And the last iconic master of the form has now passed from this plane to put the final punctuation on the story.

Richard "Gore" Corben, who ascended to Valhalla at the age of 80 this week, is what you got when you combined the chops and unbridled tumescence of Frank Frazetta, the in-born strangeness and manic work ethic of Jack Kirby, and the numinous, nightmarish, intimate insanity of HP Lovecraft.

Before we eulogize the Last Giant, let me get a couple announcements out of the way... 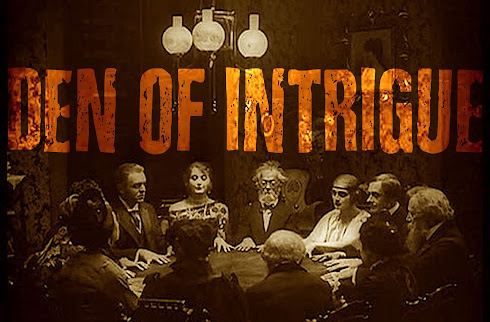 First up is the all-new, all-different Den of Intrigue. I'd gotten a lot of feedback on the comments sections from readers recently and their wishes are my command.

We're starting fresh, with clear guidelines for posting and comment moderation. Hopefully a lot of folks who'd been scared off by the Wild West saloon vibe will now find a dark and cozy Victorian parlor instead. 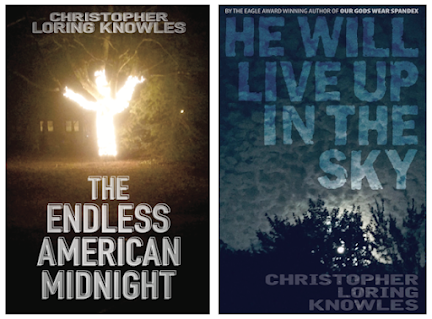 Second, I realize times are tough but a lot of folks are still starving for Secret Sunly infotainment. So I'm very excited to announce I'm working up special ePub editions of The Endless American Midnight and He Will Live Up in the Sky that you can put in your stocking for a very nice price straight from the Sun. I'm hoping to get them both wrapped up and ready the week before Christmas. Stay tuned for further instructions.
If you've ordered hard copy and want an ePub to go with it, just drop me a line and I'll shoot one over when they're ready, gratis.
Quick update: The paperbacks have been ordered so I'm just waiting to be buried under dozens of cartons. Hopefully won't be waiting too long, but 'tis the season and all that.

Gore left the stage at just the right time. Kirby checked out while the mainstream (read: newsstand) comics market was finally collapsing for good. Frazetta did so just as the fetid tsunami of Woke was about to flood pop culture with their insane, intersectional ideologies. And now Gore leaves us as stage six Wokeinoma has utterly destroyed and despoiled what was left of mainstream pop culture.

Don't listen to the desperate wishful thinking: the citadel has fallen, and stark economic reality will eventually pick off any survivors. You saw what happened to the music industry, right? Well, that was just beta-testing. Now the real decimation begins.

Richard Corben was not only the ultimate antithesis of Woke, his art was like taking a rusty chainsaw to its bloated, blighted, blue-haired head. It was about as non-binary as a machine gun. Gore had been an amateur body builder before pursuing art full-time and like Frazetta, his heroes were all idealized versions of himself.  Quite literally so.

But Gore out-Frazetta'd Frazetta when it came to pure, unvarnished mesomorph worship. Everyone hero and heroine he drew was built for two things and two things only: fighting and fucking. When he hit his groove everything he drew was firm, sweaty and swole, even the backgrounds.  Even his women looked tumescent. 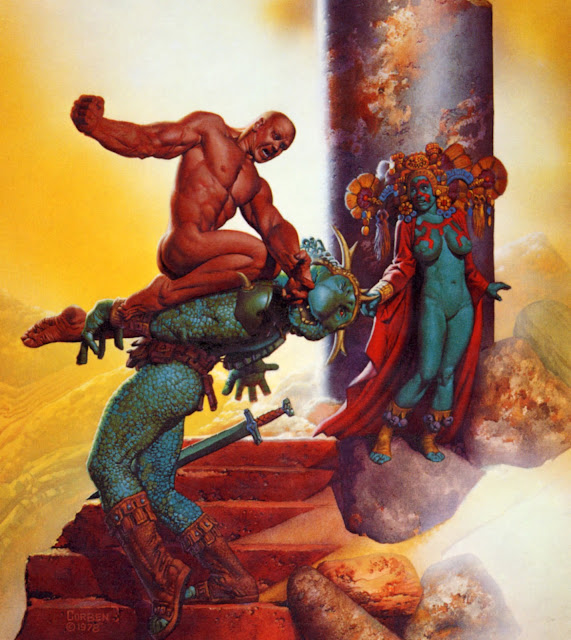 His art alternated between the Arcane (his horror work) and the Priapic (his fantasy). He started out in the still-thriving underground comics scene, and then ascended to the ground-level magazines like Creepy and Heavy Metal, the latter of which featured his iconic sword and sorcery strip, Den.

Corben's output was admirably prolific, and he even took time to create a new form of color separation without proofing or guides (translation: his way of doing seps was crazy hard).

And like Frazetta and Van Halen - both of whom have been eulogized here - Gore's work was like a blast of fresh mountain air after wallowing through the dank, depressed, defeated smog of post-Vietnam pop culture. 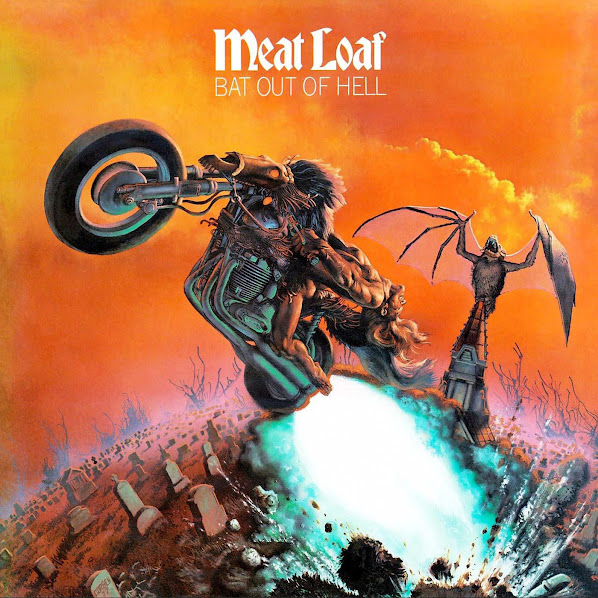 So it's no surprise that he was tapped to paint the cover of one of the best-selling LPs of all time. It's only fitting that this whacked-out van-art money-shot is almost quintessentially Corben: a witches' brew of Frazetta, Roger Dean and Larry Flynt. If this was all he ever painted, he'd still be a legend. 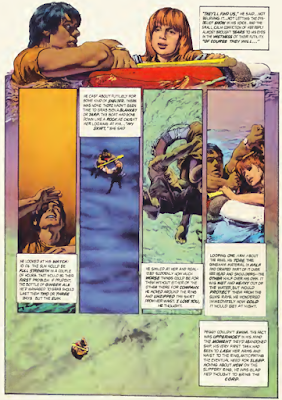 But Gore wasn't just all about Kirbyesque load-blowing. His horror work could be as quiet and intimate as his fantasy stories were loud and gaudy. Which is exactly why they are so horrifying.

A classic example is "In Deep," a story about two stranded honeymooners waiting for rescue after their sailboat capsizes. Corben's under-utilized gift for lyrical understatement in the heartbreakingly hopeful panels early on in the story only makes the eventual bloody horror all the more grueling. Precisely because Gore made it feel so real. 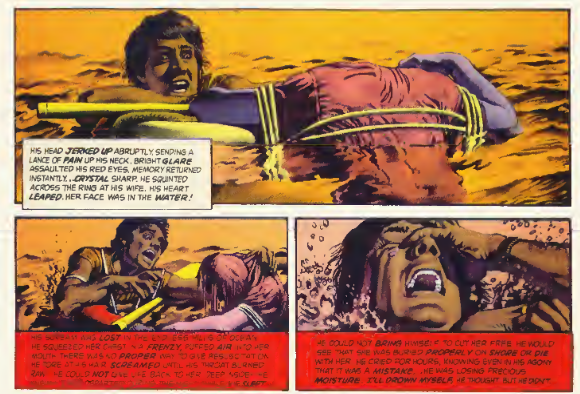 This scene is infinitely more traumatizing than the carnage that followed: the husband meant to stay awake at night to keep an eye on his wife- who didn't know how to swim- so could she sleep, but couldn't.
He awoke at sunrise to find her quietly, and almost apologetically, dead.
I believe to this day that this is one of the most horrific scenes ever depicted in any medium. I first read this story when I was 12 years old and believe me, IT FUCKED MY SHIT UP.
Still does.
I've also always wondered if it inspired this classic Eno masterwork. I know the Bald One read comics back in the day, and I could see him being a major Corben fan. 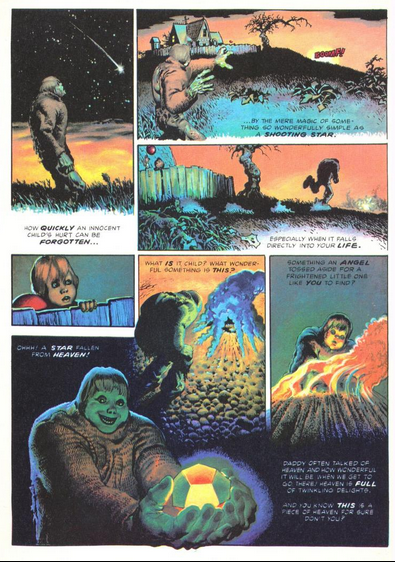 Another classic Corben masterwork was his rendering of Greg Potter's unbelievably disturbing rewrite of Frankenstein by way of Lovecraft, in which the monster has the head -and mind- of a small boy. It would've been really silly in the hands of a lesser artist but Gore gets under your skin by amping up the naive innocence of the monster with his illustrations. And stays there. 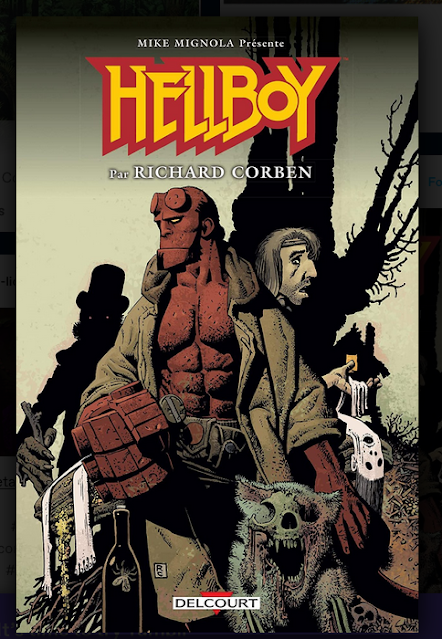 After many of years of self-publishing, Gore got work at the bigger publishers, including memorable runs on The Hulk, Cage and Hellblazer. But his best late-period work was for Hellboy, a character he was practically born to draw.
Don't be fooled by the movies- the best Hellboy stories are very quiet and intimate. And for my money, the only artist who could pull that moody atmosphere off as well as Mike Mignola was Gore. 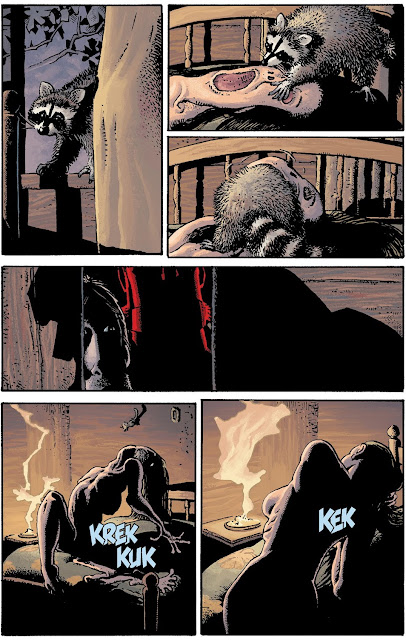 One of the scenes that Corben was born to draw was this one, in The Crooked Man. It has a shapeshifting Appalachian witch crawl back into her skin after taking the form of a raccoon. I'd go so far to say no other artist could have pulled this off like Gore did, not even Mignola himself. 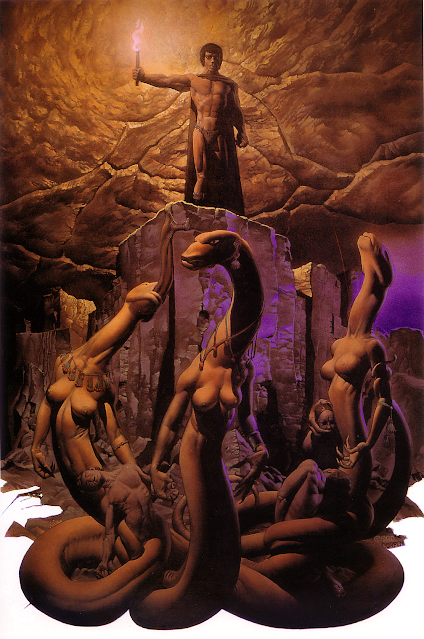 I'd go so far to say that you take any one of Corben's better stories and have more arcane energy crackling in the ether than all the grimoires ever written. At his best, he was like seeing Lovecraft at his most unhinged in living color. With boobies. 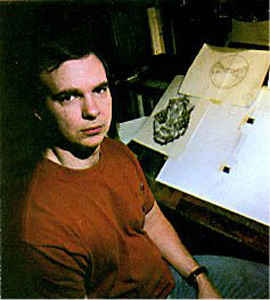 Gore never had the impact on the culture at large the way Frazetta and Kirby did, aside from Bat Out of Hell. His art is too weird, disturbing and nightmarish for the mainstream. Even a lot of comics fans were scared off by it. But he was there speaking to the right people, telling them all such terrible, terrible things, when it mattered.