One Mithras Morning in Nashville 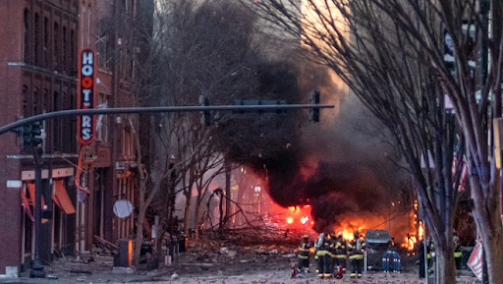 A lot of people have been talking about the very weird bombing event outside the AT&T building in Nashville. All kinds of strangeness seems to be emanating from it, all of which is quite interesting but has nothing to do with what caught my attention.
See, setting off an explosion on Christmas morning just screams "ritual" to me, and the AT&T connection only makes those screams louder. 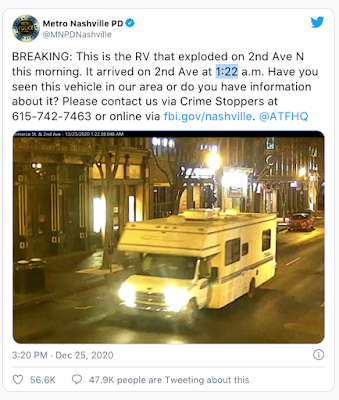 Back to our story. Here's a brief recap from ABC News:

The explosion occurred at 6:30 am on 2nd Ave N (& Commerce), in the city’s downtown area. Police described the blast, which has been linked to an RV, as “significant” and said it was likely intentional. Three people were taken to a local hospital, though none of their injuries are believed to be critical.

Human remains were discovered amid the blast debris, and investigators worked to determine if they belonged to the RV owner. Multiple law enforcement sources briefed on the investigation told ABC News the suspect was identified as Warner of Antioch, Tennessee, a suburb of Nashville.

Douglas Korneski, the special agent in charge of the FBI's Memphis field office, told reporters that investigators were able to make the match quickly after they obtained DNA from Warner's home.

The explosion was in front of the AT&T Building at 166 2nd Avenue.

The BellSouth Building is located at 333 Commerce Street in Nashville, Tennessee and was completed in 1994. This building was designed by Earl Swensson Associates and stands 617 feet tall with 33 floors. BellSouth is nicknamed "The Batman Building" due to its resemblance to the costumed super hero's mask. This building is also the tallest in all of Tennessee.

Some familiar numbers there, no? But the more interesting part of this story connects to what I've been talking about quite a bit lately and that's the secret god-- well, one of the two primary secret gods-- of the corporate elite. 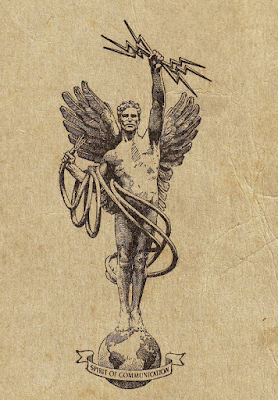 AT&Ts official symbol is not the one you see on signs, it's "The Genius of Electricity" AKA "The Spirit of Communication." And as we've been talking about for a very, very long time here, "Golden Boy" is just straight-up, balls-out Mithras. 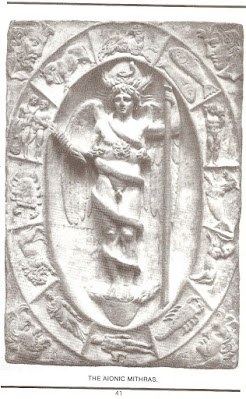 Specifically, Mithras is his guise as Aion, God of Infinite Time. Saturn, essentially. 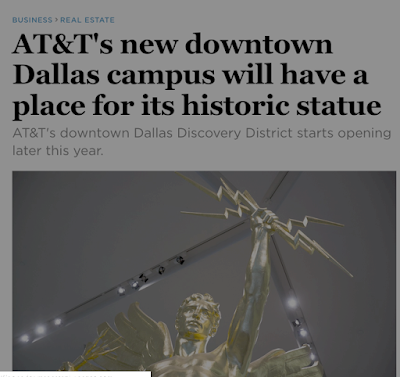 Golden Boy once stood just down the road from Trump National and now sits pretty in the "Dallas Discovery District"... 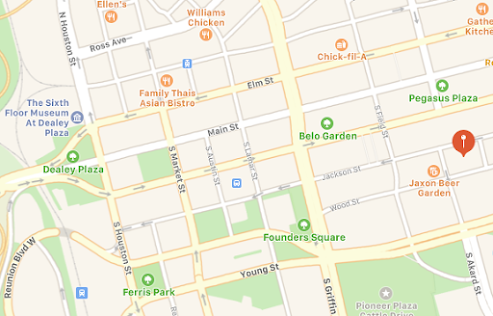 ... just a short hop from Dealey Plaza, where another President who pissed off the Deep State met his maker. I don't know if there's a connection to all the election theories bouncing around and I don't much care. I'm after the ritualism at work.*
Like the fact that Mithras is often identified with December 25 (the Nativity of the Unconquerable Sun in Ancient Rome), and the bombing took place shortly before sunrise.
So we're looking at the rebirth of Mithras here, which seems kind of significant to me. Read this:

An 1,800-year-old temple in northern England that is dedicated to the god Mithras was built to align with the rising sun on Dec. 25, a physics professor has found.
The temple is located beside a Roman fort in Carrawburgh, near Hadrian's Wall, which served as the most northerly frontier to the Roman Empire, beginning around A.D. 122.
Some modern-day scholars believe that the Romans celebrated Mithras' birthday on Dec. 25 — the same day eventually chosen by Christians to celebrate the birth of Christ.

122? Why does that sound familiar?

According to Nashville police, a white RV drove onto 2nd Avenue North around 1:22 a.m. on December 25, Christmas Day. Police later found the vehicle parked outside an AT&T transmission building, after receiving reports of gunshots around 5:30 a.m.

Then there's the fact that the guy they're blaming for the bombing is from Antioch... 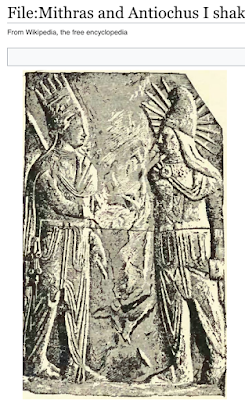 ... since the probable founding father of Mithraism was one Antiochus Theos the First, son of Mithridates ("Bestowed by Mithras"). Here is Antiochus doing what is almost certainly a funny handshake with his father's patron god.
So let's add it up:
• December 25th identified with Mithras
• Sunrise on December 25th, identified with Mithras' birth
• AT&T uses Mithras as its official symbol
• Accused bomber from Antioch, which shares name with Antiochus, founder of Mithraism
• There was the Great Conjunction of Jupiter-Amun and Mithras on the 21st.
Huh. Well now.
UPDATE: "Downtown" by Petula Clark was played during the event in Nashville. Being the hopeless X-Files obsessive I am I feel I am qualified to mention that song was used in tenth season episode "Home Again," which also featured the incipherable Tim Armstrong of Rancid. 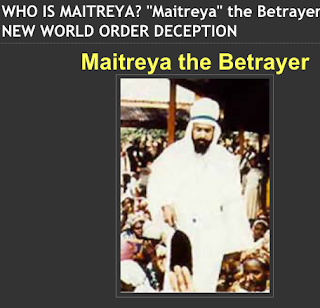 But here's another ingredient to throw into the stew: I'm starting to get the feeling that Mithras is most likely this "Maitreya" you've probably stumbled across in your conspiracy travels:

Some have speculated that inspiration for Maitreya may have come from Mithra, the ancient Indo-Iranian deity. The primary comparison between the two characters appears to be the similarity of their names, while a secondary comparison is that both were expected to come in the future.

Paul Williams claims that some Zoroastrian ideas like Saoshyant influenced the beliefs about Maitreya, such as "expectations of a heavenly helper, the need to opt for positive righteousness, the future millennium, and universal salvation". Possible objections are that these characteristics are not unique to Zoroastrianism, nor are they necessarily characteristic of the belief in Maitreya. 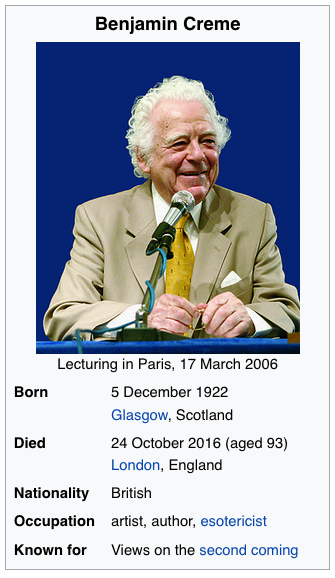 Maitreya was seeded into the Christian conspirasphere via a Scottish nutcase and follower of Theosophist nutcase Alice Bailey known as Benjamin Creme, who used to run an organization called Share International.
Here's Share's pitch for their "World Teacher":

He has been expected for generations by all of the major religions. Christians know Him as the Christ, and expect His imminent return. Jews await Him as the Messiah; Hindus look for the coming of Krishna; Buddhists expect Him as Maitreya Buddha; and Muslims anticipate the Imam Mahdi or Messiah.

The names may be different, but many believe they all refer to the same individual: the World Teacher, whose name is Maitreya (My-'tray-ah). Preferring to be known simply as the Teacher, Maitreya has not come as a religious leader, or to found a new religion, but as a teacher and guide for people of every religion and those of no religion.

He will launch a call to action to save the millions of people who starve to death every year in a world of plenty. Among Maitreya's recommendations will be a shift in social priorities so that adequate food, housing, clothing, education, and medical care become universal rights.

Under Maitreya's inspiration, humanity itself will make the required changes and create a saner and more just world for all.

Gosh, if I were the paranoid type I'd think maybe someone is preparing the way for Mithreya's grand entrance upon the world by fomenting a worldwide crisis or something. Maybe we'll finally be forced to adopt the mithraic system.

Oops, I meant the metric system.

* For instance, note Pegasus Plaza along JFKs parade route. We'll get to that in a future post
at December 28, 2020