Haunting of Hill House, or (Don't) Want to Believe 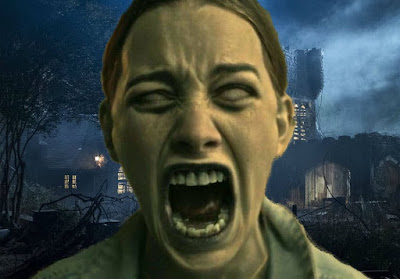 There's this great line in Jeff Kripal's 2011 pop culture opus. Mutants & Mystics. It goes something like, "If the motto of The X-Files was: "I Want to Believe," the motto of John Keel was: "Don't."

As time goes on I appreciate the deep wisdom that John Keel dispensed more and more, and have come to see the man as a genuine prophet.


So anyway, my wife and I recently watched The Haunting of Hill House, the not-even-remotely-based on the Shirley Jackson novel Netflix show. The book has been loosely-adapted twice before in 1963 and 1999.†

I can't say it was Requiem-worthy, or even Glitch-worthy, but it certainly did command our attention, despite the two of us finding most of the characters extraordinarily hateful and generally loathsome.
....................
There were some other off-notes in the series (such as some 70s-vintage tokenism masquerading as diversity, which is undoubtedly the fault of the studio and/or Netflix clownsocks) but otherwise it's an incredibly tightly-written, ingeniously-constructed tour de force that makes use of the limited series format in a way I haven't seen before.

We'd previously binged Maniac and had some jolly good fun with that series (even if I wished there was more Julia Garner in it-- you do know I love my diminutive redheads) but I can't say it really moved into my head all that much.

I'm the first to admit I'm a tough audience, having consumed such obscene amounts of pop culture over my half-century, but going into Hill House knowing next to nothing about it got some mental-juice flowing.

Especially on account of me having, y'know, kind of lived it.
....................
Yeah, so if you've been reading this blog for a long time you'll know I've had a lot of personal experience with the paranormal, which is probably why so much of my life has been so crappy (or maybe it's the other way around). At least John Keel would think so.

And not just back in the pre-cellphone days when I was a wee wane and we were all essentially superstitious cave-dwellers in earth-toned polyester.

I really, really can't go into any detail on this but there was what some might call a haunting episode experienced and witnessed by a number of different people (including myself) just two years back.

I guess some might call it classic poltergeist stuff-- things falling from walls and shelves of their own accord, phones and lights being fucked with, etc etc-- but only if they didn't know the back-story.

I'm not even remotely trying to prove anything here because it was an absolute fucking nightmare, like a never - ending episode of Supernatural circa Season Five.

I wish--like you can't even fucking imagine-- that it never happened.* Given the timing, it's safe to say a lot of the shit I'd been blogging about in real-time here feels like a string of omens in hindsight.
....................
A miserable, horrible, depressing string of omens. My wife said it best during this spectral shitshow: "Everything is terrible now."

So to all those people who have been complaining (particularly on Facebook) that my outlook has gotten considerably darker over the past couple of years, well, now you know why.

Well, part of the reason, at least

SO YEAH, GHOSTS ARE REAL

Either to you or to someone you care very deeply about.

And as much as I hate to say it, the same is probably true of UFO sightings as well.

And if you don't think ghosts or poltergeists are real? Well, then I am very, very happy for you. Plus, envious.

If you're truly OGSS then you'll remember that I lived Haunting of Hill House. Specifically, in the house my father rented on Oak Street in Cohasset in the mid-70s. As I wrote in "My Favorite Nightmares":


One of my very worst nightmares occurred in a house that otherwise responsible and rational people believed to be haunted. So much so that a spirit medium was called in to "cleanse" the house. A family friend spent the night and mistook the entity for another houseguest, only to find out the next morning that no such person existed.

Weirder still, when she returned to her own house, it was crawling with snakes (highly unusual, if not unheard of, for the beachfront neighborhood she lived in). That story stuck with me, believe it.

I never saw or sensed anything there, at least not consciously. But according to the medium, it was a protective spirit.

With the benefit of hindsight though, I remembered since that I had some other fucking horrible nightmares in that house, like literal piss-the-bed nightmares there. From the post again:


Hole in the Wall: I'm 7 or 8 (I had this nightmare in the haunted house but it took place in Braintree). My sister and I had switched rooms for some reason. I'm in her room, and we're playing with giant Disneyland-type cartoon characters. We're very happy, but it's time for me to go to bed.

I open the door to my room, but there's a man standing there in the dark. I knock on my mother's door and open it and stand by the hole my father punched in the bedroom wall before he left.

But the lightning is flashing in her room, and she screams at me when I tell her there's someone in my room. I can't hear her over the sound of the storm. Suddenly a hand comes out of the hole in the wall and grabs my arm.

Now let me just say that there's a perfectly reasonable explanation for my nightmares back then, that being a lot of really bad shit had gone down (and would go down as well; the Ghost Year ended with that boy's shooting death that OG Sunners will also remember).

But even so, that particular bedpisser pretty much set the gold standard. I don't remember the other ones precisely and don't care to, now that you mentioned it. Thanks for asking.

....................
I'll split the rest of it into a second part so we can really dig into the meat of this extraordinary work, because I think there're a lot of interesting themes that people aren't doing like we could do them here on the Sun.
....................
That being said, there was one particular scene in Hill House that really messed with my fragile brains. It's #7 on the video so if you watched the series you know what I'm referring to. And if you haven't you can skip it this bit.

The scene messed with my brains because it was all-too-reminiscent of my very worst-ever nightmare, a nightmare that was unlike all the others in that it seemed to take place in the real world as I knew it and not some dreamlike variation thereto.

As I remember it, it took place in real time and was predicated on a mundanely-realistic premise. Namely, my mother leaving me at home by myself while she ran down to Capitol Market for bread and milk before they closed.
....................
From 2011:

Knock, Knock: This was the worst of them all, because it was the most plausible. It's 9 o'clock at night. My mother tells me she has to run down to Weymouth Landing to the store. I ask here to take me with her, because I'm afraid to be home alone. She gets irritated and tells me she won't be long. She leaves and I sit in the kitchen alone.

Then a knock comes at the back door but I don't see anyone there. I'm scared shitless. It comes again. I sit there terrified. Again. And then it stops.

Then all at once all of the doors and drawers in the house begin opening and closing by themselves, violently and rapidly.

Comment: This one never fails to put goosebumps on my forearms, since I'm only 99.9% convinced it didn't actually happen, and I can't remember in the context of waking up in terror like the rest of them.

Now, let me just say that there's a possible real-world inspiration--a very compelling one, in fact-- for this nightmare, something else I really don't want to talk about here. I'm not being a tease-douche, I'm just offering alternatives.

Even so, that one fucked me up for a long time and seeing a kind of variation of it in Hill House wasn't really exactly my favorite television viewing experience ever.

Any stories you have that may have made the news or some such similar documentation are especially appreciated, though not required. If these experiences were traumatizing it might do you some good to talk about them with like-minded folk.

In the next post, we'll dig into the series itself. Like I said, there are a lot of themes that I want to explore that I'm not seeing explored elsewhere, especially the heavy Twin Peaks and X-Files influences here.

By the way, you do realize they're all dead and trapped in the Red Room in the end, right?


† Because of course, the first adaption, The Haunting, was first released four days before a certain you-know-whom's birthday...
..................
* This post was written when all that horror finally calmed down.