"Mouse Kontrol Ultra," or Ascension of the New Metatron 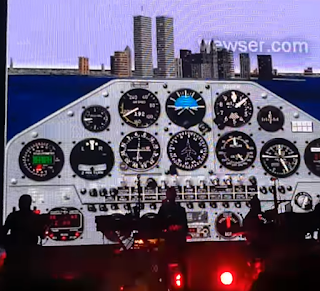 2019 seems to be recognized as a pivotal year of some kind by a number of different observers so I guess it's appropriate that Massive Attack is taking its Mezzanine 21st Anniversary extravaganza out on the road, along with MK-Ultra's own Adam Curtis furnishing the visuals.

I think it is safe to say that this will be another interesting year (in the Chinese-curse sense) if the augurs accompanying the tour's kickoff on Monday. Especially since a certain someone is along for this ride... 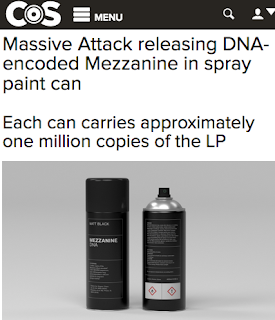 I realize I should be, but I've never been a huge fan of Mezzanine. I like MA's previous albums Blue Lines and Protection quite a bit, but found Mezzanine to be a bit too predictable and one-note, sort of a Trip-Hop-for-Export kind of thing.

Mind you, the movement had been appropriated and exploited pretty savagely by the time of its release (you couldn't turn on a TV without hearing fake Trip-Hop somewhere in the background) so the whole sound had kind of lost its sting.

But do note that the album has been encoded in DNA and is now available as spray paint, quite possibly a nod to MA leader "3D" being assumed by many to be the man behind Banksy. I'm not personally aware of any other pop culture artifact that's been garnered the same honor, in fact the only other thing I've seen encoded is the Bible.

So make of that what you will. 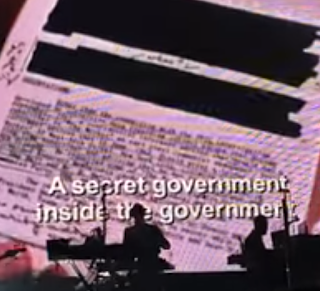 The tour (does anyone else think at 21st anniversary is a weird landmark to celebrate?) also continues Massive Attack's ongoing collaboration with British documentarian Adam Curtis (HyperNormalisation), who clearly seems to spend a lot of his free time surfing conspiracy channels on YouTube. 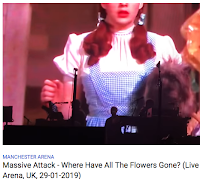 Curtis' video collages are rife with Conspiracist, Apocalyptic, and Synchromystic-adjacent imagery and text, albeit leavened with the crypto-Fabian tut-tutting you'd expect from a BBC producer.

But I will say that this approach is simply a higher-tech version of the video presentations that The Clash (an acknowledged touchstone for Massive Attack) featured on their stage-sets, which were always appreciated when they lapsed into a boring momentum-killer like "Jimmy Jazz" or "Junco Partner." 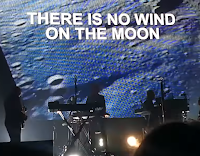 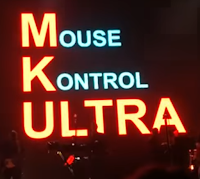 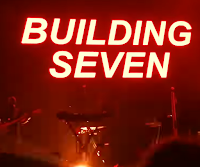 These screenshots all come from one song (an Ultravox cover) and demonstrate that Curtis is certainly familiar with many of the central conspiracy tropes. He intersperses these cards with old footage of people mindlessly dancing to pop music, a message that many out there would certainly appreciate, I'm sure.

And of course the big story for this tour is the presence of the Oracle of our ongoing Apocalypse, none other than Our Lady, Queen Dowager of Sibyls herself. I am pleased to see she seems more comfortable onstage than in times past and her voice seems in fine form as well.

That being said, I'm not really a huge fan of her singing on Mezzanine. It's a major comedown from the tour de force performances she gave with the Cocteau Twins on their final tour, the mind-boggling power and range of her gifts boiled down to a sultry whisper.

But before we go deeper into Massive, MK-ULTRA and the Sibyl, let's take a quick look at some of the signs and portents heralding this latest act in the great Mystery Play of our times... 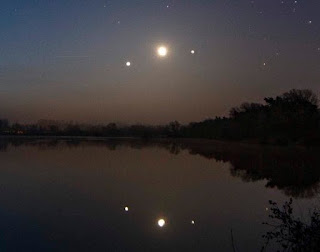 So we just got done looking at the avalanche of rampant Jupiter symbolism connected to the media's ritual scapegoating of insubordinate schoolboys, and lo and behold this week brings us a Syzygy of Jupiter, the Moon and Venus.

Seeing how the boys were not all murdered-- as the instigators of the ritual openly and repeatedly called for-- I'm thinking old Jupes is going to be ripping some major chunks out of mediaoid asses in the days and weeks to come.

In fact, I think he already got started.

The Horned and Hidden God is a lot of things, but tolerant of fuck-ups he is not. Especially when it comes to his supper. 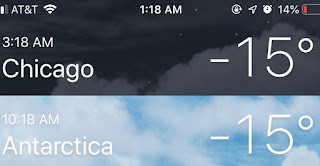 In light of another rapidly-unraveling incitement ritual in the Windy City, it should be noted that Chi-town is currently colder than Victoria Land. The temperatures have been perilously cold especially at night, which might discourage random gangs of MAGAites from prowling the deserted streets looking for random micro-celebrities to assault. At least by my reckoning. 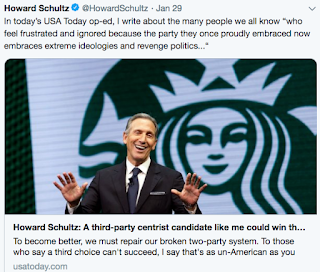 Because I am absolutely right about everything all the time (especially when I'm wrong), former Starbucks CEO Howard Schultz has answered the siren song of politics and has decided to throw his crown into the ring for 2020.

No word yet if he sought the guidance of the Sibyl before making his announcement. My guess is no. 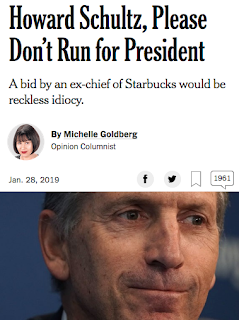 The announcement roused The Langley Town Crier (AKA The New York Times), to lead the charge against his independent candidacy, which subsequently set the demon-possessed NPCs to launch angry hashtags at Schultz and --inevitably-- kick off a vicious harassment campaign aimed at wage-slaves toiling for the company the would-be Commander-in-Chief no longer even works for.

Yes, those are the same demon-possessed hatefreaks that Schultz endlessly pandered to during his time at the overpriced-coffee monger.

I have no idea what this candidacy is about and don't much care. I suppose it's some kind of ritual or another but what isn't anymore? 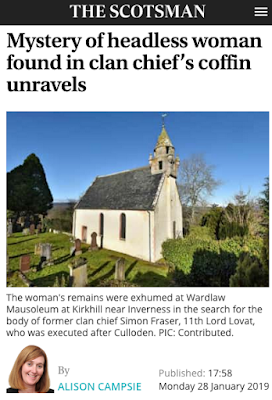 Speaking of rituals, we also hear news on that headless body found in Simon Fraser's coffin, which feels all too reminiscent to me of some kind of elite Headless Rite (AKA "the Bornless Rite").

These are the same Frasers who sold Boleskine House to weird old Uncle Aleister. Note that Frasers are featured in Outlander which I would rather eat earthworms than watch. Your mileage may vary. 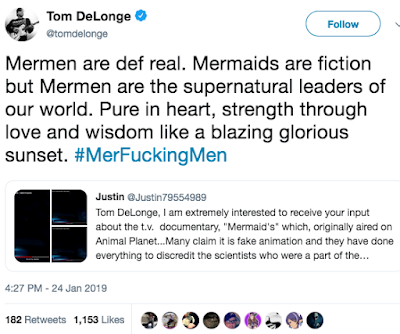 I got nothing. You figure it out. 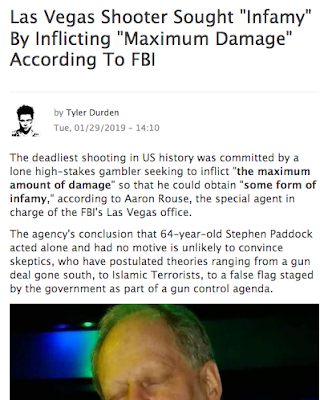 Speaking of which, the FBI released a zesty, totally-evidence-free analysis of Stephen ("Garland") Paddock's alleged shooting spree to coincide with the Sibyl's return to the stage. This Rouse fellow looks like he has a bright future in screenwriting. 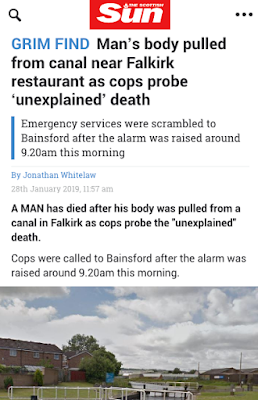 Speaking of paddocks, a body of a missing man was pulled out of a canal in Falkirk on Monday... 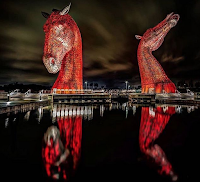 ...just a wee walk down the auld lane from the Kelpie's paddock. Weird timing, don't you think?

Which brings us back to the show...

Curtis and Massive Attack first joined forces in 2013 for a series of shows also featuring a certain Sibyl of some note. And as you can see, Curtis is clearly on a MKULTRA bender going on several years now.

So weird they'd enlist Lady Fraser for this, don't you think? I mean, who could have ever imagined that?

Well, other than me, I mean.

As you can plainly see, Curtis is very plainly influenced by the brainwashing film shown in the classic 70s conspiracy caper, The Parallax View. Which kind of makes you wonder, what's that old boy really up to? I mean, this is a classic scene and all but to make it your career? Well, it takes all kinds.

Curtis even teamed up with a dance company for 2017s MK-ULTRA ballet, which got quite a bit of attention in the press, given Curtis' notoriety for HyperNormalisation. If you haven't seen the ballet it was essentially Massive Attack vs. Adam Curtis crossed with Sprockets.


Seeing that HyperNormalisation was so Trump-o-centric and that the Massive Attack vs. Adam Curtis show played a mere block away from Trump Palace when it came to New York, it should be noted that it did so the week Trump announced to Larry King that he was seriously considering a presidential run.

Remember I made that postulation that people in high places like to use this woman to rub on their own workings for extra luck? Good times. 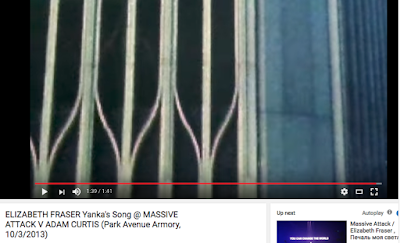 And yes, that's the old World Trade Center flashed at the end of Our Lady's performance of "Yanka's Song," originally written by a Russian singer who committed suicide by drowning.

Which of course leads us back to Our Lady's starring role in The Millennium Dome Show. If you haven't heard of that, I'd recommend you click that link.

So MK-ULTRA is definitely a thing with these characters, which is especially trenchant in this case given that that program segued into the psychic-spying industrial complex.

Which, I would argue, was one of the core mission statements all along. Creating oracles, I mean. Training psychics, preferably vulnerable young girls. Often with very ugly, very nasty methods indeed.

Just like in the olden days of Greece, Rome, Egypt and everywhere else on the planet all throughout human history. Like, y'know, you see in Stranger Things, sort of. 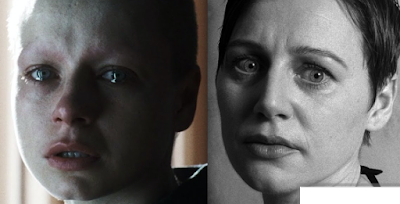 Or better yet, Minority Report.

For it is written, "...MKULTRA monster Ewen Cameron was born and raised twenty minutes up the road from (Elizabeth) Fraser and consulted with doctors in the area working on similar programs at hellholes like Lennox Castle Hospital, programs that reportedly survived well into the 80s and possibly beyond."

What exactly did Fraser's Stirlingshire neighbor Cameron do to his subjects?

Psychic driving was a psychiatric procedure of the 1950s and 1960s in which patients were subjected to a continuously repeated audio message on a looped tape to alter their behaviour.

In psychic driving, patients were often exposed to hundreds of thousands of repetitions of a single statement over the course of their treatment.


Tape loops, you say? Where else do we see tape loops a lot? 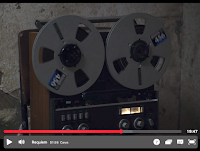 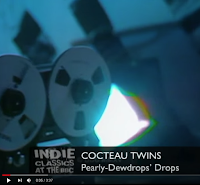 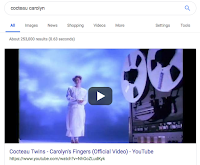 Makes you wonder what Curtis might know that most of the rest of us don't, given the MK-ULTRA and Apocalypse stuff, doesn't it?

Especially since some of the numbers Fraser performs are more than a bit repetitive and are accompanied by rather unsettling (read:"terrifying") visuals.

In fact, the "frames removed" in this performance were originally footage of maimed and mutilated victims of war. They were reportedly shown the night before in Glasgow but apparently aroused quite of bit of complaint from punters.

It's so weird how the soft, sweet vocals of a humble, middle-aged Scottish lady seem to go so well with scenes plucked from our modern waking nightmare, don't you think? What's that all about?

Actually, I've had a very long time to accept this paradox. I've often told you how when I first really fell under this woman's spell that I got these strange ideas that she was the herald of aliens/angels, who channeled encoded prophecies of the Apocalypse through her.

Sure. It's just that I'm not alone in this. Interesting how so many others are well-known directors, don't you think?

Anyhow, I've spoken of that life-changing mix tape I was given in the spring of 1986 so it's worth noting this was the first song on it. I remember exactly where I was when I first put the cassette on; I was in the bathroom of this very old house we were living in, about to get into the big old bathtub. I guess you could say it was a baptism.

How appropriate then that this YouTuber mixes in play from El Shaddai: Ascension of the Metatron to their fan video of the song. I should add this song has lost not one whit of its power for me. Here's the gist of it:

The story is inspired by the apocryphal Book of Enoch, and follows Enoch (Shin-ichiro Miki/Blake Ritson), a scribe seeking seven fallen angels to prevent a great flood from destroying mankind.[2] He is helped in his quest by Lucifel (Ryota Takeuchi/Jason Isaacs), a guardian angel in charge of the protection of the world who exists outside of the flow of time, alongside four Archangels: Michael (Kazuaki Yuguchi/Martin Glyn Murray), Gabriel (Atsuko Tanaka/Kirsty Mitchell), Raphael (Hirofumi Nojima/Adam Sopp) and Uriel (Hiroki Yasumoto/Chris Obi).

Obviously, I can't say for sure that otherworldly beings have ever seized control of a little group of on-the-spectrum musicians and used them as vessels for angelic communications, but if they did you're probably hearing it now.

Note that Metatron was known as the "Recording Angel."

Get ready, is all I'm saying.