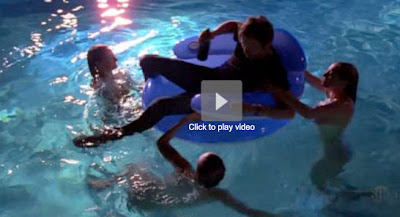 The Sirens, from last year's season finale
Exactly a year before the season premiere of Californication on Sunday, we looked at the extremely incongruous Sirius symbolism that was all over last season's finale. It was all part of an absolute orgy of Sirius and Merpeople symbols that was floating through the Memestream at the time.
I hadn't thought too much about it until I watched the new episode, and lo and behold the show was picking up right where it left off. What any of it is supposed to mean is beyond my reckoning, but it certainly is part of a much larger constellation of Sirius (and Atlantis) symbolism hiding beneath the surface in the entertainment media. Allegedly.

The recap clips included this shot of Hank and Karen, played by the radiant Natascha ("Christmas Day") McElhone or Solaris (read: "Sirius") fame. Karen is the diminutive of Katherine, establishing her as one of the Hollywood Hathors. Note the Blue Star looming in the background, which we here on the Secret Sun recognize as one of the epithets for Sirius.

Here we see the calm before the storm, when the scheming Mia (the show's Nephthys) invites Hank and Karen to a reading of the book she stole from Hank. Looking between then is the pentacle of Venus, which we see Karen crowned with here.

Now, I've been watching this show since the beginning and never caught that Mia published her book under an assumed last name, "Cross." Which is doubly interesting given Mia is the diminutive of "Maria." Triply, given that she stole Hank's story and sold it as her own. Calling Acharya S....

I guess it's redundant then to point out that Mia's agent/boyfriend is named "Paul."

Hank's reunion with Karen when he's released from jail (one of his many symbolic resurrections) is blocked by Marcie, his friend and agent's spunky bisexual wife. Continuing the Sirius symbolism (this scene takes place in Venice aka "Dogtown"), Hank calls her Karen's "watchdog."
Even more interesting, he calls her the "gatekeeper." Marcie is a he/she name, referring to the planet Mars.

Speaking of he/she's, Carla Gugino appears as Hank's new lawyer. Carla is another he/she name (literally- Carl means "man") and when we first see her she's dressed in distinctly masculine clothing.
Gugino has alien identity written all over her; she starred in the X-Files knockoff Threshold, as well as Race to Witch Mountain, another Sirius-fest.

Here's where I start to wonder if they're just screwing with us; after the meeting with the he/she, Hank and Charlie enter a building and descend a staircase from the ground floor...

... a visual which Secret Sun readers need no introduction to.

They end up in the lobby of the UTK agency, or "United Talent Kollective." No agency would use that spelling. The UT got me thinking of Utu, the Sumerian sun god, but I couldn't account for the K. Then again, reading it backwards you get "KTU," or K2.
So there you go. Either way, here Hank meets Sasha, the actress who'll be playing Mia in the adaptation of his book. We see a lot of her in this episode. Quite a lot. It almost makes up for all of the credulity that's strained to the breaking point when the 18 year-old starlet seduces the fifty-plus Hank. And you guessed it; Sasha is yet another he/she name.

And here we make sure that we understand that Sasha is yet another Hathor, identified with her Roman counterpart Venus.

Speaking of K, we see Charlie flash Hank an 11, which certainly fits with all of the relentless homoerotic joshing that acts as a humor substitute on TV these days. I'm open to any other interpretations as well.

Here's another interesting motif: an in flagrante Sasha reflected in a Sun mirror, which we also saw in I Am Legend...

...linked to that beautiful, amazing, wonderful dog who steals the film. What's the connection, you ask? Well, here we get a literal rendering of the Dog Star through visual juxtaposition.

And a few seconds later after that shot, we see Hank dreaming of returning home to Dogtown.

Here he dreams of Karen, who is helpfully wearing a Phoenix pendant around her neck.

The dream ends badly and Hank wakes in Sasha's apartment, under the Dog Sun mirror...

... which has yet another incongruous stairway. Not just any stairway, but one with the a spiral motif... 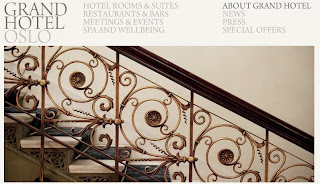 ... just like the one from Oslo, that led to the whole Stairway to Sirius last year in the first place. How about that? Quite a series of syncs, no?
So there are three possibilities here.

First, it's all just random bits of the Memestream. No meaning or significance at all. La la la.
Second, the producers of Californication are big Secret Sun fans. Possible? Sure. Likely? Can't quite say.
Third, I seem to have stumbled on a very strange series of symbols that are embedded into certain shows and films for reasons I can only guess at.

Maybe it's being driven by the Sirians themselves, who can say? Stranger things have happened. Allegedly.
Which explanation do you prefer?
at January 12, 2011