At their best, movies once offered us gnosis of a kind that the ancients could only write their weird apocalypses about.
It's part of a larger phenomenon- the most enthusiastic adopters of any new communication technology are people selling either religion or sex. Both offer an escape from the grinding boredom of life.
In the Middle Ages, the Church was the place you went to live that escape; where you heard the music and the legends and saw the great, luminous depictions of the superheroes of ancient Jewish mythology. The first motion picture dealt a mortal blow to that exclusive franchise that Darwin could only dream of. Each cinematic innovation-- sound, color, 3D, special effects -- was just another nail in the coffin. 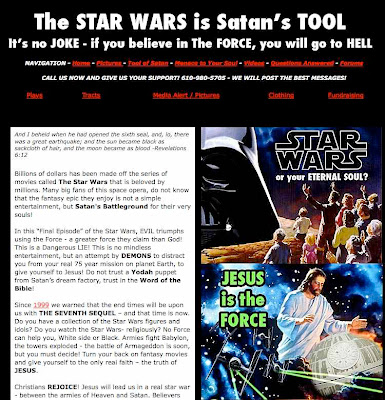 And then Star Wars came along and struck mortal terror into the hearts of religious profiteers. Why would a film preaching morality and self-sacrifice be such a threat? Because it offered an alternative cosmology- a panentheistic philosophy that drew heavily from Buddhism, Native American shamanism and as we've discussed, Carlos Casteneda.
As we see explained by Yoda, the Force is an entirely plausible vision of divinity- an essentially sentient energy that can be grasped, understood and utilized by the initiate. But it was a two-edged sword -- if you were greedy or hateful, the Dark Side would rise up and destroy your soul. Maybe that struck a bit too close to home with the film's critics.
The Force is elegant in its simplicity, and plausible in the extreme. You didn't need to buy into the sci-fi reality onscreen to understand the Force.
I often wonder if it was the Force that really sold Star Wars to the world. It was a one-two punch: dazzling visuals and action, undergirded by this powerful, simple philosophy of practical magic.
As we've seen, Lucas seemed to lose interest in the Force as a philosophy after Empire Strikes Back and used it as an all-purpose wireless power grid for the Jedi to use to shoot plasma beams from their fingertips. Since writing the previous post I actually tried watching the prequels, but couldn't make it through the first half of the first one.
I opted for a hilarious YouTube critique of Attack of the Clones, that brilliantly cataloged the utter chaos I was seeing onscreen. But the reviewer quite cannily compared Yoda's elegant soliloquy about the power of the Force with the crass, reductionist chatter about "midichlorians" from Phantom Menace.
I'm not going to pile on Lucas here. I understand him in a way. I think he's very much an example of the types I'm very well familiar from a life spent in Fandom. I understand the obsessiveness, the overwhelming need for control, the meticulous focus on meaningless trivia.
The irony here is that the early drafts of Star Wars: A New Hope were every bit as fractured, incoherent and overstuffed as the prequels, at least that's how the Lucas bio I recently read framed it. The difference then was that Lucas had to whip it into shape because he was writing on Fox's dime, and had people around him such as his ex-wife and ex-producer to tell him he was writing garbage and to go back and make sense of it.
The evolution of the Force is explained in an excellent article on Lucas and Gary Kurtz from Adherents.com. The synopsis included from the early drafts of the first film echoes the total narrative mayhem of the prequels:

In this version, the Force has two aspects: Bogan, the evil, and the good, Ashla (from C.S. Lewis's Aslan). Skywalker, apparently unburdened by the celibacy imposed in earlier versions, had twelve sons, to whom he passed this knowledge. They became the Jedi-Bendu, and 'brought peace and justice to the galaxy' -- by what means isn't specified.

All this ended in the Clone Wars when the Great Senate, in league with the Power and Transport Guilds, allowed knowledge of Bogon to fall into the hands of the Sith Knights, personal bodyguards to the emperor. The Sith hunted down the Jedi -- though not the father of Luke, Biggs and Windy, 'The Starkiller,' the search for whom begins a theme of the film. Once he finds them, Luke will give him the Kiber Crystal, which has the power to amplify the Ashla force a hundred times.

'Anybody who read those drafts,' recalls Kurtz, 'said, "What are you doing here? This is absolute gobbledegook."' He urged Lucas, who later defined his religion as 'Buddhist Methodist', to go for something simpler and more universal. 'Comparative Religion is one of the things I studied in university,' says Kurtz.

'I also studied the Buddhist and Hindu sects, and studied Zen and Tibetan Buddhism, and also Native American spirituality; shamanistic methods and so on. I got out a lot of my old books and we talked about it. If you trace back most religious thought to the teachings of the great prophets, whether Judeo-Christian, or Muslim, or even Hindu or Buddhist, you start to see a lot of similarities. The core philosophies are very very similar. The most obvious one is the Buddhist tradition about karma -- the karmic action that comes out of cause and effect. So the Force is an amalgamation of lots of different things. '

I saw Ben Kenobi as a shaman, really, rather than a character tied to any conventional religious background. The American Indians look upon God as the Great Mystery -- that's what they call him. [Their religion] is about the universal energy you can draw on through individual effort.

You draw on the energy of the Great Mystery in the dances and tribal prayers. [I thought] this would be a good way to connect with this, since it's simple enough that you don't have to go through weeks and weeks of explanation trying to get some sense of what the religious philosophy is. And it's true enough, in the sense that it's based logically on a real belief system.

The fact that all of the magic vanished from the franchise following Kurtz's firing after Empire certainly bolsters the arguments that he was the force behind the Force. The point here though is that the best fiction draws heavily on reality. So when you have a film so divorced from reality as Star Wars, the familiarity and plausibility of the Force becomes all the more alluring, because in a way it's the only part of the story that seems familiar to us.
It's a magical philosophy that doesn't rely on banishing spells and secret alphabets but on concentration, deepened perception, unlearning and radical intuition. It heightens latent human abilities rather than creating new ones, like the best of our own magical traditions.
UPDATE: Battlestar Galactica recreator Ron Moore has a new series about a magical police force. The name?
Why 17th Precinct, of course.
at January 20, 2011