In 100 years everyone will have forgotten the prequels and the sequels and the spinoffs and focus solely on the original Star Wars movie. Why? Because there's nothing said in anything that came after that wasn't said best in the first film.
Sure, Empire Strikes Back was fun and exciting, but suffers from its episodic nature and from following a story that is complete and finished in and of itself. I'll admit to being an extremely unbiased commenter- the original Star Wars came out shortly before my 11th birthday and blew the top of my head off. I pored over every scrap of information about the making of the film I could get my hands on (though I quickly lost interest in the comic as soon as the adaption was done).
I even planned the building of a Star Wars fan clubhouse on stilts, only to have a carpenter neighbor tell me my plans were not only ridiculous but extremely dangerous, to boot.
The point is that I consider myself to have been the exact right age to experience the film, even if I was too old to play with the toys (or at least thought I was at the time). It helped that I was already an obsessive sci-fi and comic book fan several years running. I don't remember if losing my virginity hit me as hard as Star Wars did, which probably goes to show that it didn't.
And of course, the first Star Wars- the real Star Wars- is about (and only about) magic. A magical battle, to be exact, between the white magic of the individual and the black magic of the state. Maybe even more subversively, the magic of the film is a profoundly pragmatic variety -- magic as a finely-tuned expression of our intuition.
Certainly not the fanciful spellcraft of the Harry Potter Universe. And the ideas about a pervasive Force that can be wielded by the magician are explained in the movie so explicitly as to approach panentheistic propaganda (as opposed to the pantheism charge usually leveled against the film), a concept which comes straight of the magical playbook.
It should be no surprise that all of this inspired a half-serious religion based on the Jedi. The Jedi are a sci-fi take on the Knights Templar, in fact they were called the "Jedi Templar" in an early treatment.
The sixth film, Revenge of the Sith, is a fairly cogent allegory of the fall of the Knights Templar, which serves to set everything up for the real Star Wars. This is borrowed heavily (along with a ton of other plot points) from another magical narrative, Frank Herbert's Dune.
Herbert used the House of Areides as his Templar stand-ins, and the repulsive Harkonnens as his Vatican stand-in. The Bene Gesserit were Herbert's sex-changed Jesuit stand-ins, which speaks to the gender fluidity which permeates both religion and science fiction.

But the Jesuits would probably prefer they not be seen as magicians, which the Bene Gesserit and Jedi most certainly are. And the Jedi are much less ambiguous in their allegiances than their Dune counterparts, which gives the first Star Wars its kick.
There's also a residue the strange confluence between the fall of the Templars and the Arthurian romances which rose to popularity soon after in the Merlin-Arthur relationship between Obi-Wan Kenobi and Luke Skywalker (originally Luke Starkiller, Son of the Suns).
There's a little of everything in Star Wars, actually, which accounts for its immense popularity. The secret to create a monster franchise is ripping everything off and recombining it all in a new way. And by that I mean, adding magic.
Roddenberry did it with Star Trek, Chris Carter did it with The X-Files, and George Lucas raided everything he could get his hands on for ideas. Going so far as to add a highly unlikely source for a Hollywood blockbuster, but one that Secret Sun readers are well-acquainted with.
Although I'd argue (along with many others) there's quite a bit of Alan Watts in Obi-Wan, there's also a lot of Carlos Castaneda as well. Aside from Flash Gordon and The New Gods and Joseph Campbell, Lucas lifted quite a bit of Don Juan (or Wan) for Obi-Wan. (There's a very interesting essay at a Star Wars site that digs into the influence, and that's where some of these quotes have been pulled from.)
This isn't speculation, it's all pretty well-documented. Like this:

"Lucas had by now simplified the mysticism in his script. Obi-Wan Kenobi would be a guardian of the wisdom of the Jedi knights and the force, a mysterious power "that binds the universe together". Lucas had found the inspiration for the idea in a story in Carlos Castaneda's Tales Of Power, in which a Mexican Indian mystic, Don Juan, described a "life force" (Empire Building, page 62).

And then there's this:

"The idea of using another person, perhaps an alien, for Luke to play off of came up during story meetings. George Lucas and Leigh Brackett thought that the alien could be an Indian desert type, very childlike even though he's an old man" (Annotated Screenplays, page 167) 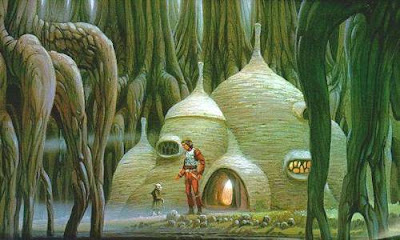 A lot of people love Yoda, but I see him as a badly-animated Obi-Wan reprise. Obviously not really anticipating a sequel, Lucas killed off Obi-Wan for dramatic effect and then had to scramble when Luke needed to be trained as a Jedi. It would have been immensely more dramatic had it been Obi-Wan, but there is one interesting factoid about Yoda that should be pointed out in this context:

Another idea, which did not make it on to screen, was to show Yoda " ... during the training ... always smoking from his gimer stick, a short little twig with three branches at the far end". (Annotated Screenplays, page 183). This may allude to the shaman's ingestion of psychotropic plants as an aid in their quest.

The writer goes against the grain of fan opinion and presents the loathesome Jar Jar Binks as a possible vegetation spirit, citing no less than RAW to bolster his argument.

Robert Anton Wilson recounts his own experiences of Mescalito in "Cosmic Trigger". He describes seeing "a man with warty green skin and pointy ears, dancing in a cornfield." He then tells of reading Castaneda's "The Teachings Of Don Juan" five years on from his experience, in turn realizing Castaneda's description of Mescalito as being exact with the figure he saw. He suggests that Mescalito may simply be an archetype of the collective unconscious, placing him in the same archetypal group as the Irish leprechaun or of Mr Spock from Star Trek (I believe that some writers tie extra-terrestrial experiences into this grouping also).

By proxy, the potent narrative magic of Carlos Castaneda had given Star Wars its own magic in turn. Or at least that would be my argument. Reading about the making of Star Wars is like reading a play-by-play description of a multi-car pileup on an interstate- the entire production was plagued from start to finish and yet somehow pulled together at the very last minute and changed the world forever.
That, my friends, is magic. That is what I'm trying to explain. Maybe without the explicit magic none of it would work at all. It's magic that defeats the Empire, a lesson we'd all do well to pay close attention to.
POSTSCRIPT: Like a lot of other people, I'd argue that the magic was gone from the Star Wars Universe after Empire, which may be explained by the firing of producer Gary Kurtz, who had a major influence on the creation of the franchise.
Sure enough, Kurtz is yet another Sci-Fi Mormon and has become something of a martyr to fans who feel betrayed by Lucas's stewardship of the franchise.
In an interview with The LA Times, Kurtz splashes ice water on Lucas' claims of a preordained epic:

For Kurtz, the popular notion that “Star Wars” was always planned as a multi-film epic is laughable. He says that he and Lucas, both USC film school grads who met through mutual friend Francis Ford Coppola in the late 1960s, first sought to do a simple adaptation of “Flash Gordon,” the comic-strip hero who had been featured in movie serials that both filmmakers found charming.

“We tried to buy the rights to ‘Flash Gordon’ from King Features but the deal would have been prohibitive,” Kurtz said. “They wanted too much money, too much control, so starting over and creating from scratch was the answer.”

Lucas came up with a sprawling treatment that pulled from “Flash Gordon,” Arthurian legend, “The Hidden Fortress” and other influences. The document would have required a five-hour film but there was a middle portion that could be carved out as a stand-alone movie. Kurtz championed the project in pitch meetings with studios and worked intensely on casting, scouting locations and finding a way to create a believable alien universe on a tight budget.

Kurtz went on to accuse Lucas exactly of what many fans have -- writing to facilitate merchandising. Kind of the story of Lucas' generation, in a strange, sad way.
UPDATE: Talk about Synchronicity! This posted today on NME.com: "George Lucas believes the world will end in 2012." Thanks to an eagle-eyed reader.