Although The Wicker Man is the best-known- and the best overall, I'd argue- it was only one example of an entire genre of British occult thrillers, many of which starred the estimable Christopher Lee.
Many of these films also featured thinly-veiled Aleister Crowley analogs, the best of these being 1957s Night of the Demon (based on the M.R. James short story, 'Casting the Runes'), which featured a brilliant performance by Niall MacGinnis as the malevolent manchild of a sorcerer, "Julian Carswell."

The genre wasn't limited to Britain- one of my favorite films of all time is Quinn Martin's (of Invaders fame) adaption of Fred Mustard Stewart's The Mephisto Waltz, which is not only an absolutely brilliant piece of writing on its own, but has the added bonus of a young and impossibly gorgeous Jacqueline Bisset in the lead role.

But more often than not, Hollywood lapses into stripmall Satanism of the Anton LaVey variety, rather than more nuanced and resonant black magic of the Crowley stripe (maybe Tinseltown execs are required to pay more explicit tribute to their Lord and Master, and have a quota to fill). The wretched abortion that resulted when they consumed the Hellblazer franchise and then shat out Constantine is just one painful example of this dumbing-down tendency.

After seeing Neil LaBute kick The Wicker Man to death and piss on its corpse, I shudder to think what they'd do with Crimson Cult aka Curse of the Crimson Altar. This sparkler of a Swinging Sixties scarefest not only features Christopher Lee warming up for his Lord Summerisle role, but throws in Boris Karloff to sweeten the deal.
Of course, there's also plenty of nubile British flesh dancing around to the kind of corny, movie soundtrack pseudo-rock that no Mod or hippie of the time would be caught dead in earshot of.

The story is as muddled and confusing as any Hammer horror. Mark Eden (looking eerily like a refugee from an early period Guy Ritchie film) plays an antique dealer who goes looking for his brother, who was last heard from in some provincial backwater.
Eden then discovers all kinds of Dionysian debauchery and carrying on and makes the classic old horror movie mistake- he accepts the lodging invitation of the creepy lord of the manor (Lee). Things go predictably awry from there. 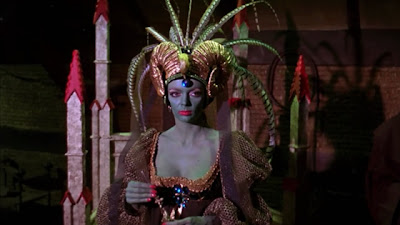 But what fascinates me about this film (aside from the obvious) is the incongruous parallels to UFOlogy. I'm sure they'd go over the heads of nearly everyone who sees the film, but in several points in the film characters are transported into a netherworld which bears not only a startling similarity to the more compelling "abduction" narratives I've read (and more specifically, my interpretation thereof), but also to their ancient forerunners in the Mysteries.
Drugs seem to be the common denominator, but as we see in the final shot nothing is as it seems. 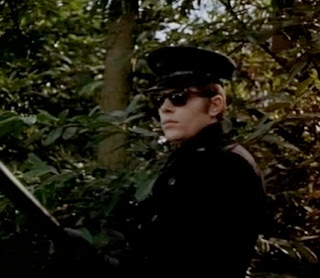 There are also the strange incongruities of Livinia having green skin (more appropriate to an alien than a Druidess) and her throne looking as if it's made of three-stage Saturn rocket models.
Just to make things even more tantalizing, one of the characters is menaced by a classic MIB type (pale skin, black clothes/dark glasses, mute) following one of his abduction experiences. I won't give it away but underneath all the drama is a classic Walk-in subplot as well.

Heady stuff, though I'm sure it all went under the radar of anyone who isn't as obsessed with this stuff as myself.

But perhaps the screenwriter here will give us a few clues- it's none other than Henry Lincoln. Yes, that Henry Lincoln of Holy Blood, Holy Grail fame. What a lot of people don't realize is that aside from being one of the authors of the most lucrative occult conspiracy theory in publishing history (albeit when hijacked by Dan Brown), Lincoln was also a very successful actor and screenwriter.

Lincoln's CV includes a stint for the Doctor Who franchise (Lincoln created the Lethbridge-Stewart character) , and he's credited with three Troughton-era serials (17 episodes in all), two of which were Bigfoot/Yeti-themed and one of which was an alien-invasion potboiler.

It should be pointed out that the original Doctor Who pilot episode was essentially an abduction narrative as well.

POSTSCRIPT: This writer (and others) argues that the film is a loose adaptation of Lovecraft's 'Dreams in the Witch House'. It's so loose I didn't see it myself (there's no Brown Jenkin in sight) but it certainly adds another log to our bonfire...

UPDATE: Mike Clelland spent time with the film and offers up these scintillating bullet points. It seems there's enough to make a fair assessment that there are two stories being told here- one for the rubes and another for those in the know. Remember that this was made in 1968, when abduction reports were still being classified and the Betty and Barney Hill story was still a novelty.


~ Our protagonist, Richard Manning, said: "I had the strangest dream... It was so real, like it was really happening... It was like no other dream I've ever had..." This is exactly how almost every UFO abductee will describe their own experiences.

~ Lying naked on a table and unable to move is well established.

~ Waking up in an unknown place, with no idea how you got there.

~ Finding scars or marks on your body after waking with no idea how they got there.

~ I found it curious that the protagonist was put in the "GRAY" room.

~ Our protagonist saw a man with antlers. It very commonly reported that people will see a deer, and it will seem out of place, this turns out to be a screen memory.

~ UFO reports (as well as other paranormal events) are reported along ley lines and near ancient ritual sites. The village and the ritual reenactments of the witch burning seem to fit.

~ Curiously, fear of closet doors shows up in the research. The gray aliens are noted to emerge from this door as if it were a portal. (The movie MONSTERS INC. comes to mind). Or, the aliens will simple emerge through the bedroom wall. The secret door in the home certainly seem to parallel this concept of a portal.

~ The use of hypnosis is ever present in UFO abduction research.

~ There is certainly a focus on family lineage within the abduction phenomenon.

~ There is weird sex involved in UFO abduction reports.

~ Gaelic or Celtic ancestry is noted as statistically higher in the UFO abduction lore.