On Monday, we looked at the icon of the heavenly phallic beam of light and the pubis/pyramid in relation to science fiction movie posters. We have some more of those on tap, but let's try to further decode this enigmatic icon.
If you haven't yet, please read that article as it contains important background material for today's adventure. The Big Kahuna of ancient astronaut theory is a good place to start making our way back to the real world.
The placement is a bit off with the pyramids here, but we see the phallic rocket and the womb-like spacecraft just below it, indicating a technical kind of insemination. This is essentially the same symbolism as the obelisk and the dome.

Here's an explicit rendering of the meaning of the beam from Heaven for the film we watched a few weeks back- that being the insemination of alien intelligence into human DNA. The godlike fingers are zapping the bland-faced fellow's brains with their extraterrestrial mojo. It may be lousy graphic design, but it's more than serviceable symbology.

Slowly easing into the real world we see the beam from Heaven and the pyramid represented in Las Vegas at the Luxor Hotel, home of the post-human androgyne, Carrot Top. Some might argue that the beam is actually emanating from the top of the Luxor, but it's safe to say that's a bit more cost effective than sending down a beam from space.
To the best of my knowledge, this icon of the pyramid and the beam is a modern one. And in my interpretation, it's speaking to an extraterrestrial intervention that helped humankind evolve from building mud huts to building the Great Pyramid, all in the blink of an eye in the context of human history.
OK, that's still in the show business realm, right? Where do we find a truly remarkable depiction of this icon?
Why, at Rockefeller Center, of course. 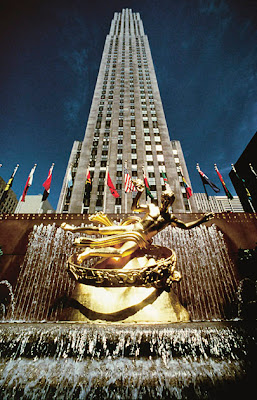 This depiction, however, is different in that we see the conception and the nativity simultaneously. "Prometheus" emerges from the top of the triangular rock formation, at the same point where the beam was received. We see the heavenly shaft/beam represented by 30 Rock, and the seminal fluid represented by the waters of the fountain. But why do we see "Prometheus" there and what does he have to do with any of this?
First of all, if that's Prometheus, then I'm Homer Simpson. That is Mithras. The Zodiac has no significance in the Prometheus legends, but is intimately associated with Mithras, and the Rock represents his birthplace. The flame is that of the Sun, hence the golden color. The flame is directly above the goat of Capricorn, which represents Mithras' birthday. He's also very young and handsome, which the old Titan Prometheus was not usually depicted as being.

Here are some images from Antiquity that show Mithras being born from a rock. In one we see him holding a torch. The "Prometheus" statue fits in quite well with these icons.
And as we've discussed before, lording above Mithras at 30 Rock is the supreme deity of the Masonic worldview...

...the Great Architect of the Universe in the flesh, right over the doorway to 30 Rock. It can't possibly get more explicit than this. Note the pyramid form created by the compass and eight pointed stars. Here we have the apotheosis of Masonic Manhattan. The Architect standing above Mithras here also reminds us that Ahura Mazda was the father of Mithras.
And how was Ahura Mazda usually depicted? 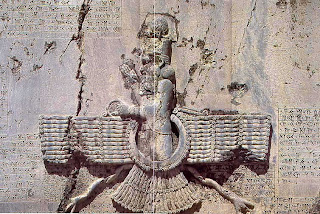 As a man in a flying disk. Or saucer, if you prefer.
So what are we looking at here? My interpretation is pretty straight-forward.

• As we saw with Stargate and other films, the heavenly inseminating shaft symbol carries not biological life but higher intelligence, specifically technological intelligence brought to Earth and inserted through genetic manipulation into human DNA. The pyramid or dome represent Mother Earth and its idiot children, meaning us.
• At Rockefeller Center, the insemination has led to conception which has led to inception. Mithras represents our sun, so the heavenly shaft is obviously not coming from Sol. It's coming from deep space to our Solar System, which you see represented in that wonderful photo.
•The placement of the GAOTU inside the Heavenly Shaft demonstrates that what came from the Heavens was alien intelligence, which the frieze refers to as Knowledge (Gnosis) and Wisdom (Sophia).

Is this what the Gnostics knew? I've always had trouble with the whole idea of Gnosis, in that it always seems to boil down to a question of faith. Were there sects who had real, tangible knowledge of the origins of human intelligence? It's a question that we'll be pondering in the weeks and months to come on The Secret Sun.

Downtown from the Rock, we see the heavenly beam twinned at Ground Zero, next to the pyramidical tower of the WFC (which we'll be looking at in much greater detail in the near future). Now, I know a lot of people see 9/11 as America's Reichstag Fire, but the events of the past seven years show that it was actually America's Pink Slip, with the core of the financial system rapidly moving to the new "world trade centers"... 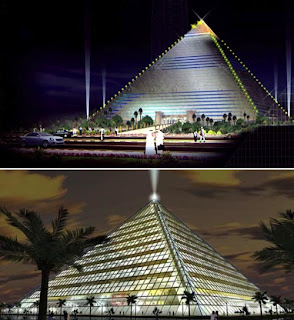 ... like the straight-out-of-science-fiction metropolis of Dubai, which makes Lower Manhattan look like Kabul after the Soviets left. This is the planned Dubai Pyramid, which surprise of all surprises, features the inseminating beam at the top. What an astonishing coincidence. I'm sure there's no connection to the Stargate or anything crazy like that.
No way. Not in Falcon City, Dubai.
at May 07, 2008