Does Anyone Remember the Future? 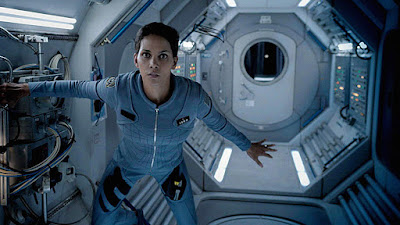 I've begun watching Extant, the CBS Halle Berry vehicle on Amazon Prime. Like The Whispers, it's another of Steven Spielberg's attempts to conquer TV (television was in fact Spielberg's first love, not movies), and also like The Whispers, yet another example of his alien obsession.

His obsession seems to have gotten a lot more sophisticated since War of the Worlds, and seems to deal more with forces that seem more akin to Poltergeist than E.T.. It's not the greatest science fiction I've ever seen, though it's keeping my attention far more effectively than most TV shows seem to be able to these days. And it is a fairly typical example of what's going on in the genre.

A lot of science fiction seems to have taken upon itself to be what Bruce Rux described Star Trek: The Next Generation as, a reincarnation of Soviet Socialist Theater from the Stalinist era. Drama is secondary to the inculcation of correct thought, in this case, adherence to the totalizing, reductionist scientistic agenda.

In Extant's case, people who believe in things like the immortality of the soul are ridiculed as "idiots" and parents who worry about their kids going to school with an experimental robot are painted as knuckle-dragging yokels.

I'm still early into the series so I can't yet tell whether this is just a setup for Scientistic orthodoxy being subverted (a distinct possibility in a show about aliens). But it rankles nonetheless.

But that's not what bothers me about this show. There's a deeper issue here, one that undergirds the crisis within our science and technology and by default, our science fiction.

Even if the series is fairly entertaining, what I am struck by is how derivative Extant is. So far what I'm seeing is essentially a simple recombination of A.I., Solaris and The X-Files (the latter not surprising given that former X-Files staffer Greg Walker is an executive producer).
In fact, the pilot episode rather blatantly lifted a scene from the X-Files episode 'The Calusari', so blatantly I was left wondering if it was tribute or just simple plagiarism. 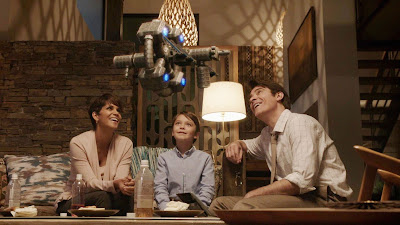 But the major impression I'm left with is how dated the show's futurism is, how it merely lifts the gizmos and gimcracks from Minority Report, A.I. and Solaris and to a certain extent from William Gibson's Bridge Trilogy.

What's wrong with that, you may ask? Well, think about it: those stories are all fifteen to twenty years old now and we're no closer to seeing their prophecies come to fruition than we were then (well, the poverty and inequality of the Bridge Trilogy are certainly here, most certainly in California, the most economically unjust state in the Union).

That you can transpose futurism from two decades ago to 2015 points to a serious problem in the presumed inevitable March of Progress™.

Things may be getting faster and smaller but we're still talking about technological concepts that are decades old now. And forget those gee-whiz headlines, we're nowhere near- I mean not even close- to the kind of Haley Joel Osment androids you see in Extant.
Even the space exploration in Extant is downscaled- routine LEO stuff, "astronauts" futzing around on space stations. So in that regard, we're not even near Solaris' jaunts to distant star systems.

There are a variety of little details, animated photographs and talking toasters and that sort of thing, in Extant meant to embellish its vision of a Tomorrowland. But at its heart it's no different than the futuristic worlds presented as a sop to depressed populations since the 1890s.
Even with the X-File-ready secret jostling, Extant's future is clean and orderly and harmonious, absolutely nothing like the future that seems to be taking shape outside your door today.

Does anyone buy that?

I'm watching Extant because I want to see where the alien storyline is going. The futurism isn't only a distraction, it's kind of an irritant. And the materialist/atheist brainwash certainly doesn't help either. But the futurism? It just makes me feel kind of wistful. Younger people may not even process it but certainly in the late 80s and early 90s some of us were foolish enough to believe technology might actually be liberating.

For most of us now, the Future® is a gated community and we don't have a passcard. And even the kind of future we assumed 15 years ago would be here by now seems farther away than ever.