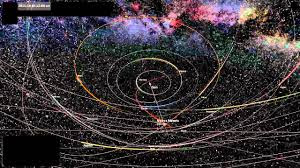 Back in July I posted this bit of speculation on the New Horizons mission:

For my part I can't help but wonder if the Pluto dog and pony show isn't a distraction.

This is nothing but the vaguest hunch but I can't help but wonder if this is just a fly-by for the media and the real target of this mission lies in the space beyond.

We're starting to hear serious people talk about Planet X again, even in the context of there being a Planet X and a brown dwarf.

Search for Potential 'Planet X' Far From Over

The hunt for the hypothetical "Planet X" has been fruitless so far, but that doesn't mean astronomers are calling it off.

A new analysis of data collected by NASA's Wide-Field Infrared Survey Explorer (WISE) spacecraft revealed no sign of the mysterious Planet X hypothesized to exist in the outer solar system. But scientists are keeping up the search for a planet or dim star far from the sun.

That this is being published at all indicates that there's more than speculation going on behind closed doors. And if in fact these objects do have idiosyncratic orbits and periodically enter the outskirts of our cosmic neighborhood, that would make a lot of people very nervous.

Even though I was careful to couch my speculation with qualifiers still I was labeled a "conspiracy theorist," and found myself on the receiving end of a curious amount of mainstream media attention, including an inquiry from Newsweek that I passed onto Richard C. Hoagland.

And now this from Newsweek's former owner and government mouthpiece The Washington Post, continuing the incremental process of Planet X disclosure- "Is there a Planet X, a ‘massive perturber,’ hidden beyond Pluto?":


Astronomers so far have detected about 1,500 icy bodies in the Kuiper Belt, according to Scott Sheppard, an astronomer with the Carnegie Institution of Washington. A few of them are big enough to rank as "dwarf planets." And there may be something much bigger lurking out there in the dark, says Sheppard. There are tantalizing hints of a hidden planet that's bigger than Pluto, perhaps even bigger than the Earth -- potentially Neptune-sized.

“I think there are definitely things out there bigger than Pluto that are yet to be discovered,” Sheppard told us.

After briefly explaining the mechanics of orbital perturburance, the article answers the two most pressing questions on the layperson's mind:


So then, how would such a big planet get way out there? Brown hypothesizes that, long ago, the planet formed closer to the sun, and might have been the core of what would have become a giant planet like Jupiter or Saturn. But then it could have been ejected toward the outer solar system through gravitational interactions with other giant planets.

If this Planet X is out there, why can't we see it directly? Because it's very far away and commensurately faint. It could be at least 200 Astronomical Units from the sun -- meaning 200 times farther from the sun than is the Earth. These hypothetical planets, dwarf or otherwise, don't generate their own light, and can only be seen through the feeble reflected light of the sun.

Sheppard notes that much of the sky hasn't been searched with extremely sensitive instruments capable of finding such a world.

“We have not covered the whole sky to the faint depths needed to find distant planets,” Sheppard said.

Remember now, just using 'Planet' and 'X' in the same question is supposed put you in the crank file and here we see the Establishment's house organ offering us a primer on it?
Planet X is like UFOs, a topic a lot of conspiracy theorists dismiss as scifi stuff, not to be taken seriously. But what if it's (or they are) more serious than you think? What if it/they might be an answer to a lot of questions we can't explain, questions that on the face of it don't at all seem related?