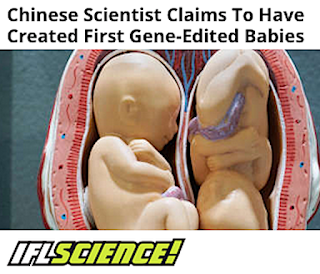 If the reports are to be believed, a Chinese scientist created the first gene-edited babies and of course they're Twins. Twin girls, to be precise.

The only people caught off guard by all this are those poor, benighted souls who don't read The Secret Sun. I'm thinking of starting a GoFundMe for them. 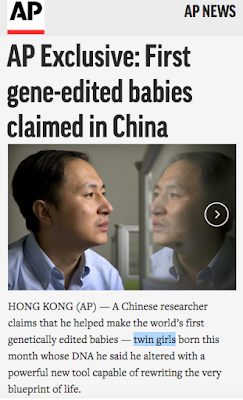 I rewatched way too many X-Files episodes way too many times to find any comfort in any of this. Whether you believe in intelligent design or Darwinian evolution, I'm sure you won't either.

It took how many years and how many supercomputers to sequence the human genome? And now random Joes think they can come along and start cutting and pasting, willy-nilly? Yeah, that will end well. 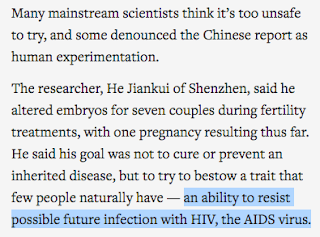 Of course, the usual shuck with these grifts is that it's all for therapeutic reasons, to cure some disease or other. Only later we found the boot sinking that much deeper into our throats.

But tell us, Random Science Guy, how did you code for these immunities? How many experiments did you perform to ensure that these new genes will actually work, never mind aren't going to create havoc in the larger genepool?

I mean, did you even watch I Am Legend? 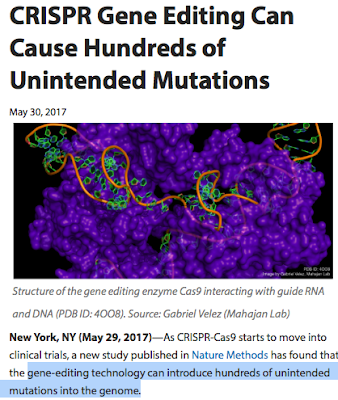 But then again, maybe introducing hundreds of unintended mutations is the idea. Or should that read "unintended?"

You know how it works; a bunch of very highly-trained experts spend a lot of time and money working on something and then when it all rains shit on the plebes' heads, they start with the "unintended consequences" ragtime dance.

Then laughter ensues all the way to the ATM in the lobby of the massive underground base. 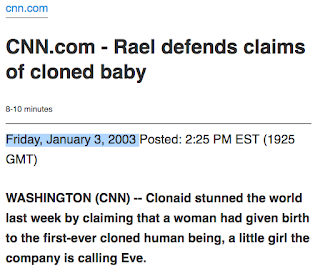 Or is this all simply the first act in a play that's been in pre-production for a very, very long time? The Rael UFO cult claimed 15 years ago that they'd begun cloning humans and everyone had a good chuckle.

But maybe this stunt was some kind of limited hangout. Everyone knows that a lot of these cults-- particularly the ones with a lot of money-- are/were intelligence fronts. So were Rael simply tasked to float a trial balloon for a much larger and much longer-established program? 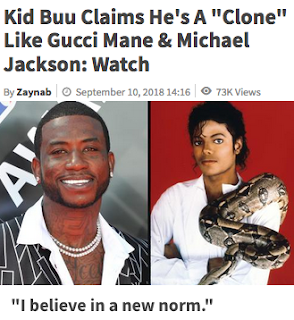 If so, what do we make of all this?

Well, I'm not sure who or why, but it looks like someone's going after the Cylons with hammer and tongs. The so-called FAANG stocks--Facebook, Apple, Amazon, Netflix and Google-- are getting slaughtered on Wall Street, losing more than one-trillion dollars worth of market capitalization.
Given how insanely and invasively totalitarian all these companies have become, I don't know if that's good or bad for us. I'm sure Antifa's Satanmass bonus checks will be a lot smaller this year, but there's still not enough data to adjudge how this will effect Joe and Jane Q. Lunchbox.
Crypto is also getting pummeled, as I expected all along. I can't say if it will ever recover but I hope none of you fine folks out there bought high. 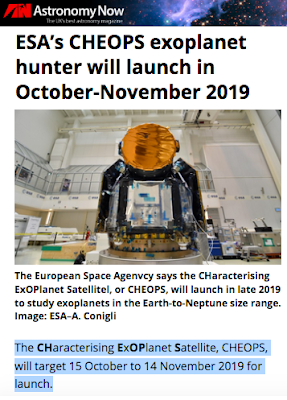 I guess ESA thought OSIRIS-REX wasn't a tortured-enough acronym so they decided to outdo NASA with something even more ridiculous. 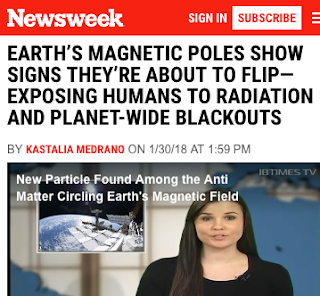 Given the inferences that can be drawn from its lyrics (and the cover art of bright red bursts in a field of ice), I can't help but wonder if the title for Head Over Heels might be an encoded reference to a coming pole-shift.

After all, we are told that the Earth "will toss and tumble" and the Heavens will "curtsy and bow" and "it" will be "halved in half" by "wheezing and sneezing."

I'm sorry if anyone out there got in the wrong line. This is the queue for the "It Never Ends" counter. Please wait for your number to be called.

POTSCRIPT: Bernardo Bertolucci died today. He's best known for commissioning "Alice" for his 1996 film Stealing Beauty. That, and Last Tango in Paris. Plus, The Last Emperor. Maybe a couple other things here and there.