Telling Tales Out of School: Hiding in the Light 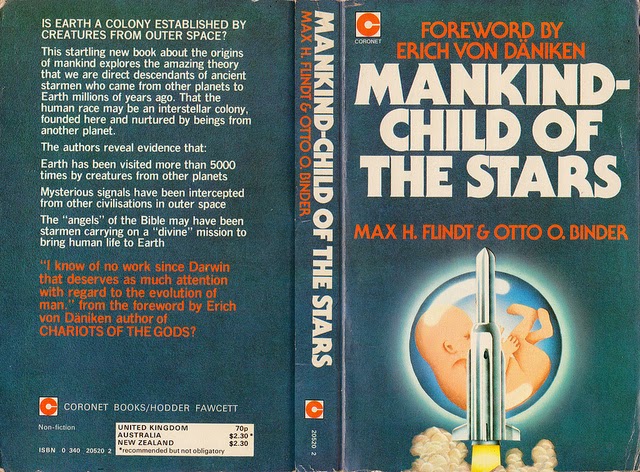 One of the more fascinating figures of the collision of 20th Century pop culture and future-science is Otto Binder.
The prolific writer was not only one of the most influential writers in the history of the comics medium he was also a forward thinker on the topic of rocketry and space, creating one of the first- if not the first- magazines dedicated to the space program, Space World.

From a previous Telling Tales Out of School post:

(Binder) authored over 300 non-fiction articles on scientific and UFO subjects, and articles in science yearbooks on chemistry, astronomy, physics and biology. He was a member of the American Rocket Society, American Interplanetary Society, National Spaceflight Association and Aerospace Writers Association.

He was also founder and editor of Space World Magazine from 1959 til 1963, subscribed to by high school and university students, as well as professional people....

In 1963 he was awarded an honorary Master’s Degree in Astronautical Science by NASA, and from 1965, until his death in 1974 wrote extensively in the field of Ufology, with books and articles on analyses and statistics. 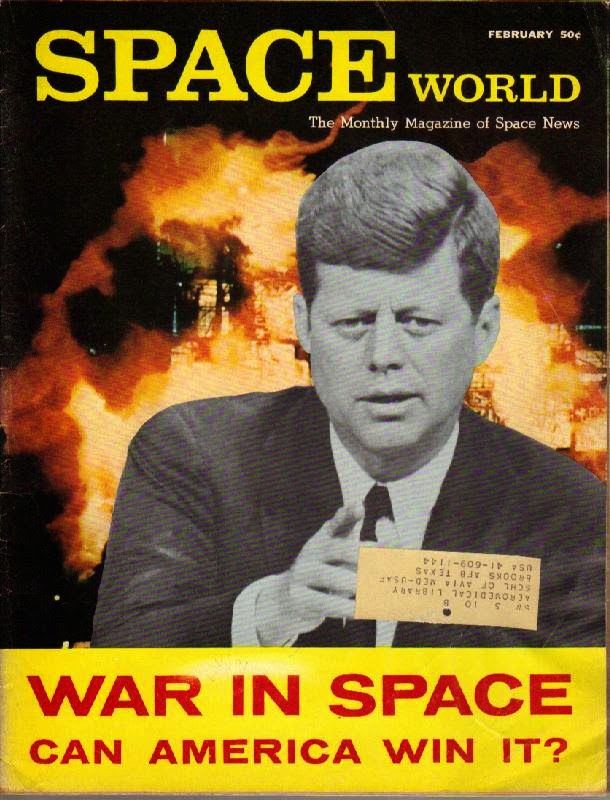 Binder was not only a pioneer in space journalism, he was also a pioneer in UFO and ancient astronaut journalism as well, which was a shocking career move for someone so ensconced in the circles Binder ran in. 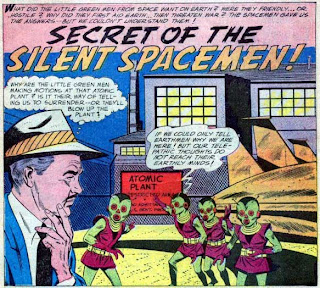 One topic Binder seemed especially interested in was the undue attention that UFOs had been paying nuclear installations and weapons programs, but he seemed to tell these stories in bizarre, allegorical comic book tales, like the extremely enigmatic "Secret of the Silent Spacemen" in Strange Adventures #82.

That story was so strange it could only have had some kind of symbolic counter-narrative, but its plot-- aliens interfering with atomic energy plants-- was apparently a topic of grave concern in military and intelligence circles going back to the 1940s according to some researchers, with some sources blaming the Great Blackout of 1965 on UFOs. 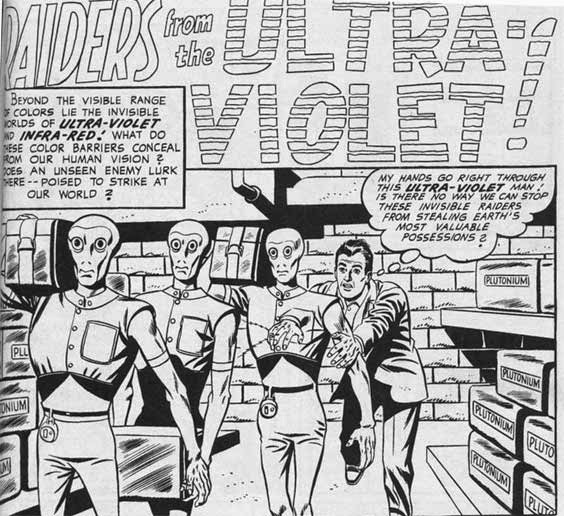 So this is why another Binder Strange Adventures story caught my attention. I found it in a Showcase collection I got at a local used book store but unfortunately haven't been able to find color scans of the story. In this story a science discovers aliens (who look remarkably like the "Tall Greys," which is unusual given the bizarre variety of depictions of aliens in these old comics) who exist (or cloak themselves, depending on what exactly Binder is getting at here) in the ultraviolet spectrum.

It all begins with the failure of an atomic bomb test, which leads to the discovery that all of the military's plutonium is missing. This brings us back to the same situation that Binder was allegorizing in "Secret." 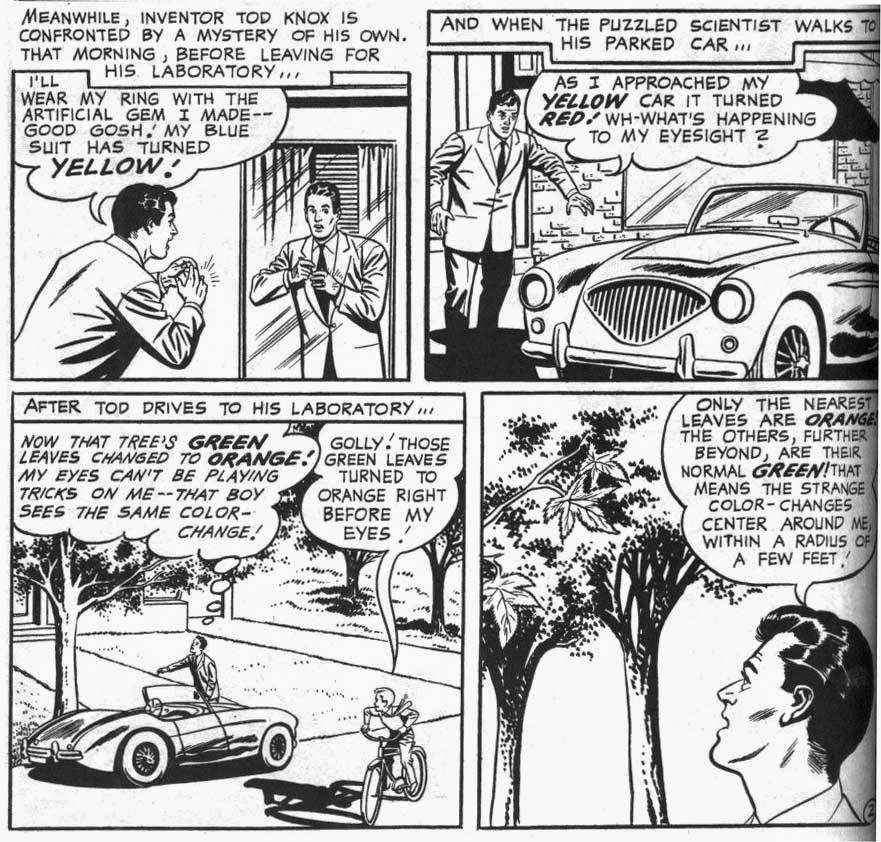 Then things get kind of weird.

Scientist Tod Knox has some magic ri... sorry, some science ring, that changes all the colors he sees. Which is why I'm really sorry I don't have color scans here. What exactly Binder is driving at is unclear, but I have a feeling it has nothing to do with a super-ring.

That bicycle might be a little hint, what do you guys think? This story was published in 1956, right about the time MK ULTRA was dosing people left and right. 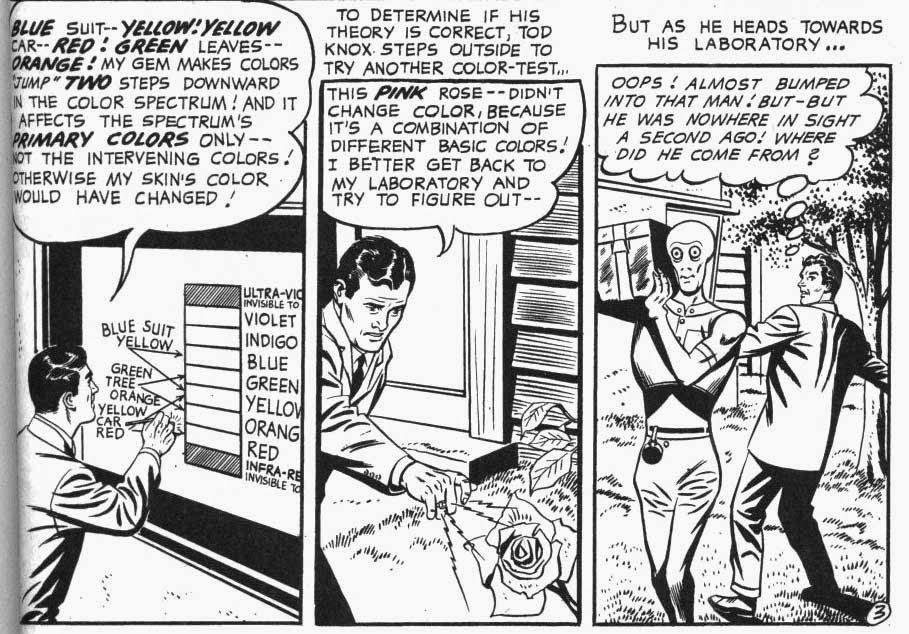 Being the square-jawed 50s science guy he is, Tod returns to the lab and sciences everything out with a chart of the electromagnetic spectrum of light. Taking another megadose putting his science-ring back on, Todd runs around, tasting the sound of purple until he bumps into a machine elf Ultraviolet Alien, who he at first mistakes for a working joe.

Following the alien to the atomic warehouse, Tod discovers the Tall Greys are stealing the plutonium. Using his science-ring thingy, he sees that their ship in cloaked right in the middle of a city street. Then a bunch of other stuff happens and the aliens magically go to another dimension, in this case all the way to the invisible infrared. Hey, it's a backup story-- what are you expecting? 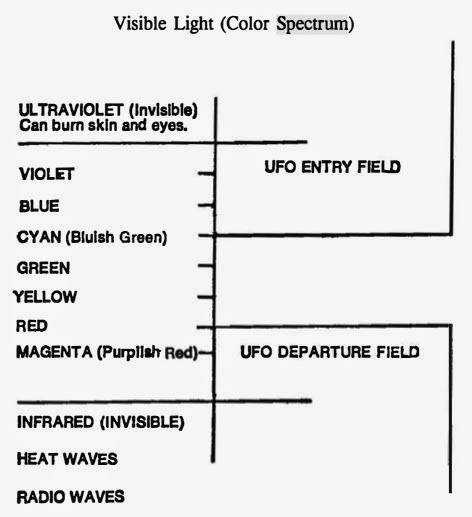 But the story itself isn't what interests me. It was published in 1956 in a sci-fi anthology that probably didn't sell all that well (SF was always a hard sell in comics). What does interest me is its author and his credentials, not to mention his interest in UFOlogy.

What also interests me is that the idea seems to have made an indelible impression on John Keel, because 13 years later Keel would publish very similar theories as to UFOs and the ultraviolet spectrum of light, beginning in Operation Trojan Horse and continuing in several other books such as The Eighth Tower.

Ultraviolet rays come next, and they are tremendously important to the UFO phenomenon. These are also invisible but can burn the flesh and the eyes. A neglected part of the UFO evidence consists of the hundreds of sightings in which the witnesses suffered all of the symptoms of klieg conjunctivitis afterward. Actors performing on movie sets brightly illumi­nated by arc lights sometimes experience these same symptoms. The eyes redden, itch and feel sore. This is caused by the ultraviolet radiation (also called actinic rays).

Keel and Binder were friends and sometime collaborators. But they had very different opinions on UFOs, with Binder being more a nuts-n-bolts guy and Keel being, well, John Keel.

After much more experimentation, on other nights in other places, I concluded that the purple spots were part of the UFO phenomenon and were being controlled by, or possessed, some kind of intelligence.

Return now to our two charts of the electromagnetic and color spectrums. You will see that ultraviolet rays immediately precede the visible spectrum. The first visible frequencies are of purple or violet light.

Let us assume that UFOs exist at frequencies beyond visible light but that they can adjust their frequency and descend the electromagnetic spectrum just as you can tum the dial of your radio and move a variable condenser up and down the scale of radio frequencies.

When a UFO's frequency nears that of visible light, it would first appear as a purplish blob of violet. As it moves farther down the scale, it would seem to change to blue, and then to cyan (bluish green). In our chapter on meteors we note that they most often appear as bluish-green objects.

I have therefore classified that section of the color spectrum as the UFO entry field. 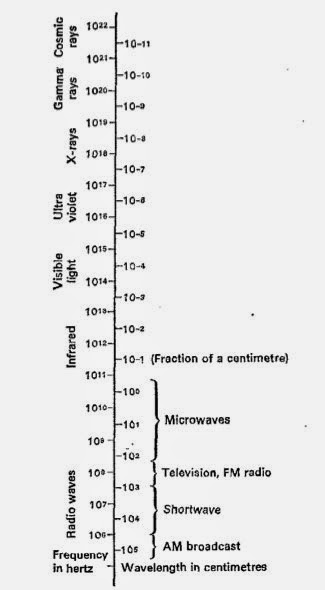 Keel again, from The Eighth Tower:

Visible light follows infrared. Dr Meade Layne and other early UFO investigators observed that the objects often appeared magically as a reddish puddle in the sky, then progressively changed to the other colors of the spectrum until they became a sickening purple and melted into the invisible ultraviolet.

'Forbidden' books on black magic, witchcraft, and ancient religious beliefs all describe this basic materialization process, including solemn warnings to avert the eyes when you materialize an angel or demon through some secret rite lest you suffer from conjunctivitis and the other painful maladies produced by the rays of the EM spectrum. All mythology tells how one should not gaze upon the countenance of a materialized god.

Keel obviously took a very metaphysical view of all of this. But what if the effects he describes were of a technology, a cloaking technology? Perhaps an extremely exotic and impossibly futuristic technology, maybe one so advanced we might not recognize it as a technology. Scientists are openly toying with the concept now, but one wonders the icy stabs of terror military planners in the late 40s and 50s must have experienced when pondering the existence of such a technology in the hands of the 'Saucer Men'.

One thing is for sure; if anyone outside of those circles got wind of such a technology, it was Otto Binder.