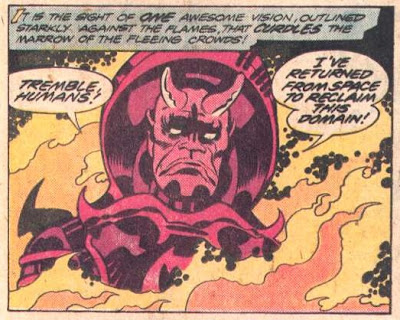 One thing I had failed to realize about The Eternals was that Kirby's depiction of the Deviant invasion of Manhattan wasn't quite the exercise in 50s nostalgia I had originally taken it for.
In fact there are interesting to parallels to one of the most popular posts in the history of this blog, the interview with Nick Redfern concerning his book, Final Events, dealing with efforts of the real-life secret society within the Pentagon called the Collins Elite to portray the postwar UFO wave as the work of demons.
The Elite's propaganda war was wildly successful and continues to bear fruit today. However, their ultimate goal of usurping the Constitution and establishing an Old Testament-styled theocracy was unsuccessful, so far at least.

As discussed before, Kirby saw humanity accompanied by two races of elusive companions: the Eternals (the Nordics of UFO lore, roughly), who lived on distant mountaintops waiting for the time in which they would act as servants of the space gods known as the Celestials (roughly analogous to Lloyd Pye's "Terraformers") and the Deviants, the Reptilian former masters of Earth whose home of Lemuria was sent beneath the Pacific Ocean when they defied the will of the Celestials.
The Third Host of the Celestials ended the Deviant rule over humanity and since that time only fleeting contacts have been made between humanity and its cousins. These contacts were ultimately passed down in folklore as encounters with fairies, gods, demons, angels, gremlins, and other such supernatural creatures.
The tyrannical rule of the Deviants remains locked in human memory, and the shapeshifting, reptilian Deviants continue to haunt the dreams of humanity in the form of devils and demons.

The Deviants are ruled by Tode (almost certainly based on Kirby's old DC nemesis Mort Weisinger, famously described as a "malevolent toad") and their forces are led by Anton LaVey lookalike General Kro (who rivals the Eternals for longevity, and is presented as the inspiration for the biblical Satan).
After failing to prevent the Eternals from lighting the Cosmic Beacon that will guide the Celestials to Earth, Kro(wley?) then devises a strategy straight out of the Collins Elite playbook. 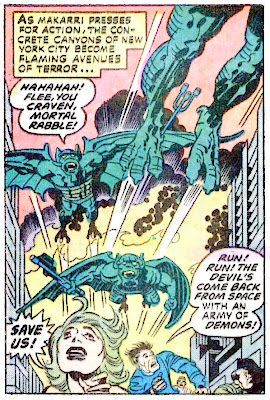 Realizing that the entire world is terrified of the looming Celestial motherships, Kro stages the ultimate false flag invasion. Using his shapeshifting skills, Kro grows himself an enviable set of horns and assembles a Deviant squad of USOs (posing as spaceships, mind you) and stages his own 9/11 writ large.
His plan is that the nations of the earth will see the Celestial motherships -- and hopefully the Eternal strongholds -- as the source of the space-demon invasion and launch their nuclear arsenals at the Celestials. If nothing else, the resulting fallout will do away with those pesky humans for good. 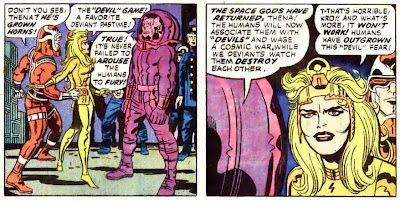 The whole scenario also recalls another Secret Sun greatest hit- the Project Blue Beam debunking. Was The Eternals another source for whomever was feeding disinfo to Monast? Doubtful.
One thing I did find interesting however was that the Eternals' Unimind ritual-- described as just that, a ritual-- was centered on a blue beam.
Coincidence? Well, only so much as it coincides with all of the rest of this madness. 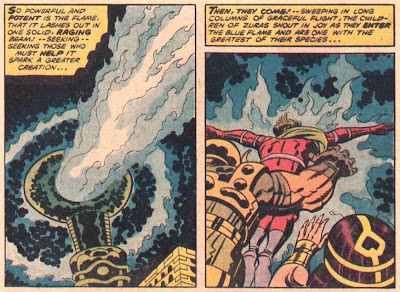 Man, I really wonder where Kirby would have taken this book had not it all collapsed around him after the "Astronauts" mindblower...