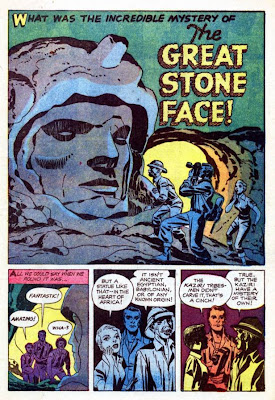 We looked at Jack Kirby several times in the past here, most notably in his startlingly accurate yet allegorical predictions of the Face on Mars in 1959, 9/11 in 1984, and the Gulf War and Iraq War in 1974 and 1975.
There's also a foreshadowing of the plot of 2001: A Space Odyssey, possible Apollo mission footage chicanery, and the suppressed discovery of obelisks on the Moon by American and Russian surveying missions in the mid-60s.
In ancient times, prophecy was used as an acid test, proof that a prophet or priest was in fact in touch with a god. In the Bible, the punishment for a false prophet was death. If a prophecy came true then the prophet or priest (or priestess, certainly) would be trusted to supply information pertaining to theology, morality, cosmology and so on.
Here's what we know-- when Kirby (born Jacob Kurtzberg) was young, he was struck down with scarlet fever. His parents were poor immigrants from Austria and antibiotics were not widely available. As young Jacob lay dying, a group of Kabblalist rabbis were called in to exorcise the demons that were killing the boy. Whether through mystical agency or through Kirby's inborn toughness, he survived.
After making his name in the comics field, Kirby was drafted into the Army. His friends were lucky or connected enough to get jobs stateside or working for the Armed Forces newspapers or whatever, but Kirby didn't. He was sent to Europe, right into the middle of the killing fields.
When his commander found out he was a big deal artist in the funny papers, he decided to use him as for recon. This meant Jack had to sneak behind enemy lines, sketch the lay of the land, sneak back and explain to his superiors where the Germans were and what they were doing. He was often so close, he could smell their aftershave.
I'd always assumed that Kirby's AstroGnosticism was a contact high off the psychic turmoil of the Psychedelic Era. I was wrong. I keep finding out that Jack was plugged into a worldview that Charles Fort, John Keel and Jacques Vallee would feel right at home with earlier and earlier in his career.
Which brings us to Sept 1957, or more accurately June 1957, since comics are post-dated three months in advance. This was the dawn of the Silver Age of Comics but a distinct fallow period for Kirby.
His partnership with Joe Simon had collapsed and his relationship with industry giant DC/National was iffy since his rough-hewn style was seen as out of step with the times (that problem was fixed when art-god Wally Wood teamed with Kirby on Challengers of the Unknown and produced this writer's favorite comics art ever).
Jack took work where he could get it and got work doing sci-fi and "mystery" books for Harvey Comics, home of Casper the Friendly Ghost and Hot Stuff. Joe Simon may or may not have had some involvement in the scripting and inking, but the stories are most definitely Kirby's. In June, Jack released two books of particular interest, Alarming Tales #1 and Black Cat Mystic # 59. 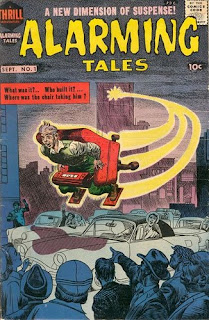 Alarming Tales is interesting in that it contains two stories that prefigure Kirby's major 70s work. One is "The Last Enemy," a clear predecessor to Kamandi: The Last Boy on Earth, which plays such a major part in the Iraq War/Stargate conundrum. 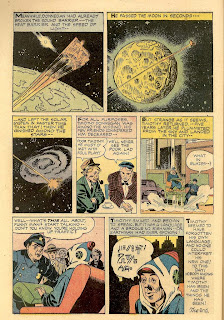 The second is "Donegan's Daffy Chair," a startling prefiguring of what Jeff Kripal describes as Metron's Kabbalistic "Throne Mysticism" in his analysis of The New Gods in Mutants and Mystics.
The story seems to make little narrative sense- a janitor at an aerospace factory gets in an experimental rocket chair and ends up leaving the solar system. He comes back dressed in alien garb and speaking an alien language, utterly and apparently irreversibly transformed by his cosmic voyage.
In The New Gods, Metron (read: "Metatron") used his Mobius Chair for roughly the same purpose- to travel the vast reaches of the cosmos in search of transformative experience. 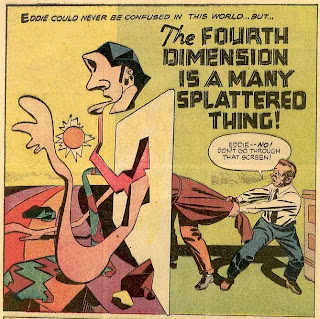 The same issue also presents us with a story about a man who meets a beautiful Dana Scully lookalike from Mars who travels back and forth to Earth using a transdimensional Stargate.
The story is as meh as "Donegan," but clearly shows the very strange and esoteric issues running through Jack's mind at the time. The art is interesting as well, in that it clearly seems to prefigure Steve Ditko's alien dimensions in his classic Doctor Strange run.

Donegan's trip across the cosmos was repeated in Kirby's Space Odyssey/Moon Obelisk dual prophecy, "The Great Moon Mystery," drawn in 1958 but not published until 1966. In that story the astronauts are transformed into beams of light and shot across the Universe (shades of Chris Carter) in an experience that feels like minutes but lasted for weeks.
Alarming Tales had two more stories of interest- one was The Cadmus Seed, a sci-fi story about breeding plant-based supersoldiers that namedrops Cadmus (father of the Samothracian Mysteries) and his army of Spartoi sown from dragon's teeth (loosely borrowed as an army of skeletons sown by the hydra's teeth in the greatest movie ever made).
Another story tells the story of a man's virtuous, self-sacrificing dog who is later reincarnated as his son. 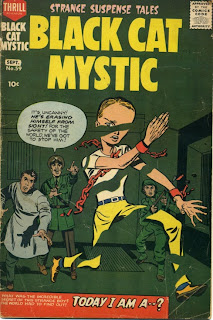 Alarming Tales- with its stories of cosmic apotheosis, transdimensional romance, mythology-inspired cloning and reincarnation-- is all just preamble. The real action on the stands in June of 1957 was most certainly in the pages of Black Cat Mystery #59. Here we see the three major themes of Jack Kirby's teleology laid out before us. 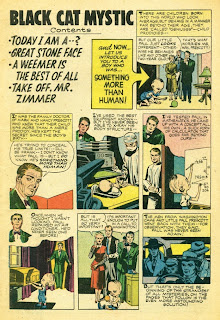 (click to enlarge)
The cover story would have made a great Mytharc episode on The X-Files. It's also remarkably similar to themes Kirby and Lee would explore in The X-Men. It tells the story of a young boy named Paul who begins to display unusual mental powers from an extremely young age and is taken into government custody to be studied. He's kept in a deep underground bunker where he's treated kindly but with extreme caution. 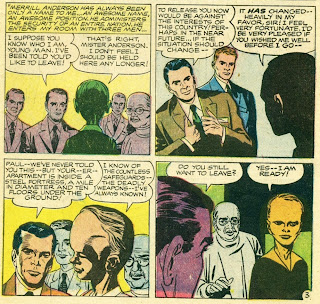 When Paul reaches adolescence, he announces that he is going to leave the bunker which causes the base to go into lockdown. Paul's captors are reasonable but firm- they clearly fear him and are not entirely sure they can hold him.
Now, remember this story is being published during the height of the Cold War at a time when any deviation from conformity was seen as tantamount to witchcraft. Kirby here is telling a story of a superior being who is openly defying the military establishment and isn't interested in being used as a weapon against Communism. 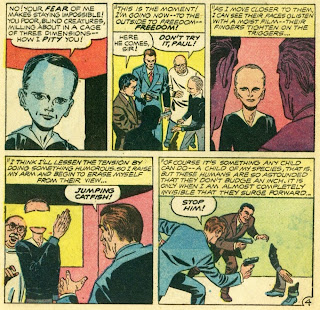 Returning the concept of interdimensional travel again, Kirby has Paul throw his captors offguard and escape from his underground prison by erasing himself from the Third Dimension, an act which is child's play for Paul's new race of beings. 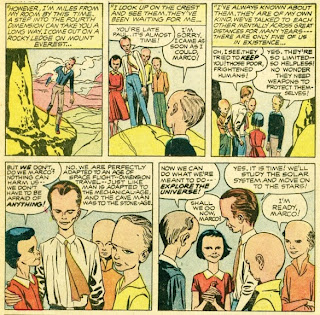 Harking back to the old pulp themes borrowed from Theosophy, Paul meets his fellow new beings on Mount Everest. Note that they are all variations on the Grey type: thin, diaphanous, with oversized heads and eyes.
This story was drawn several years before the Grey type would become popularized. This new race has emerged to leave the planet, and will do so in a way similar to what we saw in the two earlier stories...

...they merge into pure ball of energy and travel at the speed of light. Whether or not they leave their physical forms behind or reconstitute when they reach their destination is unclear.
What we do see is a theme Kirby would explore throughout his career-- traveling the cosmos using nonphysical-- in this case apparently psychic-- means. 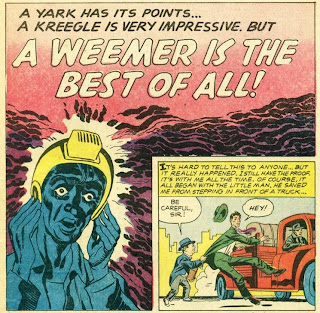 The second story is more like a lost Twilight Zone or Outer Limits episode, though it predates both. A guy who's down on his luck meets a leprechaun/trickster type who presents himself an alien traveling salesman, offering free samples of alien hardware. 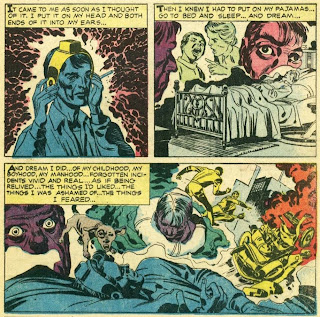 The first device is a kind of psychological repair system, which offers Kirby the opportunity to dip his toes in some of the psychedelic freakout imagery he'd immerse himself in ten years later (note the Kirby Krackle prototype).
The art here is crude and rushed-- Kirby was never comfortable inking his own work. Nevertheless this follows the pattern we've seen over and over again in the Alien Dreaming and the Widening Gyre series; revelation--often a technological revelation-- preceded by nightmare or psychedelic freakout. 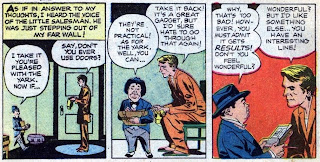 Here we see the kind of imagery that has been reported for millennia-- little people walking through walls, bearing gifts of unimaginable power. And the gift that comes help make the newly healed man unimaginably rich... 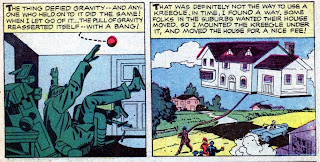 ...and it's an antigravity device. The lucky fellow hires it out to move houses and whatnot.
Perhaps his ancestors would have used the same device to use megaliths for solar observatories, thousand ton blocks of limestone for pyramids, giant stone heads for ceremonial purposes... are you catching my drift here?

Deciding that big business is too stressful, the man takes the third device, a psychically powered teleportation device, which he uses to travel to Peru, home of the Nazca lines, the Vicús pyramids, Machu Picchu and all the rest. Which brings us to the next story... 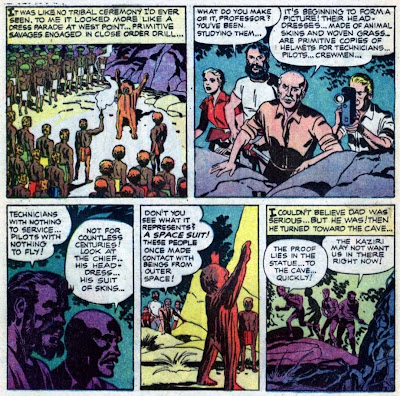 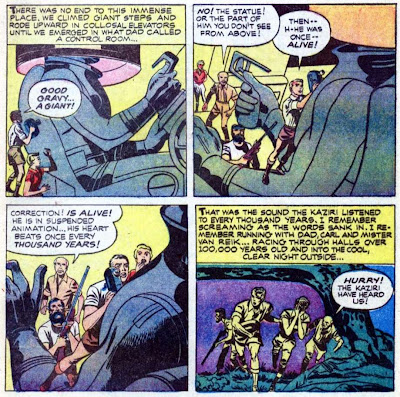 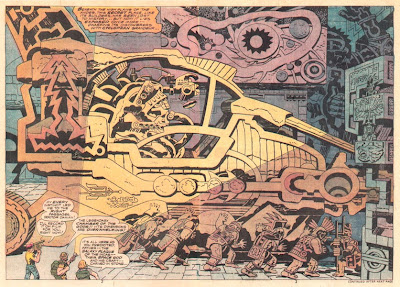 Double page spread from Eternals #1 It was also published a full year and a half before Quatermass and the Pit, six years before the English language version of Morning of the Magicians, ten years before Five Million Years to Earth, eleven years before Chariots of the Gods? and nineteen years before The Twelveth Planet.
In fact, I'm not exactly sure where Kirby could possibly have read anything about ancient astronaut theory in the American media in the 1950s, certainly nothing as explicit as doctrinaire as this.
I suppose there could have been something (Fort perhaps, but certainly not in this Chariots of the Gods type presentation), the only problem is that I've yet to find it.