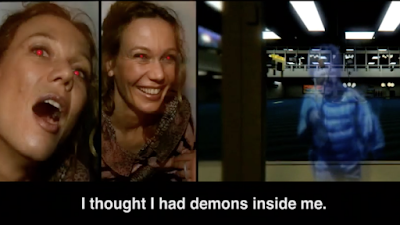 As the great philosopher Red Miller once said, "a psychotic drowns where the mystic swims." I think some other mook said something similar, but he was probably just ripping off Red Miller anyway.
Red's wisdom jibes with my notion that the difference between a mystical experience and a psychotic break is the results. If it helps you get your shit together, it was an epiphany. If you end up riding off the rails, it might have been a psychotic break. Or a dark mystical experience. Same difference.
I was thinking about all of this when the Sibyl did what the Sibyl always does: trigger a series of revelations leading to a deeper truth. That's what it's really all about.
You see, the Sibyl is Synchromysticism. She's the avatar, the living embodiment of it. And you always end up unlocking doors you never dreamed existed when you try to solve her riddles and puzzles. And slowly but inexorably, our false, fragmented reality is all being sewn back together into an eternal latticework of connection and co-incidence.
Case in point: the other day I posted in The Secret History of Rock 'n Roll blog about the band Stereolab, and the power they have to get the soundtracks to dreams I dreamt a hundred-hundred-hundred years ago and get them on tape. I wrote this:

The art I'm most entranced by is the art that feels like it was stolen from my dreams.

There's no ostensible pattern to this. Mulholland Drive, Eternal Sunshine of the Spotless Mind, Max Ernst, early Cocteau Twins, the first Devo album, Tubeway Army's Replicas, certain Industrial music videos, Jacob's Ladder, The Royal Tannebaums, My Bloody Valentine, Brian Eno's 70's work, The Go Team, and Cliff Martinez'  Solaris soundtrack all strike very deep chords in me that I can't quantify, nor am I entirely sure I want to.

That same enchantment reared its head the other day when a Facebook posting alerted me to this revelation, produced by two Sibyl servants, former Twin Simon Raymonde and Dif Juz drummer Richard Thomas, and their Lost Horizons project. Raymonde said he chose this song to embrace his Coctish legacy and enlisted a Swedish Fraserling to write lyrics and a melody to the track.

But the real magic of this track is the choir on the choruses. I don't know if that were Raymonde and Thomas' contribution or the Fraserling's, all I know is that it shreds my very soul.

I've listened to this more times than I probably should admit in the past couple of days, as the vocal harmonies and chord changes are so next-level they are giving me an on-demand mystical experience.  Sus4 tends to do that.

The tune has that "nostalgia for someone else's youth" Go!Team meets Polyphonic Spree vibe, just with a lot more chops and theory. It also has that kind of early 70s movie soundtrack vibe, and generous dollops of Fraserian frills and trills.

The video nails the vibe, alternating the painful optimism of kids dancing on the verses with a surreal Alice in Wonderland montage on the choruses that feels like something you saw on PBS in 1972 or the credit sequence from Night Slaves.

The director is Jonathan Caouette, who made his bones with a movie about his schizophrenic mother called Tarnation. It so happens he made the film to capture the effects of a condition he apparently suffered from called depersonalization disorder.

I'd never heard of it. I'm familiar with depersonalization as a reaction to trauma or experienced during a psychotic episode, but the disorder is news to me. Let's look it up, shall we?

OK, so essentially we're talking the pathologizing of a classic mystical state. Or does it become a disorder when the mystical revelation fails to dissipate as they tend to do?

Diagnostic criteria for depersonalization-derealization disorder includes persistent or recurrent feelings of detachment from one's mental or bodily processes or from one's surroundings. A diagnosis is made when the dissociation is persistent and interferes with the social or occupational functions of daily life.

I guess so. But here's where it gets hinky:

The core symptoms of depersonalization-derealization disorder is the subjective experience of "unreality in one's self", or detachment from one's surroundings. People who are diagnosed with depersonalization also often experience an urge to question and think critically about the nature of reality and existence.

Think critically about the nature of reality and existence? Oh, my: can't have people doing that, can we?

Depersonalization, of course, is a state mystics have long referred to as "ego death":

Ego death is a "complete loss of subjective self-identity". The term is used in various intertwined contexts, with related meanings.

In Jungian psychology, the synonymous term psychic death is used, which refers to a fundamental transformation of the psyche. In death and rebirth mythology, ego death is a phase of self-surrender and transition, as described by Joseph Campbell in his research on the mythology of the Hero's Journey. It is a recurrent theme in world mythology and is also used as a metaphor in some strands of contemporary western thinking.

Ego death and the related term "ego loss" have been defined in the context of mysticism by the religious studies scholar Daniel Merkur as "an imageless experience in which there is no sense of personal identity.

I guess if you die to your ego, you'll lose interest in mindless consumption of meaningless junk. Can't have that either.

Related to depersonalization is derealization, in which you stop swallowing the bullshit this demonic system rams down our throats every minute of every day. Or something to that effect:

Derealization is an alteration in the perception of the external world, causing sufferers to perceive it as unreal, distant, distorted or falsified. Other symptoms include feeling as though one's environment is lacking in spontaneity, emotional coloring, and depth.

And this is bad somehow?

No, this is all just more pathologizing of anyone who sees behind the curtain and beneath the veneer of social conditioning. It's nothing new but we'll be seeing a lot more of it as this corrupt empire speeds towards the scrapheap of history.

Let's see what Caouette has to say about his condition.

JC: It was a completely organic process based on these unusual, psychological experiences I’ve had in my adult life—these strange, trancelike experiences, similar to sensations I remember from childhood when I had a very high fever. 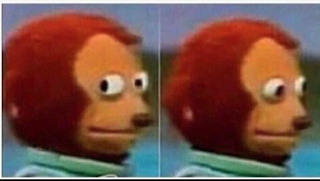 JC: Where I’m half asleep and half awake, just on the cusp of dreamland. And right as I’m about to conk out, this whole plethora of information comes from my own awareness and rushes into my mind’s eye. It’s like a story, or a poem, or a series of images … It only makes sense for a moment and then it dissipates. It’s like this weird waking dream. I wanted to lucidly mimic that in the form of a film and transpose it cinematically.

CW: Can you access that state at any given moment?

JC: Well, it just lives inside me subconsciously. I don’t know if it’s because of this thing I’ve had called depersonalization disorder, a dissociative disorder that was brought on by accidentally smoking angel dust as a child.

CW: So the incident that you talk about in Tarnation, smoking marijuana at age 12 that, unbeknownst to you, had been dipped in angel dust, caused this disorder?

JC: It was a direct result of that, yeah. It had immediate consequences and nobody I talked to could really put it into words until I was able to come to a place myself where I could articulate the experience and some of the problems I was having.

I went to a doctor and he diagnosed me with depersonalization disorder. There is a whole slew of people who have it. it’s mainly brought on from smoking pot or something at an early age.

Well, alright. There you go then.

Caouette brought a number of Secret Sunly feels into a short film titled Holy Christ I Wanna Be David Lynch All Flowers in Time. It's about a signal from a weird French TV show that turns people into the X-Men. Or something. Maybe.
This does seem very depersonalized and derealized, come to think of it. It's very David Lynch meets Videodrome meets the killer videotape in The Ring. Always nice for this GenXer to see 90s It Girl Chloe Sevigny staying busy.
Caouette denies it but given the weight of the evidence, it's clear the title is lifted from the canticle Our Blessed Lady, Queen Dowager of Sibyls wrote and recorded with her beloved Tammuz, "All Flowers in Time Bend Towards the Sun," which children will be singing in worship services once this Mystery Babylon system falls. Along with all the rest of Our Lady's invocations, I should add.
I was right about Jack Kirby 15 years ago, right? Trust me.
Sing in perfect harmony in the comments.