It's a Lovecraft World: Color Out of Space 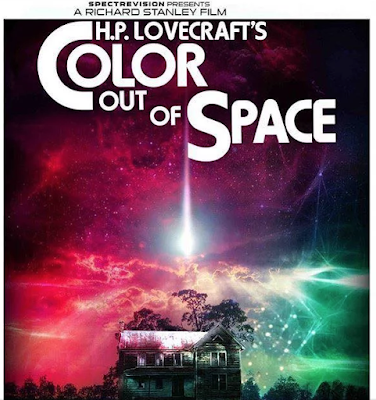 Things have been very hectic here at Secret Sun Central but I finally got a chance to watch Color Out of Space. On Amazon, mind you, since I don't believe the movie was in the theaters a full week around here.

But I also felt Richard Stanley has been trapped in a bit of a time warp since he vanished (pun intended) and hasn't really kept current with more recent developments in horror filmmaking.

For some strange reason it all reminded me of seeing Return of the Living Dead back in the day - at midnight, of course - without the rush of novelty that experience provided.


Of course, I kept my eyes peeled for signs of any Crypto-Fraserite signaling on Stanley's part, but didn't really see much outside the obvious presence of Frasealike Madeleine Arthur (she even has the dimpled chin).

I hate to have to say it, but I didn't really get much of a Lovecraft vibe out of it either, outside of the obvious plot points.

And I have to admit that if you've seen as many of these kinds of movies as I have--and I'm sure of lot of you out there have-- you kind of get a feel for how this is all going to play out.

I wasn't shocked, stunned or amazed by any of it (it's a very loose adaption of Lovecraft to begin with) and I really felt I should have been. I'm glad Stanley is back in action but I wish he'd had a few surprises up his sleeve. I'm rooting for the guy, dig?

The cast was OK as well. Nic Cage was Nic Cage, but it almost felt like it was Budget Nic Cage. Kind of like, "OK Richard, you're paying me that much and you're going to get that much Nic Cage, and not a penny more."
Or maybe Cage just wasn't overly inspired by the script, I don't know.

Don't get me wrong: I'm a big fan of the Cagester. But this wasn't one of his more memorable freakouts. No bees or bear-suits in this thing, certainly.

Joely Richardson was very good in a thankless role but I can't imagine her agent was overly thrilled with how she was lit. I don't recall seeing Eliot Knight in anything before but he was very good as well. Had a bit of a Duane Jones vibe going, which I imagine might have been intentional on Stanley's part.

Madeiliz ArtFrase did what she usually does and Julian Hillard played the exact same character - in every possible, conceivable fashion - that he played in The Haunting of Hill House. I don't begrudge him for it, he's just a kid. Brendan Meyer wasn't too far off his OA's marks either.

I thought Tommy Chong was woefully underused and could have offered an effective counterpoint to what was happening to the Gardner family. By far the best performances of the entire picture, however brief.

Stanley's script offered an effective allegory for the destruction of the family, but unfortunately that destruction is coming about not due to blind, indifferent cosmic forces but to conscious, deliberate actions of suicidally-insane cults and cabals.

It's coming about thanks to agendas that will inevitably and inexorably lead to the same kind of devastation we see in this movie. Only on a planetary scale, if not derailed soon.


I have to admit my hopes for Color might have been artificially high due to the fact that I recently finally got my lazy ass around to basking in the glory and magnificence of Panos Cosmatos' masterwork Mandy, which for my money is the best film of the past decade by far. If you disagree, you're probably here by mistake.

And with the Woke virus rotting Hollywood from the inside-- a virus just now beginning to derail very, very high-placed careers -- it's Indie or bust, if I can help it.

I mean, I enjoyed Once Upon a Time in Hollywood, though I would have enjoyed the thing quite a bit more if a good hour of flab was sliced off it. And I don't need to tell regular readers how much I loved Twin Peaks: The Return, named by Cahiers d Cinema as the best movie of the Twenty-Teens.

And Mandy? Fuck, Mandy blew my brains out of my skull. If anyone has any films like it to recommend, for the love of all that's holy, please do so IMMEDIATELY.


For all its many faults (ie., Ritalin-shriveled soccer-moms dropped into a disaster zone in order to rescue rugged Special Forces men), I have to declare that Annihilation is a better bet for those looking for an effective dose of Lovecraft bugfuckery.

I don't know if Stanley was a bit intimidated by the de facto adaption of the same story he was working from, but you can't help but wish he went a little more gonzo with the material. Maybe he was hemmed in budget constraints or having been too long out of the game.

Granted, I said Lovecraft bugfuckery and not Lovecraft buggery. Because, let's all be reasonable adults here: whatever you imagine his sex life was actually like, Lovecraft's stories are all intensely homoerotic. In fact, you don't need to be a credentialed Freudian to glean the basis of HPL's revulsion for seafood.

See, the problem with Stanley's Color, Gordon's Dagon and Moore's Neonomicon are all the same: they're trying to take fundamentally gay narratives and place them in a heterosexual or even hetero-domestic context. Sorry, it just doesn't work that with ol' H.P. Lovedtwinks.

If you think I'm blowing smoke here, please grow up, rip the scales from your eyes and read those stories again.

Annihilation effectively sidesteps the requisite homocentrism by removing the cosmic horror from the familiar (read: tired) Lovecraftian tropes and facile namedrops (Note to directors: 'MIskatonic University' sweatshirts aren't clever anymore). Plus, you can also interpret the androgynous armed pixies as trans-pixies, if that's your jam.

So points go to Annihilation for best recent Lovecraft adaption.