I haven't seen the Eternals movie yet, meaning I haven't yet seen the movie coming out today called Eternals. But I've seen The Eternals onscreen time and time and time again, and so have you.
The best bits from Jack Kirby's Eternals comics have been adapted for film before, only it was for the first Thor movie, the first Avengers movie, the second Transformers movie, the fourth Indiana Jones movie, the Alien/Prometheus franchise, Heroes, The Fifth Element (somewhat) and arguably, the entire Stargate franchise. You could even say the Eternals were there in spirit in Argo, even.
Hell, throw in Ancient Aliens while you're at it. 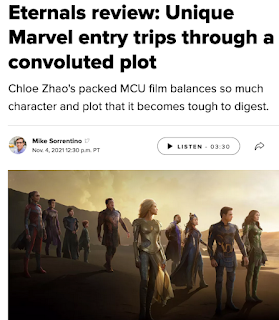 Those are the best places to see The Eternals. As gripping as the original comic series was on my childhood imagination, the characters themselves are really not very interesting, and the storyline was an absolute mess. The critics all seem to think the movie is bloated, confused, and overstuffed with mediocre superheroes, so it's at least faithful to the comics in that regard.
The Eternals suffered from the same problem The Inhumans and The New Gods did before them. And that's that Kirby was so obsessed with grand cosmic struggles, earth-shaking apocalypses and big philosophical questions that he didn't stop to give his heroes actual personalities. They're all stoic and noble and righteous and dull as fuck.
Darkseid - who for all intents and purposes becomes Thanos in the MCU - is a great villain, but the rest of the "Fourth World" cast are ciphers. And that's largely because they were conceived initially as supporting characters for Thor, and later for Superman. Similarly, The Inhumans - whose film adaption came and went without anyone noticing - were created as supporting characters for The Fantastic Four.
Later writers would make good use of The Eternals as supporting characters in The Mighty Thor and The Avengers comics, but they've never - and I mean never - been able to carry their own title.
Since the Thor movies already copped the alien superheroes as gods motif, there's not much left for The Eternals to do. From what I've read, they (and the film) sound quite a lot more like The Inhumans than The Eternals.
The original Inhumans, I should say: Marvel tried to replace mutants with Inhumans when they lost the X-Men license to Fox, but fans gave the concept a very, very hard pass.
Kirby had been toying with the ideas that became The Eternals since the 1950s. It was only after the smash success of Chariots of the Gods that he was able to convince Stan to greenlight an ancient astronaut superhero series.
The problem was that Ancient Astronaut Fever had already peaked by the time the book hit the stands. The first three issues of the series feature Kirby's best artwork of his return to Marvel but the fandom had moved on to younger, slicker artists. And his 2001: A Space Odyssey adaption (and limited series) seemed to satisfy any appetite for Kirby AAT comics.
But Kirby was obsessed with AAT, so much that it formed the core of not one, not two, but three of his Marvel titles. Meaning he shoehorned the concept into his Devil Dinosaur comics, where one would definitely not think they belonged.
So without that explicit AAT context, The Eternals make zero sense, and are really of no use to anyone at all. They're just another bunch of generic alien superheroes: the oldest, corniest, most tiresome trope in the book. 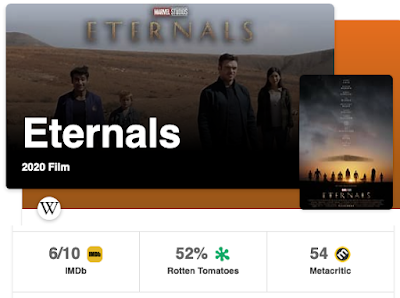 It's too late anyway: the spell has already been broken. The critics smell blood in the water - rightly - with the MCU and have piled on the film like hyenas. Since the public has come to hate movie critics - rightly- that may actually move some fence-sitting punters to the multiplexes. But there's no way in Hell the movie is going to make back its massive budget, and from what I hear, no one is buying any of the merch.
Having created artwork for Marvel licensing for a quarter-century of my life, I can tell you that merch is where the gravy really is. In fact, the last job I did for them were Eternals designs. I fully expect that was the last job I will ever do for Marvel, which suits me just fine. The "Phase 4" characters are never going to move like the original classics did. These characters may be "diverse" but they're also deadly boring, lifeless and lacking in any personality or charisma.
The time to make an Eternals movie was 2012, when Ancient Aliens was picking up a head of steam and the MCU was in its glory. It's too little, too late now. Which is a terrible shame; a pre-Woke Eternals could have been epic. 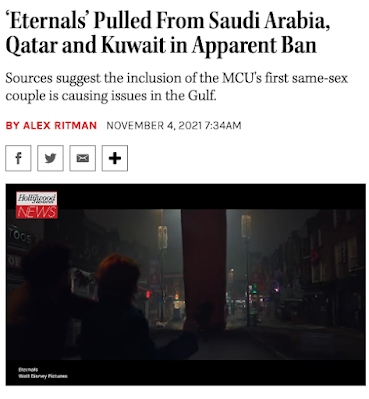 From what I hear, Eternals isn't quite the Woke abortion the fuckfaces on Twitter want it to be, but gay superheroes are simply not going to play in the international market. Superhero movies are popular because parents can take their kids to see something that all ages can enjoy. And for most of the world - and essentially all of the non-Western world - (openly) gay superheroes are simply a deal-breaker.
I'm not saying it's right, mind you. I'm just telling it like it is.
"Diverse" or not, most kids are never going to want Eternals toys if they're seen as a gay thing. I don't care if their Woke Karen moms need to signal some fresh virtue. And even the ostensibly non-gay Eternals radiate a distinctly LGBT sensibility, don't you think? The whole thing does.
I mean, all superheroes are pretty darn gay when you really get down to it, but I mean in a more Pride Month-identity politics kind of way. Or kind of gay, rather.
The hard fact is that it's not about "representation," it's about simple economics. Even if this film squeaks out some OKish box office, it's going to be a financial bloodbath for Disney. Especially with China and Islamic countries giving it a pass. And that could send a lot of potential licensees heading for the exits on future films. 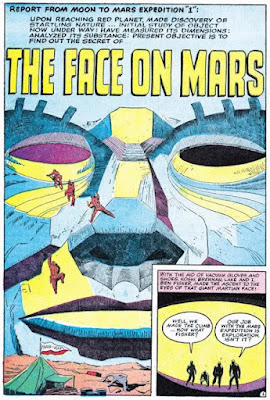 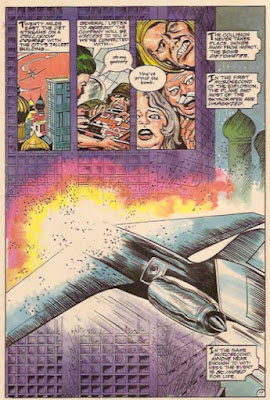 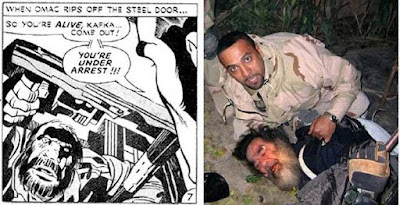 Anyhow, seeing as we're talking about Jack Kirby here, the Eternals comics are full of prophetic insanity and Synchrodelic mindfucking. You can hit the "Eternals" tab to read my past writings on the subject (going back to 2007) and the Jack Kirby tab to delve into his visionary madness.
If you really want to go all the way down the Jack Kirby rabbit hole, check out the Mindbomb series. There you get psi, psychedelia and Dickian-level prophecy, among all kinds of extremely high weirdness.
As far as The Eternals go, you can check out this post on the bizarre prophecy of the Space Shuttle Challenger explosion and this post on the equally bizarre prophecy of Project Blue Beam.
If you're an astrology buff you may want to make note that Jack Kirby and Elizabeth Fraser's birthdays are a day apart.
Express your Eternals gratitude to me in The Den of Intrigue.