The Eternals: And All Challengers Will Be Destroyed 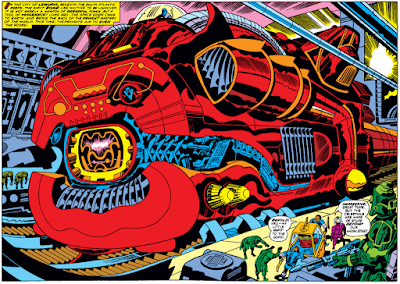 I've written a lot about some of the more apparent connections and prophecies made in Jack Kirby's comics, and in our last installment we looked at an issue of Black Cat Mystic that essentially contained the basic building blocks of Jack Kirby's AstroGnostic opus, The Eternals.

We saw the psychic post-human race congregating atop Mount Everest, the alien technology transfer that led us in the Andes Mountains and finally into the hidden temple of a cargo cult centered around a giant space god frozen in a state of suspended animation.
The Eternals was not a perfect series by any means. Kirby never seemed quite sure what he wanted to say about the return of the Celestials, and the book often lapsed into a kind of New Gods rehash. There were moments of genius, however, usually when Kirby stuck to the basic theme of how the world reacted to the arrival of giant aliens in their midst. Those moments put the Fourth World stories in the shade, for this reader at least.
But Kirby's return to Marvel wasn't quite the replay of the Silver Age glory days anyone had hoped for. And Stan Lee's directive that his editors put the Hulk in all their titles to cash in on the success of the CBS TV series (on which Kirby himself guest-starred as a police sketch artist) seemed to take all of the wind of Kirby's sails. From the first Hulk story (#14) to the premature end of the series (#19), the quality of the art and the writing seemed to utterly collapse, a pattern that seemed to follow all of Kirby's late 70s titles.
Books like 2001: A Space Odyssey and Black Panther had similarly inspired starts and similar collapses half or two-thirds of the way through their short runs. As if to mark the moment, Kirby chose the last pre-Hulk issue of The Eternals to deliver one of the most remarkable stories of his Bronze Age career.
As we've come to expect, the story is bursting with prophetic reverberations of an oblique and dreamlike variety. It's as if we're viewing the future through a funhouse mirror, or a kaleidoscope. With one indelible exception, we see only fragments of prophecy. But the exact connections are unclear. Or elusive, if you prefer. For some reason, it's exactly these kinds of connections that feel more real to me.
But first, some background. 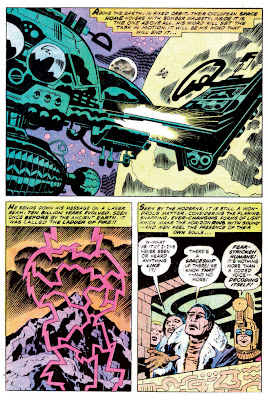 In Eternals #7, three SHIELD agents are teleported by the gods into the company of the Eternal Ajak (decked out in full Incan ceremonial garb) and a human archaeologist, who are in a secret chamber within a pyramid in the Andes Mountains. They are observing a Celestial landing party collecting genetical information-- DNA-- in preparation for Alpha Day.
Orbiting overhead is a massive mothership (note green color, mirroring SOHO footage) containing the nameless prime Celestial. He communicates through a laser beam which resembles a ladder (almost certainly inspired by the Jacob's version of same). This story was written a very long time before optical storage and encoded information became common parlance.
The ladder contains the coded commands of the supreme Celestial, eeerily prefiguring recent theories of aliens communicating over vast distances via neutrino beams. The Eternal and the humans watch the ladder descend and suddenly the giant Celestials are transported through the ladder's code to other parts of the globe. 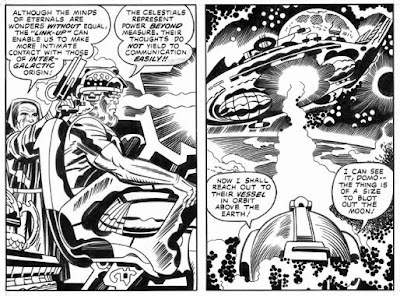 After a Celestial attacks the Deviant (read: "Reptilian") stronghold of Lemuria in #10, the leader of the Eternals attempts to psychically contact the orbiting Godship (bringing us back to one of Kirby's favorite themes) but is violently rebuffed. Note that the Eternal is using electronic equipment to make psychic contact.
Remember this event as well: the Celestial's attack-- and the motivation behind it-- is central to the Mindbomb we're setting off here. 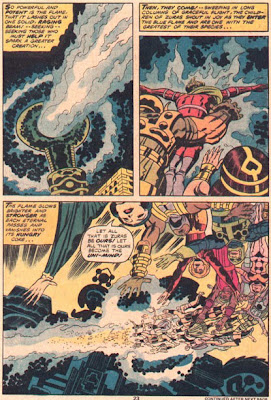 Zuras then summons all of the world's Eternals to unite into a single superbeing called the "Unimind," a being that can stand on equal footing with the Celestials. The Eternals have even brought along some pet humans to take part in the ritual transformation, in which the blue flame transforms the life force of the Eternals into a single being of mind and light.
Here Kirby is clearly shifting from science fiction to flat-out mysticism. 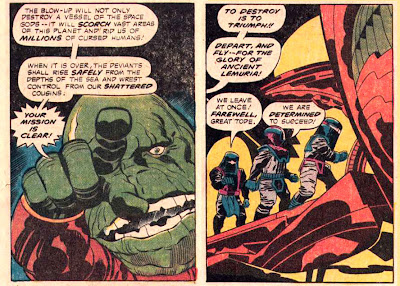 In retaliation for the attack on Lemuria, the Deviant leader, Tode (toads are amphibians and not reptiles, but who's counting?), orders a 9/11-resonant suicide mission in which a doomsday weapon will be flown into the Godship. The resulting fallout will destroy the humans and the Eternals and allow the Deviants to reclaim the surface world as their domain. 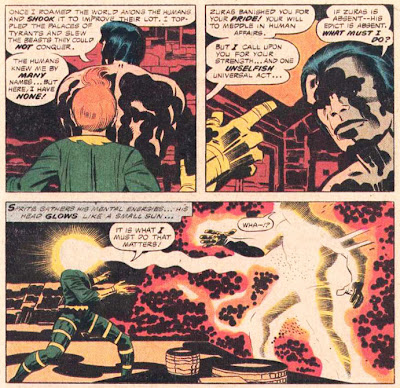 The only two Eternals who don't take part in the Uni-Mind ritual are Sprite, a trickster/leprechaun figure who is left behind to keep an eye on the store, and an unnamed hero who is in fact a thinly-veiled Hercules (the name was being used by another Marvel hero at the time).
The Eternal Hercules was banished by Zuras (read: "Zeus") for his arrogance. Desperate to stop the Deviants' doomsday machine, Sprite transforms Hercules into a metallic warrior (shades of Gus Grissom resonator, Ben Boxer) and conjures up a spaceship for him to intercept the Deviants' doomsday weapon with. 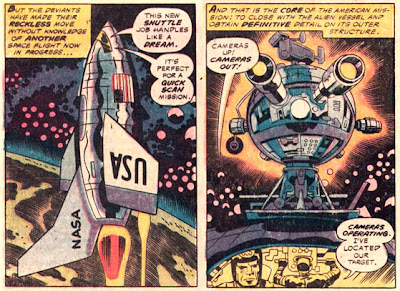 And here's where things get really interesting. NASA sends up a Space Shuttle to photograph the Godship. The Shuttle Enterprise existed at the time Kirby drew this story but wouldn't be launched until four years after this story was published. It doesn't seem like Kirby ever actually saw the shuttle either.*

Now, all of this is very oblique but the astronauts discuss how the ground telescopes have recorded the Godship, but the images look like "blobs." I couldn't help but think of John Lenard Walson's videos of alleged orbital objects, which we discussed here, especially as the Deviant ship shows up on the Shuttle radar (click to enlarge). 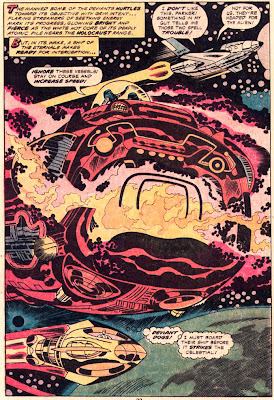 Kirby cuts loose with his trademark cosmic freakouts, the last of their kind that we'll see in the Eternals series (there'd be plenty more to come in Captain Victory, to put it mildly). The Shuttle astronauts find themselves in the middle of Deviant-Eternal grudgematch in orbit, while the enormous Godship looms over head.
Again; more oblique connections, more dream reality type of prophecy, but very much reminiscent of stories I've covered about strange sightings of flaming debris falling from the sky at speeds and angles far too slow and low to qualify as any kind of meteorite, leading some people (read: "me") to speculate about a secret war in low orbit.
There's also been some discussion of flaming debris sightings on the FB group from time to time and more recently the Russians have accused the US of sabotaging their $170 million Grunt Mars probe.
Not to mention the fact that Kirby's basic story-- from 1977, mind you-- of Space Shuttle missions encountering giant UFOs and filming hostile action in space ties directly into a hot and contentious topic in the UFO community over the past decade. 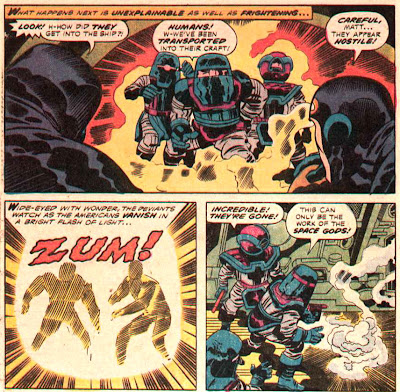 ...where he dismantles the bomb's core and is subsequently killed in the meltdown. However, he is pulled into space and into the Godship. Having proven himself worthy, Hercules is absorbed into the essence of the Supreme Celestial. More mysticism.

The human astronauts telepathically guide the Eternals' spacecraft to a "secret base" in the Mojave Desert, which is certainly convenient for the Area 51 reverse-engineers Kirby was obviously going to do a story about before it all went kerblooey on him.

Kirby has the Deviants-- who unwittingly hijack Durgan's space shuttle-- explode over the "South Atlantic Ocean." And here's where the Mindbomb goes off again.
At the same time Kirby apostle John Byrne was drawing a story about Superman preventing a space shuttle explosion, the world watched in horror as the Space Shuttle Challenger exploded over the "South Atlantic Ocean," the balmy waters off the coast of Florida to be exact. I can't speak as to the authenticity of the video here, but I find it fascinating that there's at least a tangential UFO connection to the tragedy.
But that pales in connection to the Mindbomb going off here. 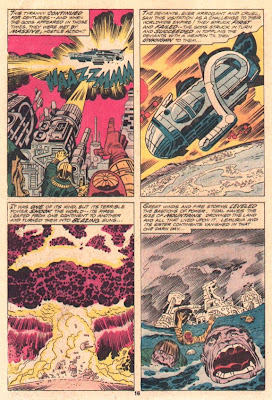 From Eternals #2
"Astronauts" - arguably Kirby's last great story in his second run at Marvel - deals with an ancient grudge match between the Gods and the Deviants (Reptilians). Again, the attempted Deviant assault on the Godship in Eternals #13 was in retaliation for an attack on Lemuria by one of the Gods in Eternals #10.
The Deviants ruled over the humans in the Gods' absence but were driven under the sea when Lemuria sank following a nuclear war between the Gods and the Deviants (see above).
Now the fact that the Deviant astronauts end up crashing in the NASA space shuttle is extremely important here given an exchange between Tode and his top general, Kro... 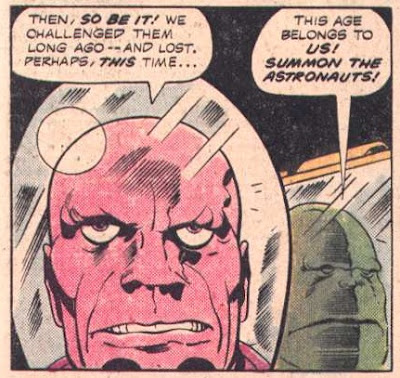 ..."We CHALLENGED them long ago," and "Summon the Astronauts," and then... 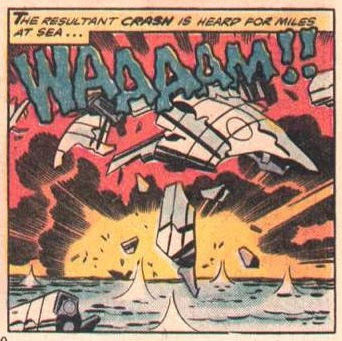 ...those very same Deviant Astronauts --those Challengers-- explode in a NASA space shuttle over the South Atlantic Ocean. Boom. All I can add is that if you haven't yet, I recommend you read "I'll Show You How to Bring Me to Your World."
Maybe that might add a measure of clarity. Or maybe it will simply confuse matters more. I don't know anymore. I don't know anything anymore. All I know I know is that this stuff is starting get under my skin now. 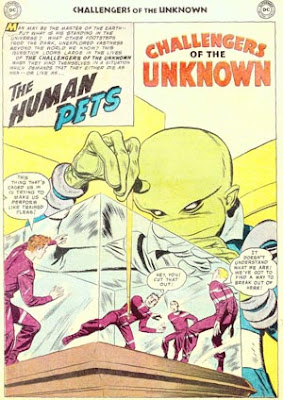 Strangely enough, Kirby's first great super-team of the Silver Age, The Challengers of the Unknown, trace their origin to a similar catastrophic aircrash, although one they obviously survived. Kirby recycled the origin when he and Stan Lee created The Fantastic Four.
Note that Jack - who wrote and drew the Challengers-- also had the team abducted by an alien who is identical to a modern depiction of a Grey in all but color. This story was published in 1958, a full eight years before the Betty and Barney Hill story hit the pages of Look Magazine.
Which should surprise absolutely no one who reads this blog regularly.
* Speaking of Hercules, Kirby would do a pinup of Superman escorting the Space Shuttle in 1984, at the same time he rebooted the New Gods at DC. Unfortunately, his eyes were starting to give out and the finished product leaves a lot to be desired.