Thor: Fit for the King

A typically-tardy, completely-biased review...
Every sci-fi and superhero movie of the past 30 years has at least a little Jack Kirby blood pumping in its veins (and most have a lot), as well as most action movies post-Die Hard. The same goes for most video games as well.
A strange little man who grew up on the hardscrabble Lower East Side of the Depression, nearly lost his legs fighting for Patton and then spent most of his life grinding out the future for a lousy page-rate not only changed the look and rhythm of big-budget Hollywood, he also had an incalculable impact on the 60s counterculture as well. 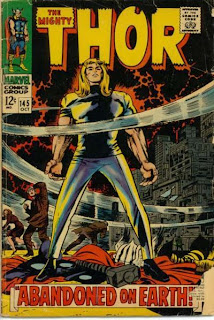 Thor was always closest to Kirby's heart in many ways. He was the apotheosis of the self-sacrificing warrior prince archetype that stormed through Kirby's pages as well as the long-haired, blond Adonis figure that Kirby had a nearly-erotic fixation on.
Kirby reincarnated Thor as Ikaris in The Eternals (about which Secret Sun readers know all too well) and finally as Captain Victory, the dying-resurrecting cosmic warrior who's about to reincarnated once again by Alex Ross, the Michelangelo of the new Super-God Renaissance
. 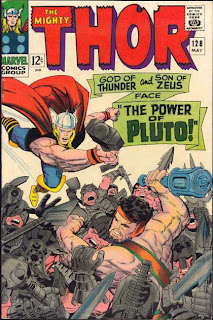 Thor's extremely close to my own heart as well, as longtime readers might remember. My first exposure to the great, shamanic Mystery cycle of the Descent to the Underworld came not in church but in a Marvel Treasury Edition, reprinting the saga in which Thor sacrifices himself to rescue his frenemy Hercules from Hades.
In typical Kirby fashion (Kirby was the main plotter on Thor after the first handful of issues, leaving Stan Lee to embellish with his dazzling wordplay), Hercules is lured to Hell by way of Hollywood, Pluto poses as a studio executive and tricks the superhero to a lifetime of servitude with a deceitfully-written contract.
And those old Kirby-Lee Thor's were a touchstone for me in my senior year of high school when I decided that sanity dictated an escape from the soul-crushing atmosphere of Braintree. I filled sketchbooks copying panels from old Thor comics, particularly from Tales of Asgard, the classic backup feature. 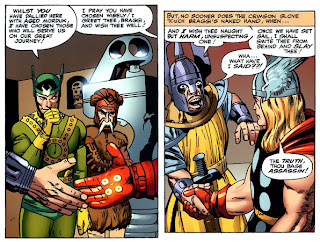 And it wasn't just Kirby, Stan Lee's writing might not be an obvious- or even visible- influence on my own, but it was Lee's obvious love for the English language that taught me that language itself is an art, not just means to an end.
A lot of fans trash Lee for taking too much credit for stories that Kirby or Steve Ditko actually plotted, but their post-Marvel work showed how inseparable Lee's sparkling dialogue was from the Marvel Magic.
Lee might seem like a odd duck in his dotage, but in his prime he was a word wizard of the highest order. So a Thor movie has expectations that other characters would not. I read Iron Man comics, I read Spider-Man comics, I read X-Men comics but none of those characters resonated with me in the way Thor or Doctor Strange did (science vs magick, once again).
When I heard that the Asgardians were to be aliens and not deities, there was an added burden placed on the film since that put the ball in The Eternals' court. 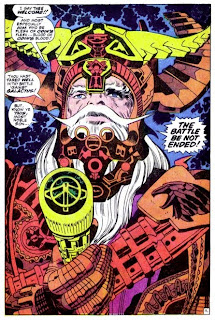 And the heavy emphasis on the Asgard setting not only pitted the film against Tales of Asgard, but also against the Lord of the Rings trilogy. I wasn't sure how Kenneth Branagh could pull off a film like this, given his hoity-toity background. And then there was a lot of static over the casting of Idris Elba as Heimdall, the "white god," a stock Branagh gambit.
Well, I'm happy to say that the film acquitted itself quite nicely. I'm not going to do a stock review here and go over the plot points and all of the rest of that. In fact, I really hate movie reviews for that reason. The plot should unfold as a complete surprise if the movie magic is to work, something these Cliff Notes trailer makers might keep in mind as well. 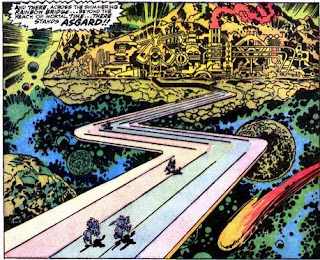 The writers and producers are all obviously aware of Kirby's legacy and seemed extremely mindful of it throughout the film. Plot-points are taken left and right from classic Silver Age Thor yarns, and a very healthy dollop of UFO and High Strangeness lore is smeared on like soft cream cheese on a warm bagel.
For instance, Kirby depicted SHIELD agents as a swarm of anonymous suits when younger artists put them in form fitting yellow jumpsuits, and that X-Files/Men-in-Black vibe carries through here.
Better still, the action takes place in Ground Zero of modern UFO lore, New Mexico. The humans with which Thor interacts play like refugees from Race to Witch Mountain and Jane Foster (played by Natalie Portman) is no maidenly RN but a spunky parascientist, searching the skies for wormholes.
The ultra-voluptuous (though tragically-overdressed) Kat Dennings plays the wisecracking sidekick with her usual charm and Stellan Skarsgard brings his usual world-weariness to his burnt-out mentor role. 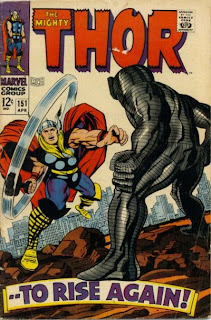 But this is Chris Hemsworth's film and he owns every frame he appears in. This is another Hugh Jackman star-making role we're looking at. He and Portman have good chemistry (though not as good as Downey/Paltrow), and that's a rare compliment from me, not being a big Portman fan.
Branagh coaxes a nuanced performance out of him, though Marvel purists will immediately notice Hemsworth is playing the dashing Hercules from the Lee-Kirby stories, not the earnest Thor. Kirby would have loved it anyway.*
Kirby also would have love to see his Boom Tube (with which the gods traveled on the "waves of the mind") on loan from The New Gods being used by his Eternals/Asgardians.
Kirby'd have loved the Kirby Krackle in the skies and the pagan majesty of Asgard. He'd have loved the AAT, Thor's moment of decision and all of the Kirbyesque ultra-violence. And he'd be very gratified that his weird-ass cosmodelic vision can be faithfully translated into a well-produced and successful summer tentpole.
There were disappointments here and there- the Warriors Three were well-rendered, but Volstagg was farkin' hilarious in the Lee/Kirby comics and is just kind of annoying in the film. Loki's motivations could have used a bit more fleshing out, though he was brilliantly played (even if I kept seeing Brent Spiner in his face).
Balder is a central character in the comics and was MIA here. I thought they should have used some kind of vehicle in the Boom Tubes and really driven home the UFO meme.
Maybe the success of the Transformers series -- which borrows (well, steals) so much from Kirby's Eternals-- will one day lead to an Eternals feature film. The concept has never seemed to resonate with the very peculiar and tiny audience of comics fandom, but I think its time might well be coming for a big screen treatment.
Start combing the beaches of Australia for Ikaris...