Astro-Gnosis: "The Waters Above the Firmament" 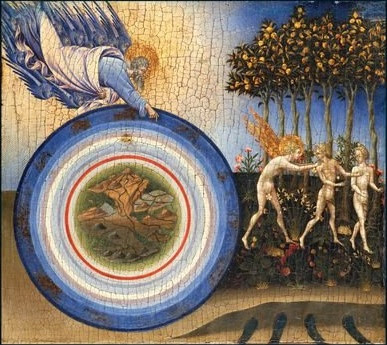 Gnosticism is not easily understood, and was intentionally designed that way.

The point was to drape its extremely radical- and weird- messages in layers of allegory and symbol, some of whose definitions are lost to us today.
There were also a bewildering number of different expressions of Gnosticism (a term invented after the movement's heyday in the time before Rome's adoption of Christianity as state religion), from strongly Christian groups to pagan-influenced groups who incorporated magic, alchemy and concepts such as the Ogdoad from ancient religions.

Gnosticism seems to mean whatever anyone wants it to mean these days. Right-wing Christians from conspiratainment extremists to mushy moderates like the New York Times' Ross Douthat use the term to attack and vilify their opponents within the Church, a rhetorical practice dating back to the earliest "church fathers." Often you see people on the left and right throwing the term Gnostic around willy-nilly to describe (and therefore denigrate) everything from squishy liberalism to Nazism to Maoism and everything in between.

It's not as if there isn't a huge corpus of excellent material on the topic out there. It's easy to get lost in the highways and byways of Gnostic codebreaking and the rich, roiling atmosphere of second-century Alexandria: the most-definitely overlapping magisteriums of the Jews, the Christians, the Mysteries, the Buddhists, the pagans, all more alike and influenced by each other than their survivors today would ever want to admit. But one idea set the Gnostics apart from all the rest...


The fundamental difference that separates the Gnostics from their contemporaries is that, for them, their native `soil' is not the earth, but that lost heaven which they keep vividly alive in their memories: they are the autochthons of another world.
Hence their feeling of having fallen onto our earth like inhabitants from a distant planet, of having strayed into the wrong galaxy, and their longing to regain their true cosmic homeland, the luminous hyper-world that shimmers beyond the great nocturnal barrier.
Their uprooting is not merely geographical but planetary.
And to treat them as aliens in the political or civic sense - which is what happened - could be nothing but an absurd misunderstanding, like giving a Martian a temporary residence visa.
For the Gnostics, all men were in the same condition, although they were the only ones who knew it, and the human community as a whole is implicated in this universal exile, this galactic diversion that has caused us to be dumped on the mud of planet earth.
The Gnostics must have felt this exile even more acutely in that they themselves constituted marginal communities, strangers or ‘foreigners' in the narrow sense of the term, in the heart of a whole humanity of foreigners.
Here there was an historical humus which justified the Gnostic feeling of exile, of being a planetary foreigner: `I am in the world but not of the world' is the most basic Gnostic formula.
So the problem is simple, and one begins to understand how the Gnostics saw it: man, then, is a lifelong exile on a planet which is a prison for all mankind; he lives in a body which is a prison for the soul; he is the autochthon of a lost and invisible world.
The Gnostics by Jacques La Carriere 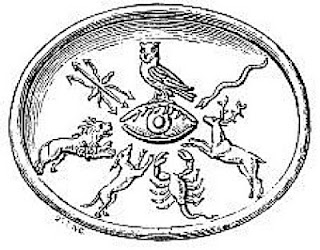 Eric Vogelin's work is wildly popular with conservatives looking for cudgels and meat-hammers to bash Gnostics, quasi-Gnostics and not-really-Gnostics with, but even so the great German scholar understood the basic heart beating at the core of the ancient heresy:


Of the profusion of gnostic experiences and symbolic expressions, one feature may be singled out as the central element in this varied and extensive creation of meaning: the experience of the world as an alien place into which man has strayed and from which he must find his way back home to the other world of his origin.
"Who has cast me into the suffering of this world?" asks the "Great Life" of the gnostic texts, which is also the "first, alien Life from the worlds of light."

It is an alien in this world and this world is alien to it.
Therefore the question, "Who conveyed me into the evil darkness?" and the entreaty, "Deliver us from the darkness of this world into which we are flung." The world is no longer the well-ordered, the cosmos, in which Hellenic man felt at home; nor is it the Judaeo-Christian world that God created and found good. Gnostic man no longer wishes to perceive in admiration the intrinsic order of the cosmos. 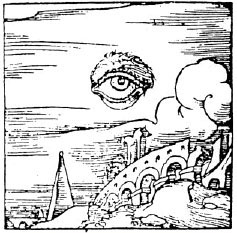 Flying "eyes" have been seen for thousands of years

In the ontology of ancient Gnosticism this is accomplished through faith in the "alien," "hidden" God who comes to man's aid, sends him his messengers, and shows him the way out of the prison of the evil God of this world (be he Zeus or Yahweh or one of the other ancient father-gods).


And not all modern right-wingers are anti-scholarly when it comes to Gnosticism. Catholic intellectuals often understand its message, they just realize it's bad for business.


To the Gnostics of old … this world is an immense prison guarded by malevolent powers on high, a place of exile where the fallen and forgetful divine spark dwelling deep within the pneumatikos (the “spiritual man”) languishes in ignorance and bondage, passing from life to life in drugged sleep, wrapped in the ethereal garments of the “souls” it acquired in descending through the planetary spheres, and sealed fast within the coarse involucrum of an earthly body.
The spiritual experience at the heart of the Gnostic story of salvation was, as Hans Jonas puts it, the “call of the stranger God”: a call heard inwardly that awakens the spirit from its obliviousness to its own nature, and that summons it home again from this hostile universe and back again to the divine pleroma—the “fullness”—from which it departed in a time before time. 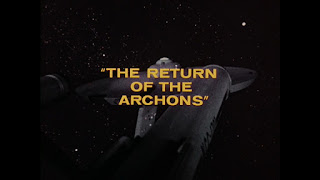 Gotta love that saucer section.
One of the primary Gnostic texts-- a generally accepted Creation narrative-- is Hypostasis of the Archons or "Reality of the Rulers." We've looked at it here before but it describes a situation in which emanations from the Godhead or Monad take form and come to know themselves. But one in particular sees himself as superior to the others and creates a false world in which to imprison lower emanations from the Monad, which decrease in spiritual power the further away from the source they are.

This false-creator is variously known as the Demiurge or Ialdoboath of Samael. Who, uh, came from Outer Space...


Their chief is blind; because of his power and his ignorance and his arrogance he said, with his power, "It is I who am God; there is none apart from me." When he said this, he sinned against the entirety. And this speech got up to incorruptibility; then there was a voice that came forth from incorruptibility, saying, "You are mistaken, Samael" - which is, "god of the blind."
His thoughts became blind. And, having expelled his power - that is, the blasphemy he had spoken - he pursued it down to chaos and the abyss, his mother, at the instigation of Pistis Sophia.
And she established each of his offspring in conformity with its power - after the pattern of the realms that are above, for by starting from the invisible world the visible world was invented.
As incorruptibility looked down into the region of the waters, her image appeared in the waters; and the authorities of the darkness became enamored of her....

The rulers laid plans and said, "Come, let us create a man that will be soil from the earth." They modeled their creature as one wholly of the earth. 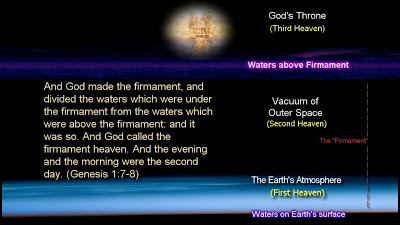 Of course, reading the Hypostasis of the Archons, with its heavenly hosts of celestial powers, including one who stands up against all the others and creates the Cosmos in the image of a celestial goddess, and the "waters" and then the creation of man, you can't but be reminded of this text, can you?

That he might divide the monster and do artful works.
He split her like a shellfish into two parts:
Half of her he set up and ceiled as sky,
Pulled down the bar and posted guards.
He bade them to allow not her waters to escape.
He crossed the heavens and surveyed (its) regions.
He squared Apsu's quarter, the abode of Nudimmud,
As the lord measured the dimensions of Apsu.
The Great Abode, its likeness, he fixed as Esharra,
The Great Abode, Esharra, which he made as the firmament.
Anu, Enlil, and Ea he made occupy their places. When Marduk hears the words of the gods,
His heart prompts (him) to fashion artful works.
Opening his mouth he addresses EA
To impart the plan he addresses EA
To impart the plan he had conceived in his heart:
"Blood I will mass and cause boned to be.
I will establish a savage, 'man' shall be his name.
Verily, savage man I will create.
He shall be charged with the service of the gods
That they might be at ease! The ways of the gods I will artfully alter.
Though alike revered, into two (groups) they shall be divided."

So it's clear beyond any possible argument that Gnosticism preached a message of alienation, of belonging to another world. Of being higher beings imprisoned in meatsuits.

The question is how literally do we dare take this? Do we keep all this lost in the misty miasma of mysticism, or do we cross-reference with other texts (oh, like, you know, THIS) and a modern understanding of the cosmos and our own history- and cough, cough, DNA-  and see what comes of all that?