Jack Kirby may not be a household name, but we all are immersed in his visions. So many of the Hollywood wizards people celebrate today - not to mention video game makers - were raised on his comics.
You can essentially separate action and sci-fi cinema at the point before and after Jack Kirby fans poured into Tinseltown and changed the look, tempo and intensity of these films. Somehow Kirby tapped into something so incredibly deep in the Collective Unconscious that it transformed his work and subsequently transformed society. It simply took some time for the technology to put Kirby's visions on the screen.

But Kirby may have been more than a mere visionary cartoonist- as if that's not enough in and of itself. I remember one night I was lying on the couch, flipping through a stack of Kirby's Eternals comics when a documentary on the Discovery Channel was talking about how shamanic art in different cultures had similar features- abstracted human figures, dots, squiggles, and odd geometric designs. What struck me about that was in the mid 1960's Kirby's art underwent a startling transformation and incorporated all of those motifs. 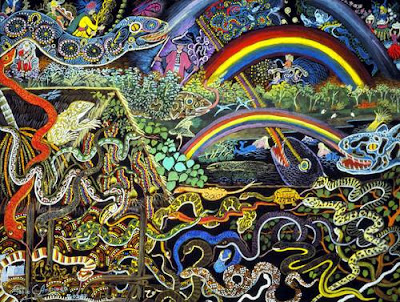 Subsequently, Kirby's Marvel work became popular with acid-dropping college kids. And when I am lost in my musings (which is pretty much all the time) I sometimes wonder if the man didn't drop acid himself. It wouldn't surprise me; in fact, it would explain a lot. Kirby was an artist, not a stockbroker, and had hip baby-boomer kids. But at the same time I don't know if acid or any other mind-altering drugs are necessary to tap into the deep recesses of the dreaming mind. As it is, Kirby's work was already infinitely more mind-bending than the Haight-Asbury artists, as talented as they were. 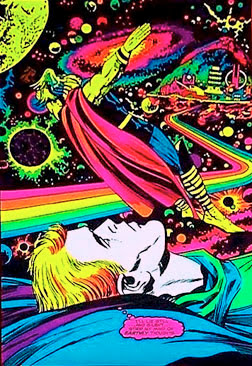 If anyone in the media was a shaman, it was Jack Kirby. Among tribal societies it's believed that shamans can transcend the limitations of time and space. So could that explain Kirby's bizarre foreshadowings of the Gulf War, 9/11 and the Bush era? Or was some outside intelligence driving his visions? And is there any real difference between the two?

It's important to remember when you see some of the wacked-out stuff Kirby put on paper that he claimed that his stories existed inside his mind, and he simply traced them onto the page. But Kirby's psychedelia wasn't the self-conscious, self-important variety of the Boomer cartoonists who followed in his wake. In fact, Kirby's stories are rife with corny dialog and silly characters. His work came from the same sensibility as 50's drive-in movies and the pulps. And it was only with the guiding hand of super-salesman Stan Lee that Kirby's fever dreams were able to reach the mainstream. He most certainly didn't think of himself as a shaman or a visionary, which may well be what allowed him to really dive into the deepest waters of the subconscious mind.

But using therapeutic terms like "the subconscious" makes all of this too pat, too easily pigeonholed. Kirby was gripped by something powerful and compelling, as are all artists and visionaries like him. Many people like that often teeter on the brink of full-blown schizophrenia. The line between a shaman and a madman is vanishingly small. It's almost always mind-numbingly depressing when the line is crossed. It's even more depressing when it's exploited for profit's sake.

The problem is that trying to write about all of this without sounding like a credulous idiot is a pain in the neck. It's tempting to leave all of the interlocutory jargon behind and speak the language of the Dreaming Mind itself. You see this language in Blake's poetry, the Bible, and the work of writers like Plutarch or Ovid.
But there's always the danger that you can follow shipwrecks like Syd Barrett into the abyss. I often wonder how Jaz Coleman is able to function, he can be so terrifyingly unhinged at times. I wondered the same about Philip K. Dick after reading through his Exegesis or Elizabeth Fraser in 1994.
===========================================