That's the Spirit (but not Religious) 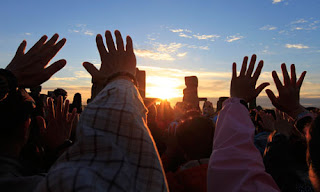 "Spiritual but not religious" is a phrase that's become increasingly common these days. What exactly the phrase means depends on who lays claim to it. For some it means they still believe in church teachings but prefer to sleep in on Sunday. For others (more than the former category, probably) it means a belief in angels, reincarnation, and a host of quasi-Christian/New Age syntheses.
It's one of those times when language fails us, something that seems to happen more and more often when dealing with anything esoteric (see: Aliens, Ancient).
You could fill a dictionary with words whose meaning has been degraded, tarnished or even reversed (like "hipster") in the past 30 years or so. Hyper-mediation is to blame, but our public discourse is even more so, never mind the dumbing-down process going on in our schools and on our TVs. Because of this, we have to use words provisionally, adding disclaimers like "but not religious" among many others. Many of us have to devise something on the level of a creed to navigate the minefields of language we're face with.
Unfortunately, even when all that is said and done, the concept of "spirit" itself is like quicksand. It tends to describe either some kind of emotional state on one end of the spectrum and a belief in ghosts on the other. Which is to say that some people find a self-construction of beliefs, practices and rituals to be comforting and others a belief in communing with disembodied personalities. Often both.
That's all fine with me. You'd be surprised how many people who claim to be above all of that simply construct a parallel analog thereto, whether it's based in "science" or politics or sports or whatever. It's inevitable since we either atomize ourselves as mere consumers in a mechanistic, material view of reality (an increasingly popular option) or we find some way to tap into something beyond ourselves.
In that regard, what we call "spirituality" is the operating system software to facilitate that process. You won't find very many long-lasting secular societies in history. Atheism may be painted in the media as the inevitable next step in the grand march of history, but it's actually a time-tested symptom of a declining civilization, one that surrenders to the comforts of materialism and urbanism and fails to reproduce itself.
We certainly saw this in Greece and Rome, as the Cynics and the Skeptics turned their backs on the old gods and the old ruling families gave way to more vigorous peoples from the east.
But at the same time there was also a radical religious fundamentalism running a parallel track to the secular. In the case of Rome, religious extremism among the Plebeians and a nihilistic atheism among the Patricians ultimately led to Constantine, who himself led to Theodosius, a blood-thirsty theocrat who drove the Empire into the ground, where it gasped for air for a century before the Goths finally put it out of its misery. Not a comforting precedent. 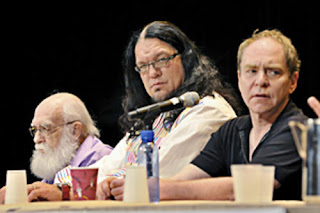 There's a myth among the "Brights," as they like to call themselves, that secularism inevitably leads to Enlightenment, when it actually leads to materialism and Me Generationism. Richard Dawkins is in fact the spiritual godfather of Paris Hilton and Kim Kardashian.
When there's nothing to believe in, why not indulge in raw hedonism and materialism? Why not create a culture devoted to nothing but tangible pursuits? Maybe 2% of the population (at most) will adopt "Reason"-- whatever that means-- as its new god and the rest will look out for Number One.
Fundamentalism is equally materialistic. Never mind the obvious example of the "Prosperity Gospel"-- by far the most vigorous brand of Evangelicalism in the marketplace. If you get any Fundamentalist or Evangelical talking, the conversation will inevitably come down to politics and politics only, right-wing politics to be precise. Your Pentecostal and Charismatic types maybe less so, but they too are often motivated by what "they"-- "they" meaning "not me"-- are doing in the here and now (read: "gays").
Spirituality-- however you chose to define it-- is an indispensable part of our operating system as a society because there come times when there's not much else to hold on to. We've enjoyed an unparalleled period of prosperity and comfort, but there are all sorts of indicators suggesting that period may be coming to a close. But Spirituality also inspires people to think beyond their own temporary interests and think about the future as well.
The question then becomes which spirituality will emerge as the old ones wither-- in North America and Europe, at least. Many people rightly turn away from "spirituality"- and by God, I truly despise the word itself-- since we associate it with people, values and ideas that make us physically ill.
Whether its organized religion or ditzy aunties clutching their crystals or whining media gurus dispensing refried bromides on HuffPost, the word "spirituality" has a whole host of sick-making associations attached to it like lampreys.
But at the same time I loathe its usual definitions, I also understand that it's a concept that no truly healthy - and sustaining- society can do without. But how that concept is disseminated in another question entirely. I'm reminded of how refreshing the concept of the "New Age" seemed in the early 80s before it was immediately hijacked by the ditz brigades.
In turn, "neopaganism" became appealing to some people, and then the Christian mysticism of The Da Vinci Code milieu, and then finally how "occultism" became a refuge that your maiden auntie couldn't follow you into. It's amazing how quickly things are used up and discarded these days (how queasy do you feel when you hear the term "consciousness," for instance?).
The point being is that this operating system I refer to often needs to define itself but by defining itself it becomes fodder for consumer culture. It's something that's happened to every counter-cultural movement in history, recent history at least. But here's where evolution demands the disclaimer, demands the negotiation.
What a new spirituality-- let's stick with "operating system" so I don't puke-- needs to do is identify itself by what it seeks to accomplish and how it intends to go about that. The buzzwords might work in the old media context, when everything had to be boiled into soundbites, but new media allows room to breathe. You can describe your goals and your means without resorting to labels, if you so desire. 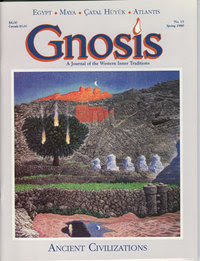 It's amazing how what is done around here is really no different than what the ancients did- the smarter ones who didn't take everything literally, that is. Symbolism and synchronicity were pretty much the primary tools in the esoteric kitbag even then, often accompanied by various kinds of divinatory tools.
It was understood that the gods or the angels or whomever spoke to people in symbolic language and that symbolically-charged coincidence was usually the means of transmission. Then you add in the various meditation techniques, the augmentations (if you will), various types of scarabs or amulets and assorted systems of divination and you understand that that ancient esotericism was a remarkably pragmatic undertaking, a way to understand the nature of the world and use that understanding to get certain things accomplished.
Sure, your Richard Dawkinses may scoff at it all but people who'll still be remembered long after he's rotted away took it all very, very seriously.

Carl Jung was one of them, and perhaps the most important for us today. He was able to re-translate a lot of these operating systems that either been forgotten or fallen into disrepute for modern people. Of course, his writing is often hard to parse and it's best to rely on worthy interlocutors to understand but that's the way these things go.
There are a whole host of others who can help navigate the currents as well. I'd only recommend you stick with the ones who seem to be planted in those time-tested means, rather than going for any "version 1.0.1" type of systems. If you catch my drift.
If you've gotten this far I don't need to sell you on any of this, but this essay isn't about selling you something. If anything, it's about encouraging you to dust off the old books you bought when this was all new and redouble your efforts-- and your commitment to the path you're already on.
Sometimes in the middle of a journey you tend to lose sight of where you came from and where you're going. Taking another look at the roadmap and the itinerary can be a great help if you have to stop and change a tire, or you run out of gas in the middle of nowhere. Metaphorically speaking, of course.
at September 20, 2011