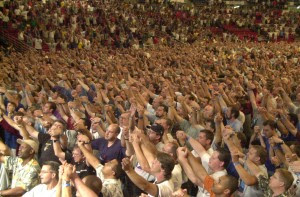 There are so many words in the English language that trigger deep feelings of nausea in me, but perhaps none so much as the F-word. Yes, every time I hear the word "faith" -- or worse, "people of faith " -- I feel involuntary spasms at the back of my throat, the room starts to spin, and images of rotting tuna sandwiches fill my eyes.
Well, not quite but close enough. "Faith" is one of those buzzwords that overpaid media consultants have injected into the memestream. It's meant to be a stand-in for "organized religion," a stand-in that's meant to soften the jagged edges of religiously-motivated political pressure groups (or more accurately, politically-motivated religious pressure groups).
It's kind of like the etymological equivalent of the "you wouldn't hit a guy with glasses" gag from some old Daffy Duck cartoon. The closet cases and hausfraus that form the core of these groups can go around cheerleading for more invasions and bombing campaigns and electing sociopaths totally beholden to corporate and bankster power with impunity.
The minute you raise an objection, the concern trolls at The New York Times and Newsweek start wringing their hands about "faith under fire" and begin pointing out all of the token charity fronts that these "faith groups" from across the monotheistic (there's no such thing, but we'll get to that in a later post) spectrum slap together to justify their tax-exempt status. Anything to divert people's attention from the fact that organized religion as we know it today was created by autocrats to act as tools of political conquest.
Faith also brings up mental images of nanas and aunties at shrines, praying to one saint or another (all of the saints and church fathers that weren't fictitious appropriations of pagan gods were invariably born into or sponsored by aristocratic families -- look it up if you don't believe me). You can just smell the old lady bouquet when the word is spoken. Enough of all of that.
No matter how much you or I hate the word, the fact of the matter is that, like "spirituality," no healthy society can operate without a large degree of faith. We're not talking about the euphemistic neologism now, we're talking about the fact that it takes an act of faith to get through the day. We all take so much on faith that I think we'd all go into a state of panic if we stopped to think just how much we actually do take on faith.
But the reason I left the Church was because of the concept of "Faith." I can deal with the fact that I take it on faith that I won't be struck down by an asteroid when I step outside my door, or that I take it on faith that the guy barreling towards me on the other side of the undivided highway isn't suddenly going to careen into me head first and send me to the hospital or the grave. 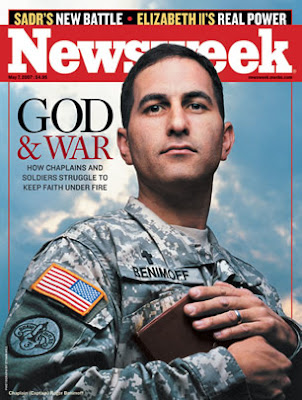 What I couldn't take on faith was a system of belief that my actual experience was telling me was falling apart, no matter how hard I wanted to reconstruct my blissful memories of church from my childhood.
What was replacing it was a reductive, tribalist cult of state, no different in theory --or practice-- than the old Jupiter (literally, "God the Father") cult of Rome. There was so much involved in this faith that contradicted everything I knew or had experienced about the world, never mind the fact that the faith itself is ridden with internal contradiction. And the religious experiences I had in a more countercultural milieu were infinitely more potent and transformative.
But as I've said before it wasn't all of that that bugged me- you have to let a lot of things slide when entering into any belief system, whether religious or secular. It was the fact that the "faith" had become totally subsumed by temporal politics. The denomination I grew up was split down the middle into liberal and conservative camps who barely seemed to remain on the same planet, never mind within the same church.
The work of the writers who rekindled my interest in the faith of my childhood-- Paul Tillich, John Dominic Crossan, Scott Peck, Matthew Fox, Karen Armstrong-- were so outside of the mainstream of what American Christianity had become by the early 90s they were nearly alien.
And what American Christianity had become was an amen corner for the neo-colonial and neo-conservative ascendancies within the Republican Party. I didn't realize it, but the seeds of something much deeper and stranger were being sown at the same time, seeds that would take root and lead me away from all of that misplaced nostalgia.
In the space of the month that I started going back to church, I'd experience a rash of synchronicities and prophetic dreams, bring home my first modem and get online, and watch the pilot episode of The X-Files. And the rest is history.
"Faith" soon tasted like O'Douls compared to the acid-laced Everclear of Synchronicity. I never looked back. 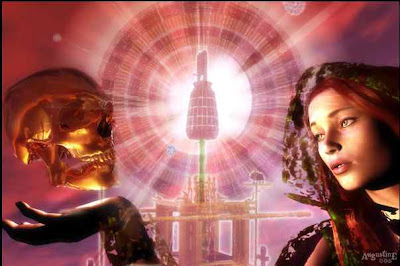 Even so, I still believe in faith-- the F-word-- in the Stan Lee "keep the faith, True Believer!" sense.
As in be brave, stick to your guns and believe in what you are doing. I still have faith that there's a purpose and a plan that waits for those worthy enough to divine it all to tap into. The difference is that where faith (as society defines it) is a closed circuit-- a dead end-- the alternative thereto has a whole kitbag of tools to plug you into the raw face of Infinity. If you have the faith to stare into it.
at September 28, 2011