I've been sifting through The Secret Sun archives, which is a lot harder than it sounds. There are thousands of posts that got scrambled by Blogger interface changeover, resulting in walls of unbroken text, multiple fonts and text sizes, misaligned images and paragraph breaks, and all other kinds of digital mischief.

But if you go to the archive listing on the main page you'll see I'm slowly but surely getting a carefully-curated selection of posts back up.

I was reading through the Secret Star Trek posts last night (which are a chaotic mess, having burst forth during a particularly-manic OCD episode) when I got a message from our pal Isaac Weishaupt.

Isaac had come across a very interesting interlude in a book on the creation of the ARPANET, in which engineers on the project were pressured into signing up for EST workshops, EST being a kind of prototype for NXIVM, only without the branding and sex slavery (at least as far as I know). This brought to mind claims that everyone who worked on the RV programs at SRI was a Scientologist. 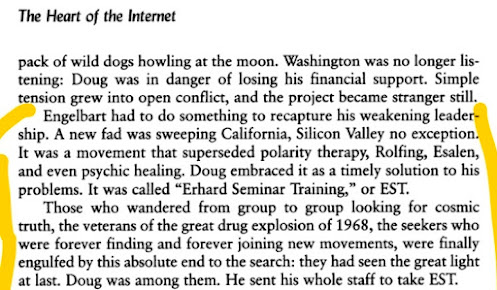 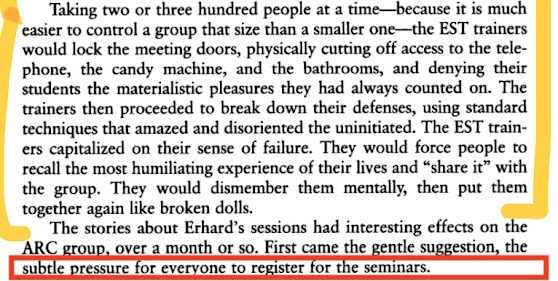 Isaac was curious as to the connections between Esalen and The Nine, which are far more than a "connection" considering that The Nine -- in the form of buxom young Englishwoman Jenny O'Connor -- were in fact running Esalen for a number of years. 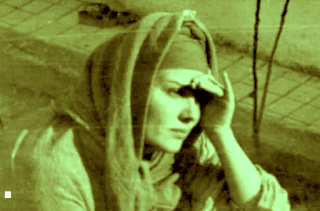 Jenny's channelings were the law at the Big Sur institution, from at least 1979 (when Esalen co-founder fell out of the Rajneeshees, whose cult he'd been recruited into) to at least 1983 (when The Nine were taken off the Esalen masthead), but more likely until Dick Price's extremely hinky "accidental death" in 1985.

As I wrote in the Secret Star Trek series:

But it was very clear that there was a definite line of demarcation between Price's Esalen and (Michael) Murphy's Esalen and that the men had followed their interests in very opposite directions.

At the same time Price and Jenny (and if you insist, The Nine) were remaking the workshop/spa end of the spectrum in their image, Murphy had begun his work with Soviet scientists and so on and ne'er the 'twain would meet. The two founders were like an old married couple who agreed to tolerate each other. As Price said of Murphy, "He puts up with my ETI and I put up with his KGB."

Mother Jones did a negative piece in December 1979 ("Esalen Slides Off the Cliff") that focused on Jenny and The Nine. The writer, though a leftist, wasn't necessarily opposed to psychic phenomena, he just thought Jenny was mediocre.

In case this all seems like old news, it's not.

Because it was through Esalen that the Rockefellers ran the Soviet Exchange Program, which culminated with Boozin' Boris Yeltsin being installed in the Kremlin as the Rockies' proconsul.

In 1978 Whitmore introduced Englishwoman Jenny O’Connor to the Esalen Institute...(i)ncredibly, not only did the Nine give seminars at Esalen through her, but from 1979 until at least 1982 they effectively took over the Institute.

This period was particularly significant for Esalen. Many of those who attended O’Connor’s seminars became prominent in political circles both in America and the USSR (through the Institute’s Soviet Exchange Program), as Jack Sarfatti wrote (his emphasis): "The fact remains… that a bunch of apparently California New Age flakes into UFOs and psychic phenomena, including myself, had made their way into the highest levels of the American ruling class and the Soviet Union and today run the Gorbachev Foundation."

It was through O’Connor that the Nine reached Washington, including the circles from which Al Gore – an unashamed fan of the paranormal – was to emerge...It’s a chilling thought that if Gore had become President, who – or what – would have influenced him? 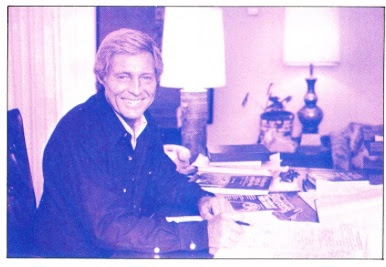 And it turns out you can't talk about EST without talking about Leslie Stevens, either.

Stevens had no connection to Esalen that I can tell, but his book est: The Steersman's Handbook, a left/libertarian manifesto that spelled out how technology would change society, would have an oblique influence on Werner Erhard (aka Jack Rosenberg) the self-help/human potential guru who seems to be Michael Murphy's version of Jenny O'Connor, meaning the onetime close associate who came to be a liability, requiring some judicious rewriting of the historical record. 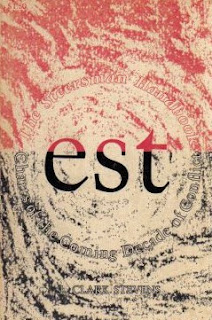 But this is par for the course:

Two weeks before Easter in 1971, Thaw wandered into the City Lights Bookstore and bought a copy of est: The Steersman Handbook, by L. Clark Stevens. Est, for Stevens, meant "electronic social transformation...Thaw says he left the book with Erhard's "Facilitator," a combination valet and sidekick.

est: The Steersman's Handbook seems to have had its own influence on Star Trek, which may in fact be further evidence of Stevens' hold over Roddenberry.

From the est Wiki:

Just a few years later Roddenberry would be talking about the "New Human":

The New Human movement represented a popular advancement of the Human civilization in the 23rd century, a grouping created as an outgrowth of the advantage of potential in Humankind on Earth and other Federation worlds where Human populations lived in total peace and were able to devote themselves entirely to their own betterment. Without conflict and turmoil, education became more advanced and the intelligence of the average individual increased, creating a dynamic of social freedom not before experienced by the species.

HERE'S WHERE THE LUCIFER BIT COMES IN
The first season of The Outer Limits plays like the plots were all taken from a Pentagon white paper on potential alien contact scenarios. The most compelling episode for our purposes is Stevens' "Production and Decay of Strange Particles."

Leonard Nimoy guest-starred in Stevens' "Production and Decay..." which dealt with a nuclear reactor melting down due to another mad German scientist messing with non-human entities, in this case, disembodied entities invading from another dimension and taking possession of human vessels.
Stevens serves up some truly shocking imagery, presenting this all as a nuclear black mass complete with Host. Again, we see an explicit combination of the scientific and the sorcerous, as well as Stevens' fourth wife, the beautiful Allyson Ames (who we'll see again shortly).

Is there something to this idea that splitting atoms opens gateways to other dimensions?
I can't rightly say, but do remember the H-bomb tests carried out in the South Pacific exactly a year before the Roswell Rituals were called "Operation Crossroads," which was overseen by Roswell AAF personnel, including General Ramey.
Also remember Episode 8 of Twin Peaks: The Return, which portrays the same kind of dimensional breach Stevens portrayed in what looks to me like an obvious tribute to The Outer Limits. 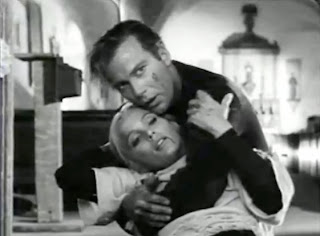 Then remember that Leslie Stevens enlisted none other than the future Captain Kirk (who Roddenberry didn't actually want as his Captain) and headed off to Esalen's literal backyard to film his extremely strange and unsettling art-horror film Incubus.

Concerned that the authorities would not grant permission to shoot a horror film in these places, especially the Mission, Stevens concocted a cover story that the film was actually called Religious Leaders of Old Monterey, and showed the script, in Esperanto, but with stage directions and descriptions about monks and farmers. 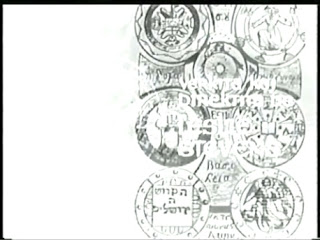 Incubus is one of those films that seem less a work of fiction and more a working. The tableau of gorgeous Nordic succubi summoning noncorporeal entities to the windswept beaches of Big Sur would be potent anywhere, but Stevens would have probably done well to choose another spot to stage it. Why?
Here's why:

Local indigenous tribes-- such as the Essalen-- "told stories of visits of flying people in long robes." To this day, "multicolored clouds" and "ghostlike presences" have been reported around Hunter Liggett. One professor at California Polytechnic says of the Mission, "it has the aura of the paranormal about it. I think there is truth in the ghost stories. It's a very haunted place."

Typical folklore? Maybe. But it turns out that the production may well have had terrible consequences for many of the people involved. Here we see the fabled Curse of Incubus, and it's nothing at all to scoff at:

The Incubus — a lumbering, craggy-faced giant — was played by Milos Milos...(a)t the time, he was dating Barbara Ann Thompson Rooney, Mickey Rooney s estranged fifth wife. In 1966, Milos murdered her, and then shot himself.
In the film, Shatner’s virginal sister...was played by Ann Atmar...(s)he committed suicide a few weeks after the film wrapped up.
A few years (later) the daughter of...Eloise Hardt, was kidnapped from her Los Angeles driveway and murdered.
Even the film’s premiere at the San Francisco Film Festival turned into a disaster. The brand-new print of the film turned out to be missing its soundtrack.
Special guests of that premiere were director Roman Polanski and his date, actress Sharon Tate, who would be killed in the Manson “family” rampage in 1969.

See enough of this kind of thing and you begin to realize magic and the Occult are not a game, and if you get the wrong kind of attention from the wrong kinds of forces, they're going to fuck your shit up.
Only they'll do on their own timetable. 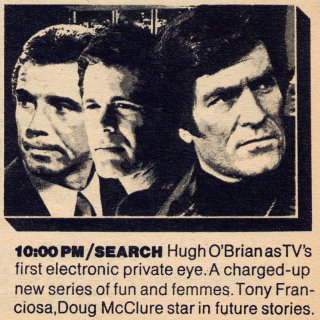 Bringing it all full circle. Stevens then developed Probe AKA Search, a series that dealt with electronic surveillance, computer hackers, a proto-Internet, international conspiracies and the rest of the themes we now take for granted but were extremely futuristic at the time.
Search was very much a forerunner of Jonathan Nolan's Person of Interest series over 30 years later.
Also a forerunner to our onrushing techno-dystopia.