It's well known that Gene Roddenberry had extensive contacts with the Nine as did Jon Povill, who worked on the show Sliders as well as Synchromystic cult fave Total Recall.
But it's less well-known that there were nine major characters in the original cast of Star Trek: The Next Generation, all of whom had direct counterparts in the Egyptian pantheon.
In between the Star Trek TV series and the first Star Trek motion picture, Gene Roddenberry would find himself confronted with a real-world galactic Brotherhood. The ensuing drama would serve to be one of the strangest episodes recorded in the life of major Hollywood figure.

In early 1975, a broke and depressed Roddenberry was approached by a British former race car driver named Sir John Whitmore, who was associated with a strange organization called ‘Lab-9.’ Though unknown to the public, Lab-9 were ostensibly a sort of an independent version of the X-Files, dedicated to the research of paranormal phenomena.
However, Lab-9 had another, more complex agenda- they later claimed to be in contact with a group of extraterrestrials called the ‘Council of Nine’ or simply ‘The Nine’, who had been communicating through ‘channelers’ or psychic mediums.

The Nine claimed to be the creators of mankind, and had informed the channelers that they would be returning to Earth soon. Lab-9 had wanted to hire Roddenberry to write a screenplay based on the Council of Nine’s imminent return. To help Roddenberry in his research, Lab-9 flew him out to their headquarters, located on a large estate in Ossining, NY. There, Roddenberry met and interviewed several psychics, and prepared the groundwork for his script.

Roddenberry wrote a script called the Nine, in which he fictionalized his experiences at Lab-9 and the message for humanity that the Council of Nine wished to convey. But Roddenberry’s story focused more on his fictionalized alter -ego and his marital and financial worries than on the Nine themselves, and Lab-9 requested a rewrite. He handed the task of revising the script to an assistant, Jon Povill.
In his revision, Povill posited that the hit sci-fi TV show that Roddenberry’s alter ego had produced in the 60’s was not actually his work, but had been channeled through him by the Council of Nine. UFO cultists in the 70’s and 80’s would make similar claims about Star Trek itself.

And this was no ragtag bunch of hippie phreaks that Roddenberry was dealing with. The man who set the whole thing up was Andrija Puharich, who was involved in the early career of famed Israeli psychic Uri Geller. Roddenberry biographer Joel Engel noted that Whitmore introduced Roddenberry to several key figures in the British Broadcasting Corp. as well.
It’s interesting to note that at the same time Roddenberry was meeting with all these British TV executives about the Council of Nine, a Star Trek knockoff called Space:1999 premiered on British television. 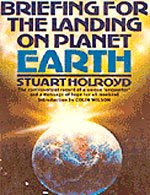 It was later revealed in the 1977 book Briefing for the Landing on Planet Earth that the Nine claimed to be the figures whom the ancient Egyptians had based their Ennead, or pantheon of major gods, on.
Another book of channeled messages from the Nine was published in 1992 and was titled The Only Planet of Choice: Essential Briefings from Deep Space. However, little has been heard from the Nine since that book’s publication. But it is worth noting that a year after it was published, a new Star Trek TV series appeared called Deep Space Nine.

Following the disappointing first film, Paramount had carefully built Star Trek into a major motion picture franchise. So in 1986, Gene Roddenberry was given the opportunity to relaunch the series on TV, this time in syndication. The story went out that the Star Trek creator had been frustrated by the first series, and felt he had to make too many compromises to convention.
This time Star Trek would be done his way. And again, despite Roddenberry’s oft-professed atheism, the series would have even stronger mystical undertones. 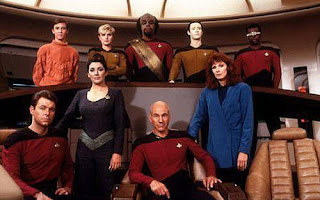 But in Star Trek: The Next Generation, Roddenberry and his team would take the opportunity their own Ennead with the new characters, this one based more in the later Greco-Egyptian pantheon than the primeval gods of the Ogdoad and Ennead.
Working with a rotating team of writers (at least two of them would challenge Roddenberry’s claim to exclusive authorship in court) , Roddenberry’s choices seem to reflect a great deal of deliberation as to assignation of identity and signifiers to indicate each particular deity.

• The new captain was intentionally designed as Roddenberry’s fantasy version of himself. The Star Trek creator wrote that Jean Luc Picard “is an older man, thoughtful, compassionate, hard but fair - and very irresistible to women.”
Picard would be played by Patrick Stewart, no stranger to ritual drama himself, having already played in two separate Sun King films, Dune and Excalibur. Jean-Luc Picard would be the father-god Osiris, Zeus, Odin, Yahweh, or what have you.

Perhaps in honor of Solar martyr Julian the Apostate, Roddenberry had originally named his captain ‘Julien Picard.’ But a consultant later recommended ‘Jean Luc’ from a list of possible replacements. It was interesting choice. ‘Jean Luc’ translates into ‘John the Light’, perhaps a reference to the fact that the many Templar-derived organizations hold John the Baptist in particularly high esteem.

• Picard’s Isis would be Dr. Beverly Crusher (Gates McFadden), a flame-haired Magdalene-type and the unrequited object of Picard’s affections. Like Isis, Beverly is also a widow and has a young son. 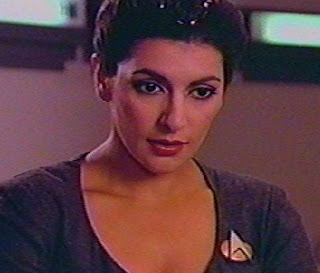 • Ryker’s Hathor would be Deanna Troi (Mirina Sirtis), the clairvoyant ships counselor. Deanna Troi’s name identifies her with the Moon goddess. Diana, goddess of the hunt, was identified with the Moon, and Troy was the city of Apollo, brother of Selene, the Moon goddess.
In his original treatment, Roddenberry wrote that Troi’s alien race, the Betazoids, were said to “engage in almost constant sexual activity.”

• Acting as their Harpocrates would be young Wesley Crusher (Will Wheaton), who would often be the Enterprise’s savior, much to the consternation of many a Trekker. He even physically resembled a younger version of the “Horus the Elder” figure of Ryker.

• The guardian role of the dog-headed god Anubis would be played by the Klingon strongman Lt. Worf (Michael Dorn). Roddenberry was even kind enough to name him after a dog’s bark.

• Acting as the Thoth/Hermes messenger-cum-scribe of the Enterprise is the aptly-named android Data (Brent Spiner).

• And acting as the ship’s protective Sekhmet, or Athena, would be the security chief Natasha Yar (Denise Crosby).

• Rounding out ST:TNG’s starring cast was Geordie La Forge, the Enterprise’s Ptah. Or Hephaestus, in the Greek. Or Vulcan in the Roman, if you like. He is the craftsman, the engineer, the maker, the builder.

That’s nine major characters introduced in the first episode of ST:TNG, a “Council of Nine” if you will. And exactly like the fabled Council of Nine, the cast of ST:TNG all have corresponding deities in the Egyptian pantheon .

Now ask yourself- how deeply did Gene Roddenberry’s involvement with Lab-9 go? We have the cast of his new Star Trek series seemingly modeled on an Egyptian Ennead exactly as the Nine claimed to be, and another series that seems to make direct reference to the "Nine from Deep Space." Awfully strange coincidence there, wouldn’t you say?
------------------------------