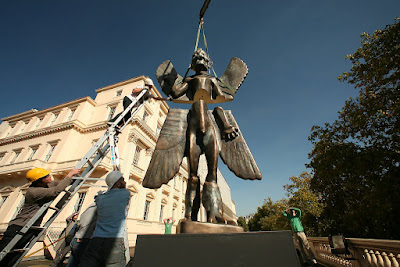 The term daimon originally referred to a spirit that was both protector and bringer of knowledge.
The Romans called the daimones genii, the root of the term genius. You've probably heard that if someone was particularly gifted a Roman would say she had a genius, not that she was a genius
Church fathers like Augustine of Hippo dismissed the distinctions pagans made between good daemons (eudemons) and bad ones (kakodemons), though the idea of heavenly angels and fallen angels already existed as a corollary (particularly in the Book of Enoch).
But Augustine in particular was deeply influenced by the stark, simplistic dualism of Manichaeism, the Mesopotamian Gnostic faith he held before his conversion. Splitting hairs just wasn't his style.

Another Apeulius quote by Augustine may just shed an important light on all the information we've just covered here:

The same Apuleius, when speaking concerning the manners of demons, said that they are agitated with the same perturbations of mind as men; that they are provoked by injuries, propitiated by services and by gifts, rejoice in honors, are delighted with a variety of sacred rites†, and are annoyed if any of them be neglected.

Among other things, he also says that on them depend the divinations of augurs, soothsayers, and prophets, and the revelations of dreams, and that from them also are the miracles of the magicians. 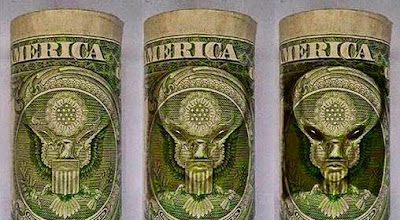 ON THE PLAINS OF SAN AGUSTIN

There are those who believe the Roswell event was real but don't believe it had anything to do with extraterrestrials from another star. The so-called "Collins Elite," the alleged secret society within the Department of Defense, have an entirely novel take on the crash:

Beyond any shadow of doubt at all, the strangest belief of the Collins Elite was that relative to the Roswell affair of July 1947. In what is certainly a unique fashion, they came to believe that nothing - extraterrestrial or otherwise - crashed at Roswell.

Rather, the group concluded that the event was "staged" - a "Trojan Horse"-type event provoked by demons trying to deceive us into accepting the idea that vulnerable ETs had crashed at Roswell, and were responsible for the wave of Flying Saucer encounters that gripped the nation in the summer of 1947. 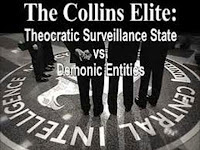 For the Collins Elite, the "alien debris" and "memory metal" said to have been recovered at the crash site on the Foster Ranch, New Mexico (which is shown above, in a photo I took in February 2011), were nothing less than the result of diabolical "demonic alchemy."

In other words, the group formed an opinion that these strange entities "weaved" the materials, then had them manifest on the Foster Ranch, thus creating the image of a crash of something exotic from the skies.

But, what of the bodies said to have been found at the site? Well, the Collins Elite had an answer to that issue too.

Their members claimed to have read reports suggesting that no literal bodies were ever found at Roswell - at all. Rather, they maintained that certain "biological materials" were recovered. 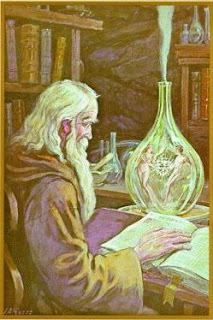 Although comparisons have been to the Golems of Jewish folklore, what this all sounds like are variations on the homunculi, the artificial beings created in the Alchemical legends. See if a couple of names pop out at you here:


The guests thereupon ascended to the sixth floor, where stood a small altar resembling that in the King's throne room. The bird drank from the little fountain and was fed with the blood of the white serpent which crawled through the openings in the skull. The sphere by the altar revolved continuously.

The watch struck one, two, and then three, at which time the bird, laying its neck upon the book, suffered itself to be decapitated. Its body was burned to ashes, which were placed in a box of cypress wood.

Virgo Lucifera told C.R.C. and three of his comrades that they were lazy and sluggish "labourators" and would therefore be excluded from the seventh room.

C.R.C. and his three friends were set to work moistening the bird's ashes with specially prepared water until the mixture became of doughlike consistency, after which it was heated and molded into two miniature forms.

Later these were opened, disclosing two bright and almost transparent human images about four inches high (homunculi), one male and the other female.

These tiny forms were laid upon satin cushions and fed drop by drop with the blood of the bird until they grew to normal size and of great beauty. Though the bodies had the consistency of flesh, they showed no signs of life, for the soul was not in them.

The bodies were next surrounded with torches and their faces covered with silk. Virgo Lucifera then appeared, bearing two curious white garments.

-- The Chemical Marriage of Christian Rosencreutz, as quoted in The Secret Teachings of All Ages by Manly Palmer Hall

This of course was the foundational text for the Rosicrucians, who of course would later be identified with the rose and cross.
Or should I say the Roswell-icrucians?
What if we truly are dealing with another type of beings from another type of reality, who can interface with our minds, but not our bodies? What if they need us to build domiciles and vessels for them to inhabit in this reality?
This is what former Equerry to Queen Elizabeth and Prince Philip, Wing Commander Sir Peter Horsley - a guy who was as high up in the power pyramid as a military man can get - had to say about that:

"Suppose we are actually living in a multi-dimensional time track with the same space, including a young primeval world, our own and a much older world with advanced technology, all ageing and developing side by side, conscious and sometimes stirred by the presence of the others - strange ships in the sky, images of ancient creatures, the imprudent antics of poltergeists and strange noises like the creaking of bedsprings from an empty room.

"These time tracks spin around like separate grooves of a gramophone record, each playing a different score until given a sudden jolt when the needle jumps a track, imposing for a very short period an unintelligible tune upon its neighbour before being returned to its own groove again."