Liber ALeister & the Aeon of Crowley 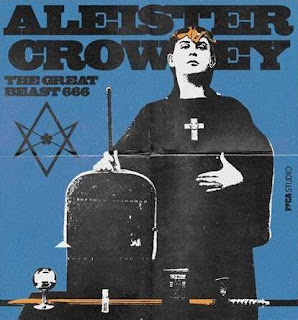 Nietzsche once said, "All great things must first wear a terrifying and monstrous mask, in order to inscribe themselves on the hearts of humanity."

Surely he must have been prophesying the rise, fall, and remarkable afterlife of one Edward Alexander Crowley, aka Greast Beast 666, aka Creepy Ol' Uncle Aleister.

For a man who died alone and forgotten, the Great Beast's shadow in death has been nothing short of long. In fact, Crowley's restless ghost seems to haunt the dark corners of the Information Superhighway, a tabula rasa on which to project the fears, needs and lusts of an age of uncertainty and decay. He's become his own archetype.

Who he was depends on who you ask. For some, he's a bitchin' t-shirt design. For others, he's an all-purpose boogieman. For aspiring magi, he's a spectral mentor, there to guide them through the dark jungles of the black arts (albeit one given to occasionally shoving them into the quicksand for a laugh).

To some students of occult history, he was a showboat and a grifter, with barely-disguised sociopathic tendencies. A man for all seasons, in other words. But who was this man? What exactly did he do to earn his fearsome reputation?

In a century filled with mass murderers, mad scientists, and pompadoured witch doctors, Crowley seems like very weak tea indeed, with his cosplay and his rituals and his buggery and his drugs. But somehow he's struck a chord in the Collective Unconscious, like an eternal embodiment of the collective Id, struggling for slack in the tightening noose of the new world order.