"The Women for Whom the Watchers Fell Shall Become Sirens..." 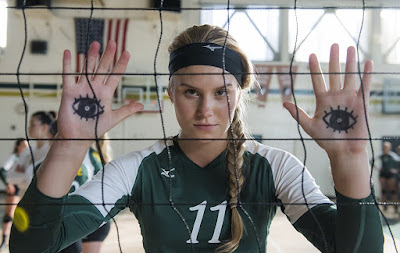 "It never ends" isn't some nifty little tagline I cooked up for dramatic effect. It's a blunt, objective statement of fact.

Case in point: an anonymous reader chimed in on the previous thread and dropped such a depth-charge on my humble little exegesis that I'm still feeling a bit woozy.

All of a sudden all kinds of dots previously floating around in the Ether have connected, logged into the quantum mainframe, and kicked this whole saga into a much higher gear...

What could this revelation from on-high possibly be?

Well, it's a passage from the First Book of Enoch in which we discover the fate of the wives of the Fallen Angels once their baby-daddies had been cast into the Abysmal pokey:

CHAPTER XIX. 1. And Uriel said to me: "Here shall stand the angels who have connected themselves with women, and their spirits assuming many different forms are defiling mankind and shall lead them astray into sacrificing to demons, (here shall they stand,) till the great judgement in which they shall be judged till they are made an end of.

"And the women also of the angels who went astray shall become sirens."

So for those of you playing at home we have here the winning trifecta: "Heaven or Las Vegas" (the War in Heaven), "Pearly Dewdrops' Drop" (the Fall of the Watchers from Heaven) and "Song to the Siren."

I think it's safe to say that Archangel Uriel is the Secret Sun Scrabble grand master of all time. What's more, I've heard tell he's got quite a thing for Orange.

How could I have missed this before? Well, I'm glad you asked.

I missed it because more recent translations of Enoch revise the text and translate "Siren" as "peaceful." Yeah, it doesn't make a lick of sense but that's present-day academia for you, innit?


In the Greek Septuagint the Greek word σειρηνας (sirens) does in fact appear several times where the Hebrew has the phrase בת יענה.

There is debate as to what this phrase means, some arguing that it refers to a female owl and others a female ostrich.  The word  יענה always appear with the prefix בת (literally “daughter of”).

I'm going to go way out on a limb here and guess the ostrich thing is nonsense and the owl translation is correct, in light of the specific milieu in which the Book of Enoch emerged. Here's some clues for you to gnaw on, from the Zohar:


Said Rabbi Hiya: "What signify the words 'And the sister of Tubal Cain was Naamah' (gentleness), and wherefore was this name given her? Was it to indicate that she possessed the power of seducing both human and angelic beings?"

Said Rabbi Isaac: "She overcame Aza and Azael who in scripture are called 'sons of God.'"

Said Rabbi Abba: "Seeing that demons and elementals are subject to death, wherefore do Naamah and Lilith continue to exist through the ages?"

Rabbi Simeon replied: "All demons and elementaries do indeed die, but Naamah and Lilith together with Agereth, daughter of Mahlath their offspring, abide in the world until the day that the Holy One will banish and drive all evil and impure spirits out of the world... 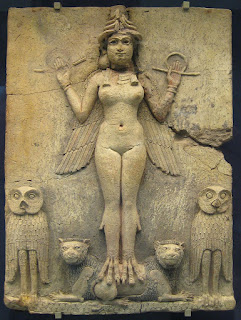 Seeing as how Naamah and Lilith seem to be interchangeable and that Naamah sounds suspiciously close to an Aramaic transliteration of the Sumerian Inanna (Sumerian still spoken as a sacred language during the time of Enoch's writing),  I'm going to stick with the "owl" interpretation. Back to the Zohar:


Observe that Naamah being the exciter of human concupiscence and carnality, it is obligatory on everyone to practice and perform acts and rites of purification, so that he may become and preserve himself pure and undefiled."

Yep, sounds like Inanna to me. Which makes perfect sense.

Why? Well, because in the hothouse of pre-Millennial Babylon, the lines of demarcation between the various competing religions--and religion and magic-- were theoretical at best. Everyone was borrowing from everyone else.
As late as the seventh century CE you had Jewish magicians calling on ostensibly-forgotten Sumerian gods like Gibil to give their curses a little extra oomph.

What's more, Naamah was closely associated with both music and prophecy. And since the Inanna archetype had more or less evolved into the Syrian (Sirenian?) Goddess at the time of Enoch's writing, it makes sense that Inanna's aspects would be transferred to this Naamah mermaid-figure:


'Naamah,' 'pleasant,' is explained as meaning that 'the demoness sang pleasant songs to idols.' 'Zmargad' suggests 'smaragdos,' the semi-precious aquamarine; and may therefore be her submarine dwelling.  "Hebrew Myths" by Robert Graves and Raphael Patai

"Naamah was so skilful in matters of divine revelation, that he (Lamech) knew he was to be punished for Cain's murder of his brother." - Josephus

Do note Naamah's "submarine dwelling" and her possible association to aquamarine beryl, particularly in light of the precious stones cited in "Pearly Dewdrops' Drops"; rubies, pearls, almandine, and rooster eye, which is an Arabic term for stone bead.

But since it absolutely, positively never, ever ends, I think I might have stumbled on another clue embedded into "rooster eye on my star/ to rip asunder what he saw." Oh, I know--a lot of you are several steps ahead of me here.... 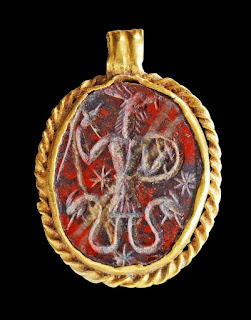 ...and yes, we're talking about Abraxas.

The depiction of a man, specifically Mars, on a piece of Jasper with a shield in his left hand and an idol or weapon in his right, with vipers as his feet and a cock or lion as his head, wearing a breastplate, enables its owner to battle his enemies and obtain victory. It also protects him from poison. This is the depiction on the sacred Abrasax stone.

Now, please bear in mind that Our Lady (Queen Dowager of Sibyls) wrote "Pearly Dewdrops' Drop" when she was barely out of her teens. 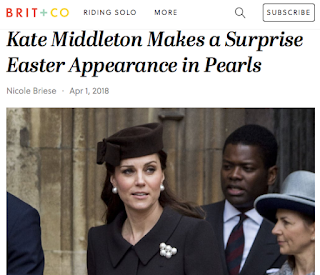 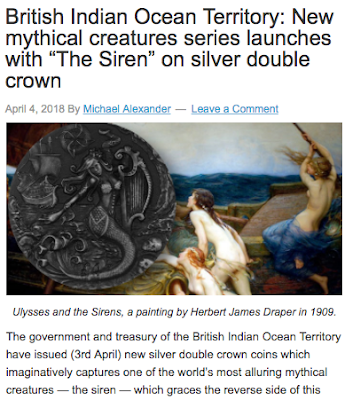 Right on schedule, British Indian Ocean Territory (BIOT) has released a Siren coin on a double (or Twin) crown coin with Queen Elizardbeast II on the face.

The coin is quite a semiotic goodie-bag. Our Gordon seems to think its got some dark magic in mind but you can judge for yourself...

The coin is silver but it's been stained black, so it's not surprising we see a stylized swastika atop a compass, perhaps dropping some of that ever-popular Black Sun iconography on us.

Then you got two -- or Twin-- skulls sitting down there in Davy Jones' locker.

And of course, the Siren has her Lyre, with four little dashes in the corresponding position of Vega. A reference to the All-Important 44? You tell me. 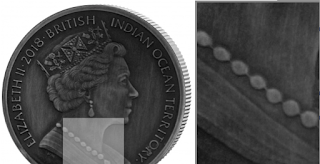 On the obverse we see Lizzie has her Pearls and dropped pearl earrings.

Oddly enough, this double crown is faintly reminiscent of the British penny, better known 'round these parts as the "lucky-lucky penny-penny that binds the Pearly to their souls." 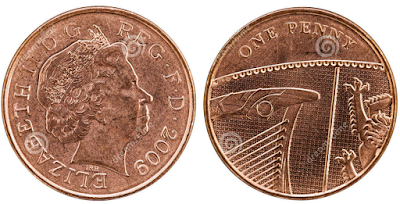 As we saw, that lucky penny encodes both Vega and Regulus. 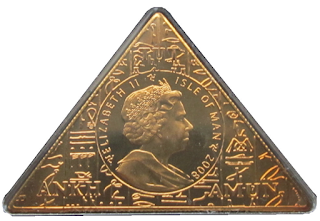 The mint in question has done some, um, interesting work in the past, including the Isle of Man pyramid coin....

...which has an interesting design on the reverse... 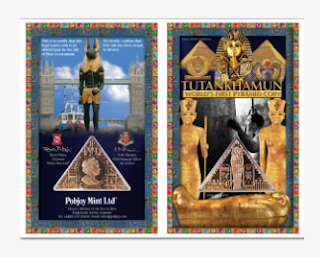 ...and some interesting packaging.

British Indian Ocean Territory is a funny old place to be issuing coins, though... 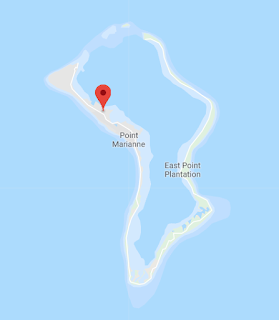 ...seeing as how there's absolutely nothing there.

Well, almost absolutely nothing. Maybe some tophets, I don't know. Never been. 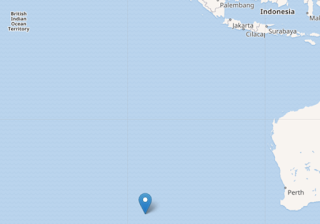 BIOT is in an interesting neighborhood, though. Not much around but the suspected crash site of MH370 (which was in the news recently, thanks to those weird coded voicemails).

Ironically, the suspected crash site is roughly parallel with Heath Ledger's hometown Perth, which recently saw a week-long series of invocations of the Sirens.

Those began the very same time Cyclone Gita formed on the far side of Oz and ripped asunder what she saw in the South Pacific. 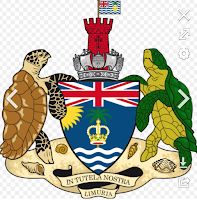 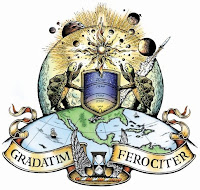 Do note that British Indian Ocean Territory- again, little more than a glorified sandbar-- has a coat of arms. Which is oddly similar to (private space program) Blue Origin's coat of arms. 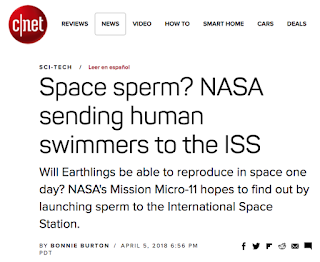 And right on schedule, rose the Pearly dew-drops to ISiS.

Would you expect anything less? Space is an altar. H/T to supersleuth RL.

While you breathlessly wait for me to brew up the next batch of crazy-broth, be sure to check Gordon and I setting the record straight on X-Files Season 11.