Prometheus: "A Half-Billion Miles from Earth..." 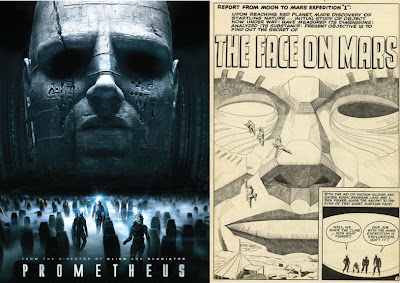 In 1960, the powerful Washington think tank The Brookings Institute released a white paper which included a section on UFOs and ETs, outlining a number of various scenarios for poltical and military leaders should contact ever occur.
Brookings was pessimistic about such an event, noting that societies don't tend to react favorably when confronted with a superior technological advancement.
Given what we now know about the vast distances between stars and the limitations of space travel, chances are good- in my opinion, at least- that any contact we might have might be with something much more exotic than interstellar neighbors, perhaps even some kind of interdimensional contact (given the energy requirements involved, traversing between dimensions from a fixed point might well be more feasible than drifting through several light years of space). 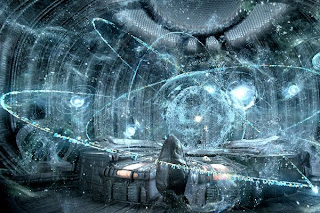 But Brookings felt that the more likely possibility was discovery of an earlier civilization within our own solar system, either native or transient:

While face-to-face meetings with it will. not occur within the next twenty years (unless its technology is more advanced than ours, qualifying it to visit earth), artifacts left at some point in time by these life forms might possibly be discovered through our space activities on the Moon, Mars, or Venus.

This was the basis of 2001: A Space Odyssey, in which the discovery of an alien artifact leads to a coverup. That in turn was inspired by Arthur C. Clarke's short story 'The Sentinel', one of several stories working that theme.
Some researchers have speculated that these artifacts have indeed already been found (on Cydonia, for instance) and what we've been seeing over the past 30+ years is a two-pronged approach to preparing the public for disclosure of an otherworldly civilization; relentless ridicule by scientists and the media accompanied by a steady diet of ancient astronaut/alien themes in films, TV shows, video games and so on.

For my part, I'd say it was unlikely that the authorities would ever want to disclose anything that disturbs our present understanding of history.
But I'm not married to that. And there was Ridley Scott's relentlessly hyped Prometheus, wasn't there? Now there was a stray line in Prometheus, utter by Charlize Theron's character- one that got the nipples of twiddleheads like Phil Plait and Neil De Grasse Tyson in a right old twist- that led me to wonder this afternoon if it weren't a gross computational error (these films pay scientific consultants big dollars to catch these kinds of things) but a clue as to what the film is really all about. A clue that we can draw a line from it, to the NASA-sponsored Mission to Mars, back to 2001.
It's when she mentions being a "half-billion miles away from Earth." As Tyson mentioned, that would put the mission somewhere in the vicinity of Jupiter. I don't expect Tyson or the rest to understand secret code or hidden messages, but certainly all of you out there do.
And pray tell- what famous alien contact narrative took place outside the orbit of Jupiter? 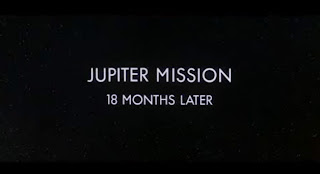 Oh, that one. Right. What's even more interesting to me is how similar so much of what we see in Prometheus is to Mission to Mars, certainly a film that most Hollywood producers wouldn't seek to emulate.
Of course, it's all told in the context of a horror story, but the elements of the holographic history lessons and the 3D space map are all there, quite incongruously.
Then of course there's also the giant alien sending its DNA to Earth, which we see in the beginning of Prometheus. Now, most scientists believe that Mars' magnetic field was destroyed half a billion years ago, due to an asteroid impact. Is that another clue? A double entendre to what critics dismiss as a gross error? We'll get to that in a minute... 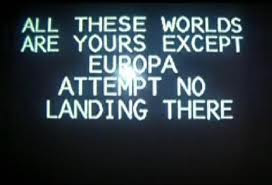 Given that the action in the film takes place in a giant space ship underneath the surface of a moon, I can't help but think of the search for life on Jovian moons such as Europa, which played such a crucial role in 2010: Odyssey Two. And that story climaxed with the ignition of Jupiter† as a new sun,
Lucifer, which is not a name (and appears in no Bible translation at all until the King James Version) but a title meaning the "Light-Bringer," which is what role Prometheus the Titan played in Greek mythology, having stolen fire from the gods to bring to humanity. I was thinking about those Martian giants today in context of the final scene in Prometheus when Mary Magdalene and John the Bapti...er, Elizabeth and David take off for the Engineer's homeworld.
Of course, all this interstellar travel would take decades, if not centuries, in the real world so you can't help but wonder what planet they're steaming towards in the decoded version. A lot of people have dismissed Zechariah Sitchin's Nibiru theories- and the man was no astrophysicist- claiming the impossibility of life on such a far-flung planet. Plus, it doesn't even exist anyway, so there.
But we keep hearing stories of something out there- and it's a good light year or so to the edge of the solar system, and there are theories of brown dwarfs and moons and the rest.
One thing you can be sure of with science is that we know now is almost certainly going to be rewritten later. 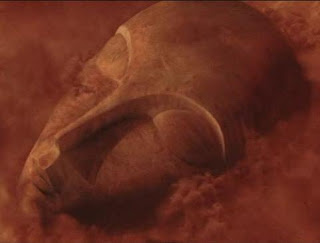 But I couldn't help but think again that a truly advanced race- say, a race of former Martians who saw their beautiful paradise of a world blown to shit by some passing spacejunk- might take very seriously the danger of our cosmic neighborhood and realize that longterm survival meant getting the hell out of the way of the Sun's gravity, which is always dragging all that dangerous crap towards it.

We can't imagine a truly advanced race, past a sci-fi level. But a truly advanced race might see the past couple of thousand years since historians were recording them bounding around the Earth's surface a friggin' blip in their concept of time.
And given that the so-called Face (with all its symmetry and right angles) is about a mile long, they probably wouldn't have our concept of space, either. And funny how NASA spends all its time excoriating Face theorists and the like but has no problem underwriting a film about it. 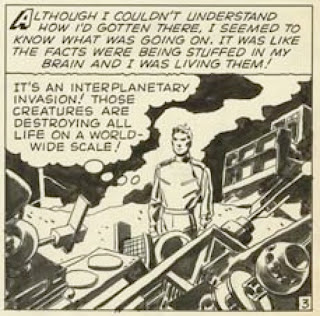 And, of course, the promo art for Prometheus also features a face, one remarkably similar to Jack Kirby's 1958 'Face on Mars'*. That story too featured a holographic history lesson about giants and planetary destruction, and it's a very good bet that Kubrick and Clarke read the comic while working on their film.
In light of all of these connections, I think there's a very good chance indeed that that "half a billion miles" wasn't some gross error, but was in fact a wink and a nod pertaining to Jupiter. I can't help but think of Robert Temple's offhand remark some time ago that the merpeople (or Nommo) of the Dogon religion were out there in hibernation around one of the gas giants. Are there specific people to whom that "error" was a wink and a nod?
There seem to be an awful lot of people in Hollywood who are interested in AAT, including many of the biggest names behind the camera. What do they know and how do they know it?

PAPERBACK
KINDLE
*For some reason I just put together the fact that the inker on the story (the artist who created the finished art from Kirby's pencil drawings) was Al Williamson, who was my Narrative Art teacher at The Joe Kubert School, which was my first class on Monday mornings. I remembered this after thinking back on Joe, who died this summer (as did the brother of the director of Prometheus). † Cheers to Liz for the correction. I obviously had the Brotherhood of Saturn weighing heavily on my mind while writing this...
at September 09, 2012