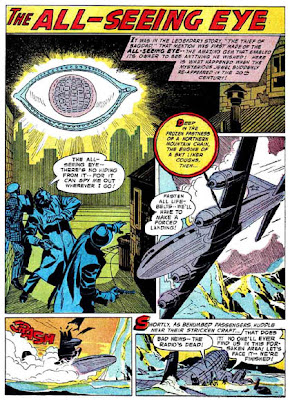 Synchronicity is a wonderful and powerful thing. If you work with it, it works with you.
Working with Synchronicity requires a high degree of rigor and discernment, of separating the big fish from the guppies. But eventually you will reach a genuine shift in consciousness- you will realize that mind is not brain, as Jeff Kripal says, and that there are forces at work that utterly mock our reductionist models of consensus reality.
The most powerful synchronicities in my life are mine alone. Explaining them is usually difficult, often impossible. It took me a long time to separate signal from noise, genuine sync from simple coincidence (which is often fun, but not nearly as utilitarian). So I don't bother trying to explain them to the uninitiated. And I really recommend that you do the same.
Rigorous analysis gives you all the confidence you need; you don't have to seek validation from other sources. Synchronicity often comes in waves, often tied to astrological influence for some unknown reason. It sounds rather counterintuitive but I notice syncs will heat up during MercRet phases.
I don't know that much about Astrology per se- which is to say I tend to stumble around a lot and pay attention only to major trends or when a number of astrologers agree (which most of them don't) on a certain phase. But I do very much agree with Jung's appraisal that Astrology is linked closely to Synchronicity.
That the planets themselves are not necessarily influencing us but the subtle, repeating rhythms of nature can be marked by their movements, much like ancient navigators used the stars to chart their way. 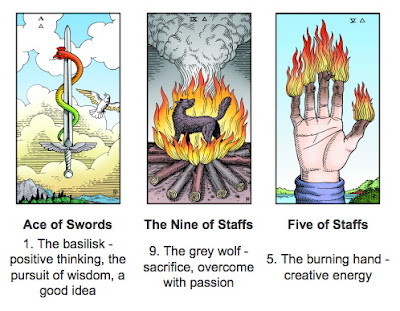 I use Synchronicity the same way. Recently I've been experimenting with The Alchemical Tarot (I'm as much a bumbler with the Tarot as I am with Astrology) as a synchronistic tool and finding remarkable-- nearly impossible-- patterns emerge.
Cards repeatedly showing in spreads, seemingly beyond random probability, and in combinations that seem not to describe the future, but the god-damned morass I've been plumbing through (the same damn sword cards keep popping up) lately. In other words, using it for diagnostic means and not prophetic ones. That to me seems to fall under the same influences that govern Synchronicity.
A several key points in my life Synchronicity has popped up and helped me make difficult decisions that only in hindsight seem inevitable. I found that that by narrowing my focus and not hunting for correspondences, they'll come to you.
I also came to realize that Synchronicity isn't always pleasant-- it can upset you, and force you out of comfortable ruts, just like what happened one sunny Tuesday morning eleven Septembers ago when I thought I was on top of the world. All that being said, the sync I've been mulling over recently is pretty minor in the grand scheme of things (and not nearly as gratifying as the Rev. Moon death sync). In and of itself, that is.
The day after I had poured out my disgust over the Olympic scaremongering (and profit-driven fearporn in general), I got my copy of The Jack Kirby Omnibus Vol 1. This was a typical sync in that I ordered it off Ebay (and got it for an amazing price, thank you very much) but the tracking information had gone blank and I had no idea where it was in transit. It arrived Saturday morning (less than 24 hours after the Olympic post) and I made a delightful discovery-- there was a story in there that I had never seen. 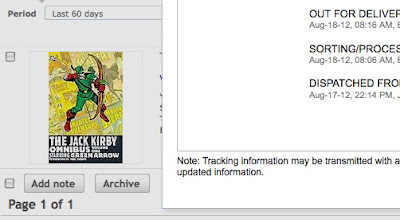 In fact, it was a story I hadn't heard of before (this is a period in Kirby's career fans generally ignore). It's called 'The All-Seeing Eye' and is a rather startling little tale about a journalist who is entrusted with an ancient artifact (the eye of the title) which allows him to, well, remote view. The writer uses it to break stories and report crimes to the cops. But a gang of clever thieves catch on to the Eye and try to steal it from him to help in their scams.
After their plan is foiled the newspaperman, being an honest fellow, decides that the Eye is too powerful to be allowed to fall into the hands of crooks or worse, so he hitches a ride out into the ocean and drops the Eye in the drink.
The story is not a world-beater but it tied right into what animated my post the night before- how crooks and thieves are misusing symbology (All-Seeing Eye spotting is like a religion to these types) to whip up fear and rake in profits. 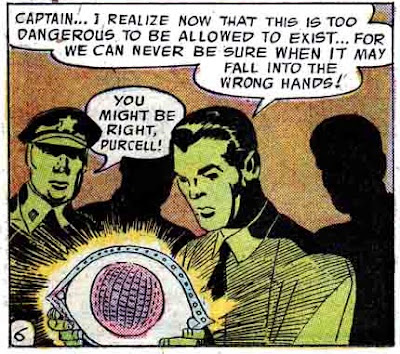 The story helped put the capper on my cryptosemiotic work- at least publicly. I realize that I don't want to do anything more to feed this madness, even though my interest- my obsession- over the past few years largely became centered on ignoring all the secret society flooferoo and trying to glean what these symbols originally meant.
But there are too many people walking on the edge of the volcano out there and when they fall they usually take innocent people with them. I don't ever want that on my conscience.
I did cryptosemiotic work via email for years before launching this blog. But that was before I realized how empty and meaningless-- not to mention utterly garbled-- most of the symbolism you see out there is and what a near-total waste of time it is looking for it. I realize that now. Fun for email, message boards, FB groups? Sure. Worth much more than that? Absolutely not. 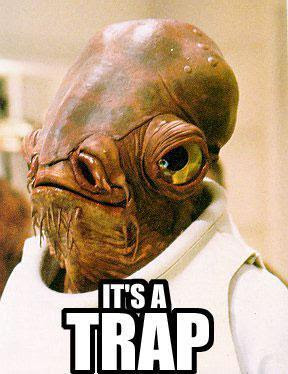 I can say with utter confidence now that it doesn't ever go anywhere but in endless circles, and my creeping suspicion over the past couple of years that it was all being put out there to divert people from real issues is now a bedrock conviction.
The utter economic devastation we see all across the world proves once and for all what the real issues were and are, and in a better world the people who wasted our time chasing phantoms- or wasting a second worrying about Lady Gaga- would face real consequences for their actions.
Which is not to say there isn't value in cryptosemiotics- there very much is. But it's kind of like a chainsaw or a gun- it can do a lot of damage in the wrong hands. And at this point, that's mostly what it's in.
But bringing it back to the beginning here, Syncs tend to cluster around potent symbols, so it's well worth your time to familiarize yourself with them. But I would recommend that you stop worrying about things you will never have any control over and learn what symbols tend to recur through your own life.
In that, a serious study of cryptosemiotics is useful as it gets. After a while, you'll lose that narcisstic paranoia and get down to reverse-engineering the hidden architecture of reality as it exists in your own psychic neighborhood.
I finally understand the obsession with secrecy and so on with some of these old esoteric groups. They understood how the stupid and venal tend to shit not only their own beds but everyone else's if they think there's a buck to be made.
But at the same time secrecy has a distorting effect and can lead to its own kind of sins, sins that can ultimately consume the host. History is filled with esoteric rebels who became exoteric dictators. For now, you just have to get used to the fact that if you choose to hack the reality-consensus mainframe, you're going to arouse opposition among the simpletons, whether the materialist/reductionist Left or the witch-hunting/cryptofascist Right. Them's the breaks.
But I think the best approach for the time being is openness and honesty, as well as a pure heart and an open eye.
UPDATE: Speaking of syncs and such, I can't believe I forget to mention this one- the fam and I took a few days to drive up to my old stomping grounds of Innsmouth and Arkham (that's 'Gloucester' and 'Salem' for the civilians) and had a lovely time.
We capped it all off with a delicious meal on the patio of the local Chinese restaurant, which gave us a great view of the streetlife (dogs- lots of dogs). At the end of the meal the waitress brought the bill and the cookies. At first I pushed aside mine but then I thought where else could I possibly get an effective fortune than in Witch City, USA (in the shadow of Samantha Stevens, no less)?

This certainly fit the bill, right down to a T. Doubly so given the immediate view to my left. Gave me a ray of light in what have been some dark days lately...