There Goes the Sun


Well, it's quite brisk around these parts, my friends. I find it rather invigorating with the sun shining, somewhat less so when it's overcast. And if the trend-lines hold I'll probably have adjusted my opinions rather considerably in a few weeks or so.

I'm talking about the Mr. Burns-worthy evil-but-also-moronic schemes to block out the sun by cloaking the skies in aluminum chemtrails. Yes, Virginia, geoengineering is real and is out in the open now.

Will the clueless stenographers in the press admit they were wrong--if not outright lying sacks of shit-- and that the people who actually took the time to study the phenomenon were right all along?

LOL jk. They may be stupid but they're not suicidal. 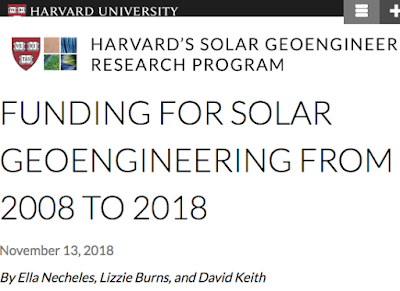 You have to love the mindset of a David Keith-- spraying the world with aluminum particulates is a great idea because A., it's cheap, and B., therefore he and his cronies will get to roll around in ever-larger piles of tax dollars.

Never mind the litany of serious health hazards aerosolized aluminum will pose to, y'know, all life on Earth.

The project leader on the Bond-villain boondoggle freely admits that this program will kill tens of thousands of people every year, but hey- what are few hundred-thousand people when hundreds of billions of grant dollars are at stake? Roll out the barrel (of aerosolized heavy metal contaminants)! We'll have a barrel of fun! 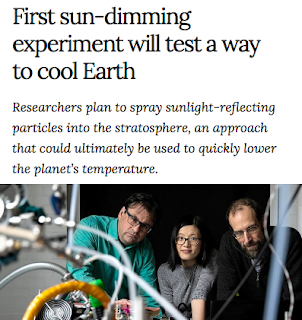 So now we see what this climate change stuff has really been about all along and how, yet again, the prophetic powers of The Simpsons continue to produce major hits. Make of that what you will. 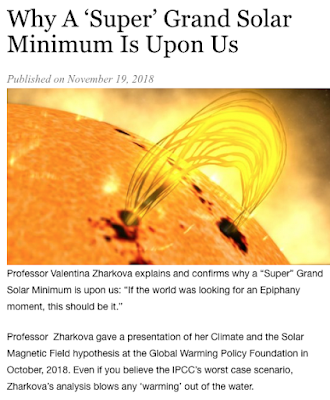 But given the potential TRILLIONS at stake in keeping the ol' Global Warming Climate Change gravy train rolling, I am cosmically certain that Doctor Silvana David Keith won't be all that troubled if global temperatures crash, assuming there really is something to these new solar-minimum models.

In fact, if the "ever-shifting goalpost" model of the climate change church holds true, I am cosmically certain that Keith and his cronies will argue that the inevitable Saharan and Amazonian mega-blizzards are proof that the globe is rapidly warming and we need to pump even more deadly metal dust into the skies. 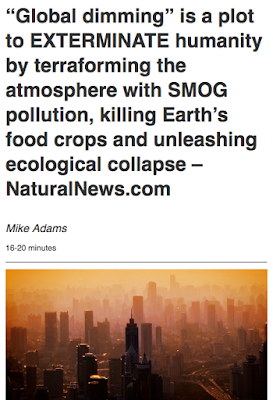 Mike Adams at Natural News believes this is all part of a program to exterminate the human race. I don't where the programmers would decamp to to sit all this out, but Adams seems to argue that maybe the real programmers aren't Harvard and their ilk, but other parties altogether. 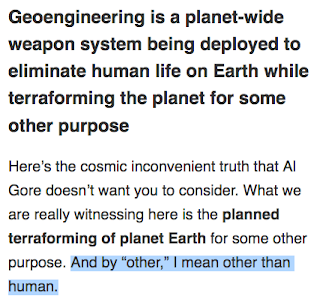 Well, there you have it.

Now I know Adams can get pretty radical (and I admit I don't really spend that much time on his site) but I sure didn't expect these kinds of speculations from him. It kind of reminds me of the old Charlie Sheen movie The Arrival (not to be confused with the more-recent Arrival), in which aliens are terraforming the planet to make it more amenable to their requirements and such.

Me, I'm more given to considering the stultifying levels of corruption, greed and myopia of establishment science than I am to explanations of colonizing aliens trying to freeze us all to death.

But then again, I think a New Wave diva from the 1980s is a bonafide prophetess. So again, factor that into your calculus. 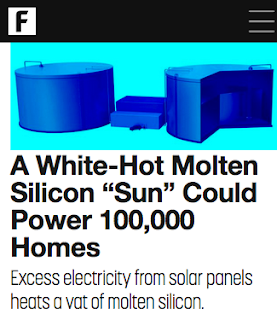 And since the only reason that institutions like Harvard (and by this point, the entire university system) exist at all is to cement and bolster totalizing elite hegemony, I guess we shouldn't be surprised that at the exact same time geoengineering came out of the devil's closet, that two other MIC hives have offered the reaction/solution to the catastrophe Keith and his cabal will inevitably create. 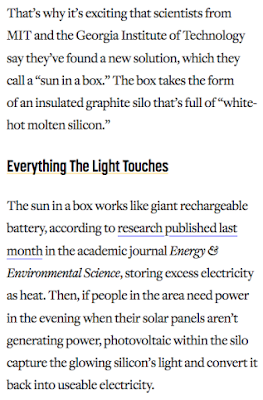 I guess this is somehow related to the artificial sun schemes we've heard coming out of China, but I'm too lazy to look into any of this in any real depth. But sync-wise, I am indeed struck by the silicon basis of this technology.

All the more so given reports that the former home of Dr. John Lilly-- whose dark prophecies of a hostile, silicon-based colonizing force get harder to scoff at by the day-- was destroyed in the recent wildfires. Your mileage may vary.

But, hey- we have major multinationals declaring that human beings have no right to water. Why should we mooch that delicious, life-giving sun for free? 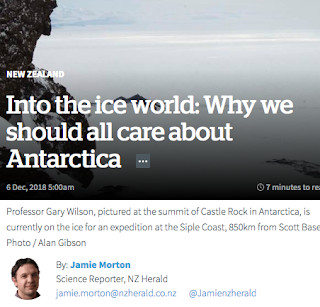 Concurrent with the sudden onset of Arctic weather across this great land of ours are a spate of stories centering on the Down Under.

For entirely understandable reasons, the folks in Oz and New Zealand seem especially interested in the frozen continent. But my synchy-sense is informing me there's a lot more to it besides. Especially 'round those parts.

It's either my synchy-sense or those alien signals my tooth fillings seem to pick up in the wee hours of the morning. That is, the signals that don't scream "Kill! Kill! Kill!" at my brain.

I mean the other ones. 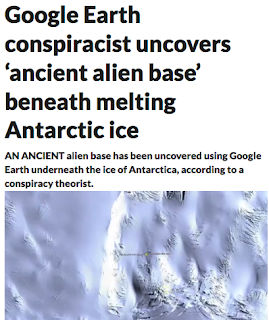 And given the deluge of these types of stories in the press, I am entirely confident it has nothing to do with aliens or Nazis or Agartha or whatever. At least not aliens as they are commonly understood.

I think I need a new Knowles' Law to quantify all of this. Something like when the Mockingbird minions start talking about aliens, it's guaranteed to have nothing even remotely to do with aliens.

I'm still working on that one. I'll get back to you. 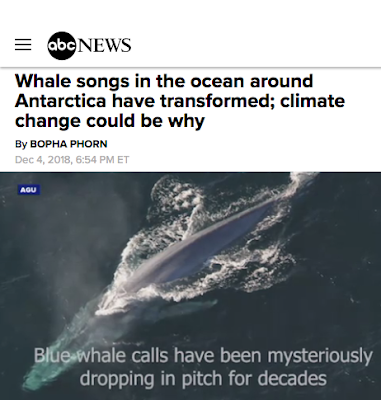 I have a question; when is it not climate change?

I stubbed my toe on the coffee table. Why? Climate change. I cut myself shaving? How? That's right, buster; climate change. Sometimes it hurts when I pee. Why is that? You guessed it, my CO2 emissions. I didn't pay my electric bill on time. Why? I tripped over my carbon footprint. Suck on that, JCPL.

I know the good folks at ABC News probably could never begin to wrap their heads around such a crazy, tinfoil kind of an idea but maybe this all has to do with all this bizarre seismic activity we're seeing all over the southern hemisphere.

Or perhaps the volcanic activity going under under the ice cap. Maybe that in turn is responsible for all these mass cetacean beachings we're seeing in southern Australia and New Zealand. Just throwing that one into the mix.

Hey Mockingbbirds, I'm sorry to crash your cult with factual ideas. But still, maybe when no one's around and your electronic listening devices are safely tucked away, you can mull it over.

Go on, you'll feel deliciously naughty. I guarantee it.

Oh, make sure your neural implants have been bypassed as well. I hear baking soda and a paperclip will do the trick but I'm not sure of the exact formula. Look it up. Just not at work. 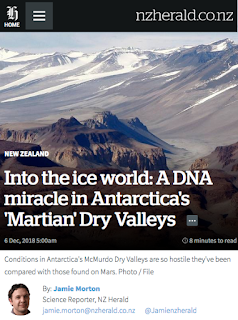 We're also seeing Mars-adjacent stories lately, for obvious reasons. There's this one here, that is--as usual-- only interesting to me for semiotic reasons. Mars, DNA, Miracle? Do the math. 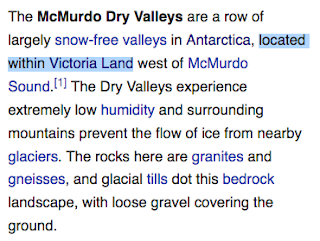 And like so many of these anomalous Antarctic stories these days, that one is coming of East Antarctica, the Victoria Land region in particular.

Why are so many of these strange stories bursting forth from the Victoria Land region these days? It's a real mystery. 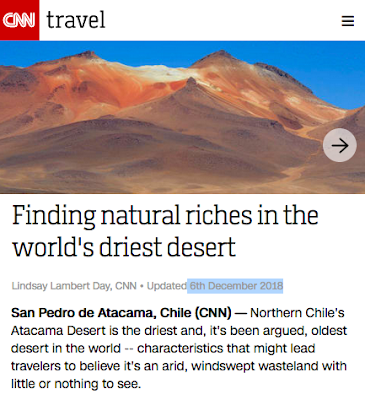 As is the focus on the Atacama Desert, which houses the observatory that first discovered SN1987A. I mean, just a real head-scratcher already. 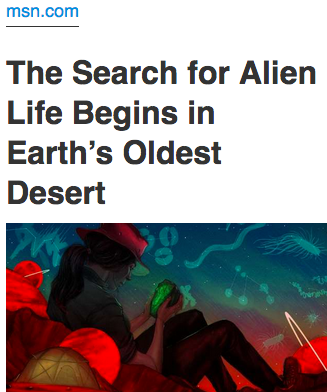 Especially since, like Victoria Land, the Atacama has been linked to Mars and the study of alien DNA. I know, I know. It's wacky and zany and just totally inexplicable but what really isn't anymore? I mean, have you asked yourself that lately? 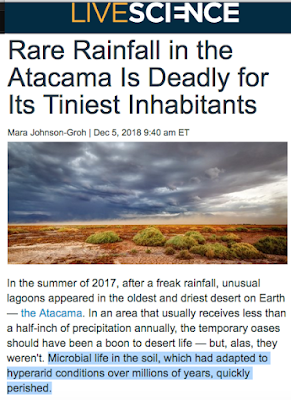 Especially since the dewdrops started dropping over the Atacama, which in itself is a major historical anomaly. Apparently microbes that had adapted over MILLIONS of years are basically drowning.

Crazy, right? SN1987A, copper-mining, dewdrops dropping, alien fetuses. I mean, it's all just so improbable. What could possibly be the connective tissue here? I guess we'll never know. 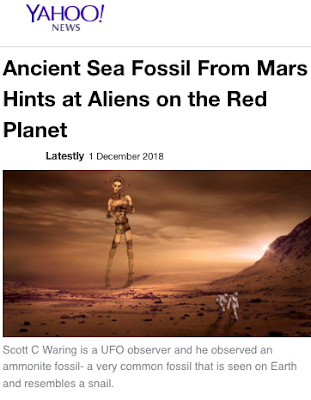 And then in the caveat lector ad extremo file, we have that nutty UFO guy Scott Waring claiming that there are ancient sea fossils being found on Mars. Note that the image Yahoo chose to accompany this very dubious story is of Star-Sailors and a Vega (or Nephilim, or Anakim, or Watcher, or whatever).

I'm skeptical as ever but do note the timing with the Mars InSight mission and the OSIRIS REX landing on Bennu (aka the Phoenix). Remember that Osiris is associated with the very pearly constellation of Orion and we've seen in these pages that the Phoenix is very identified with Lyra.
So that means the Nephilim rendezvousing with the Vegas. Out there in Heaven.

Who could possibly have foreseen these wacky, ritualistic hijinks and monkeyshines? It's a real conundrum, brothers and sisters. I'll tell you that.