The Titans Which Kept Not Their Seasons in the Abyss

"Its original and rightful rulers, the Titans"

Well, the San Diego Comicon just wrapped and fresh waves of trailer trash are upon us.

What's more, it seems we have a fresh meme to factor into our exegeses. First up is the Godzilla, King of the Monsters trailer.
Here's the elevator pitch:


"The new story follows the heroic efforts of the crypto-zoological agency Monarch as its members face off against a battery of god-sized monsters, including the mighty Godzilla, who collides with Mothra, Rodan, and his ultimate nemesis, the three-headed King Ghidorah. When these ancient super-species – thought to be mere myths – rise again, they all vie for supremacy, leaving humanity's very existence hanging in the balance."— Legendary and Warner Bros.

This being 2018 and all, Godzilla's casting front-loads the actresses, in this case Millie Bobbie Brown (Eleven from Stranger Things), Sally Hawkins (fresh off her breakthrough performance in the exophiliac Shape of Water) and Vera Farmiga (whose big break came playing opposite Heath Ledger on Roar).

And you might think this all looks a bit too Pacific Rim for comfort, but there's a new wrinkle in the offing; these aren't monsters, you understand, these are the Titans, the "rightful rulers" of you cancerous human scum:


The trailer establishes a grim premise for the film. The world is in tatters because humanity has acted as an ever-present “infection.” The result? A mass extinction event that is only spreading. The only antidote is the “titans,” the Earth’s “original and rightful rulers.”

Only when the Titans are unleashed will the world be saved, says Vera Farmiga’s Dr. Emma Russell in the trailer. --Forget 'Kaiju' in Godzilla: King of the Monsters -- They're 'Titans' Now

Eagle-eyed Secret Sun readers easily suss out what we're really looking at here; the Giants, the Angels Who Watch, the Titans which kept not their first estates, the Pearly Dewdrops, the Fallen Ones, etc etc etc.

It's really getting to be like shooting fish in a barrel these days, picking out the "hidden meanings" to all these big budget extravaganzas. On account of they're not hidden at all anymore.

In case you need a quick primer:

Richard Cavendish, in his book The Powers of Evil, makes references to the possibilities of the Giants mentioned in Genesis 6:4, being the Giants or Titans of Greek Mythology. He also lists the Watchers as the fallen angels which magicians call forth in ceremonial magic. Cavendish mentions that the Watchers were so named because they were stars, the "eyes of night."

And while a lot of bloggers might reach for their Lovecraft paperbacks, let's cut out the middleman and go straight to HPL's source; Alice Bailey's batshit spin on Blavatsky's already-bonkers Book of Dzyan:

The waters arose. All sank and was submerged. The sacred remnant, in the place appointed, emerged at later date from out the zone of safety.

The waters dissipated. The solid ground emerged in certain destined places....When the lesser Fifth had midway passed and all the lesser four were peopling the land, the Lords of Dark Intent arose...They constructed other forms. They called for cosmic fire. The seven deep pits of hell belched forth the animating shades.

The period of destruction extended far on either hand. The work was sadly marred. The Chohans of the highest plane gazed in silence on the work. The Asuras and the Chaitans, the Sons of Cosmic Evil, and the Rishis of the darkest constellations,  gathered their lesser hosts, the darkest spawn of hell. They darkened all the space.

The early Third produced the monsters, great beasts and evil forms. They prowled upon the surface of the sphere.

The watery Fourth produced within the watery sphere, reptiles and spawn of evil fame, the product of their karma. The waters came and swept away the progenitors of the fluidic spawn. Alice Bailey, A Treatise on Cosmic Fire


Get to work, Hollywood! 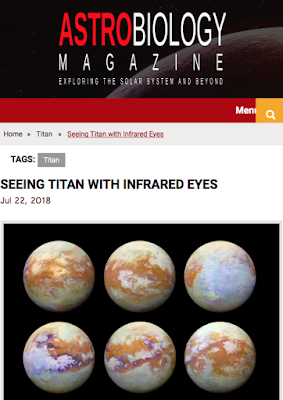 And as sheer dumb luck would have it, we have some fresh Hollywood CGI infrared imagery allegedly from the Cassini probe of--wait for it-- Titan!

On the same weekend all these trailers drop? What are the odds! Astonishing.


'The veil has lifted': NASA releases stunning new mosaics of Saturn's massive moon Titan, revealing the clearest views yet of the world said to be an 'alien Earth'

"Alien Earth!" Stop it, you're killing me with these yuks!

And get ready, because we're in for more Abyssal giggles and grins come Christmas because the long-awaited Aquaman trailer is here! If you've been reading The Secret Sun for the past year you've been expecting all this imagery so sit back and enjoy it.

And I do have to say it looks quite jolly good fun for a DCU movie, which tend towards the gloomy side of the emotional sidewalk.

Do also note that when young Aquie communicates with the sea creatures-- ie., channels otherworldly powers-- he pops himself some real Betty Fraser Eyes. You can tell all the boys think he's a spy.
I think the line was originally, "I want to..."

Less successful is the Titans trailer, the CW-ified spin on The Teen Titans that looks, sounds and feels uncannily like one of those lousy superhero-knockoffs that popped up in the wake of the success of Tim Burton's Batman.

It's definitely got a very strong 1990s straight-to-video flavor to it--kind of like that unsold Justice League pilot or the Roger Corman Fantastic Four movie-- which is actually kind of charming in its own way.

Mind you, by "charming" I definitely don't mean "entertaining."

I haven't a clue what the series is about but do note that Season 3 of the anime series Attack on Titan premiered somewhere or other over the weekend as well.

Don't forget the craptastic Netflix flick The Titan, which we looked at a few months back here. I don't know exactly what's going on here- it's not as if there's some groundswell of demand for Titan-themed fodder out there-- I just know something is going on. So be advised.

I hear what you're saying: Oh, that Secret Sun guy again, making mountains out of a bunch of random molehills. Well, feast your eyes on this story, Bill Nye: 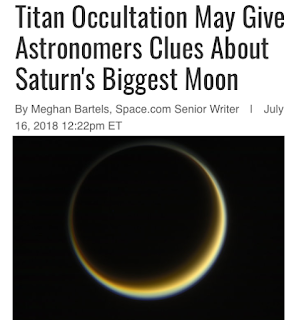 Not only did we get some computer-generated flibbledy-floo orbital imagery of Titan, it looks like it had its very own occultation this week! 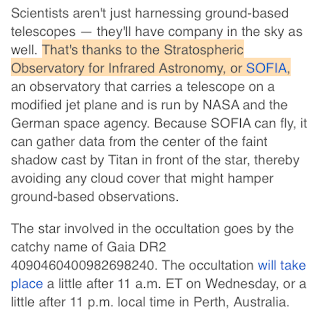 Oh Lord, I can't even paraphrase this nonsense with a straight face...

OK, NASSAU NAZCA NASA's SOFIA observatory (no seriously) spied the occultation of Gaia (!) R2D2 (or whatever) by Titan from --you guessed it, Perth (AKA Siren Song City).

I have no idea where this star actually is or why we should care about Titan occulting it, since I'm sure Titan occults some random star or other more or less all day, every day.

But SOFIA, Perth, Titan, Gaia (AKA the mother of the Titans and the primordial sea gods)?

So keep your eyes peeled, Sunsters. More of this fresh entrainment on the way, I'm sure.