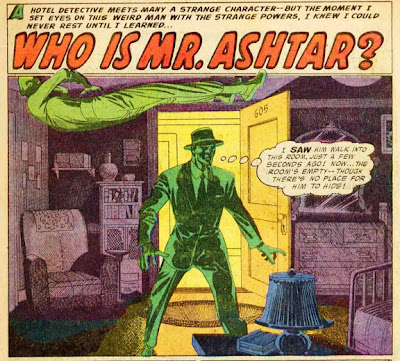 I've been re-reading John Keel's Operation Trojan Horse and finding I'm not quite as impressed as I was the first time I read it. Before it seemed like a marvelous corrective to ETH orthodoxy, but on re-reading I was often struck by Keel's lack of discernment (if not outright blarney) and kneejerk tendency to ascribe everything to his "Ultraterrestrials."
It actually started to remind me a bit of Ancient Aliens, in the way it offers a one size-fits-all answer to every question. Too often Keel ascribed an event to the these beings when it was painfully obvious the real culprit was madness or plain, old-fashioned bullshit.
There's also more than a bit of irrational paranoia in its pages and a tendency towards Collins Elitism, something we're seeing quite a bit of as the old guard of UFOlogy heads for the barn. I don't want to paint too negative a picture here-- I wouldn't have stuck with it (I'm on the last chapter of my re-read) had I not found a lot of value in the book.
Regular readers know I don't subscribe to the ETH myself but rather what I call the Elusive Companion Hypothesis, which links UFOs and related phenomena to the ancient race of "Watchers," known to the Sumerians as the Igigi.
Aside from people like Tim Beckley, LA Marzulli and the Collins Elite-- who obviously bring their own religious agendas to the table -- I don't see any persuasive evidence that the Watchers do much besides watch, though I do believe they made it their business to mess with our heads when they became concerned about the Cold War and the nuclear arms race.
Indeed, Keel and I are in agreement on the virtual nature of contact and abduction events, something I had intuited back when I started thinking about this stuff again. This paragraph here is one of the nuggets of pure gold this book has to offer:

The well-investigated miracles are proof that the human mind can be exposed to induced hallucinations and that information can somehow be inserted into the mind by some unknown mechanism. In most contactee events, the percipient is alone or with a small group when the UFO contact occurs.

Such percipients suffer medical effects which indicate that the "contact" was actually hallucinatory, just as the episodes involving children and religious entities have proven to be wholly or partially hallucinatory. The event or vision takes place only in the mind, not in reality. The exterior manifestations are merely part of that mechanism, a byproduct rather than a cause.

It is likely that an outsider trespassing on the scene of a UFO contact would see the contactee standing in a rigid trance, just as the witnesses to miracles see only the children in a blind trance state. The contactee's real experience is in his or her mind as some powerful beam of electromagnetic energy is broadcasting to that mind, bypassing the biological sensory channels.

This brings me back to what Mike Clelland and I discussed about some of 50s contact cases -- and maybe even the Betty and Barney Hill case as well-- a sighting is followed by a witness reporting being struck with some kind of paralyzing beam before undergoing this bizarre, impossible experience, of which the details are always radically different and therefore unbelievable.
Keel repeatedly argues that the Ultraterrestrials have no physical form and take form according to what the observer expects. I couldn't help but think of my recent encounter with the anomalous, in that the figure I saw (small, as they usually are) seemed formless before taking shape (and as I discussed with Mike, a man in Scotland had an almost identical encounter back in the 70s but took ill with symptoms of radiation exposure afterwards).
Scott Corrales' recent post on UFOs and cemeteries was also on my mind, given that there are no less than six boneyards within walking distance of where I sit, including one bursting with high initiate symbolism.
But what I kept thinking is that how you approach this issue is how it will ultimately present itself to you. We see people who think the UFOnauts are angels, we see people who think they are demons. We see people who think they are extraterrestrials, we see people who think they are energy beings playing dress-up. We see even more people who think it's all a bunch of nonsense.
In this, the phenomenon is the tabula rasa that Jung argued it was in Flying Saucers- a blank screen onto which the observers project their own unconscious contents.
And then there's Jack Kirby.
DC recently published an omnibus of Jack's late 50s work, including many of his weirdest UFO stories. I found it a bit irritating the editors credited the writer as "Unknown," when a houseplant could spot Jack's obsessions a light year away.
We've looked at some of those stories in this series, but this was another one that synched up with my Trojan Horse re-read.
First a bit of background... If you've poked around the fever-swamps of space brother UFOlogy you've probably heard the name Ashtar here and there, particularly the neo-Theosophist, vaguely authoritarian Ashtar Space Command. Keel writes that Ashtar has been with us for quite some time:

Thousands of mediums, psychics and UFO contactees have been receiving mountains of messages from "Ashtar" in recent years. Mr. Ashtar represents himself as a leader in the great intergalactic councils that hold regular meetings on Jupiter, Venus, Saturn, and many planets unknown to us.

But Ashtar is not a new arrival. Variations of this name, such as Ashtaroth, Ashar, Asharoth, etc., appear in demonological literature throughout history, both in the Orient and the Occident. Mr. Ashtar has been around a very long time, posing as assorted gods and demons and now, in the modern phase, as another glorious spaceman.

Ashtar also made an appearance during the Contactee craze of the 1950s, when an eccentric doctor (who'd later show up in the story of The Council of Nine) got himself in the papers when he claimed that Ashtar had chosen him as a prophet of doom, naming the time and place of The End:

Dr. Charles A. Laughead, an MD on the staff of Michigan State University in East Lansing, Michigan, started communicating with as­ sorted entities "from outer space" in 1954, largely through trance mediums who served as instruments for Ashtar and his cronies from that great intergalactic council in the sky. A number of minor prophecies were passed along, and as usual, they all came true on the nose. Then Ashtar tossed in his bombshell.

The world was going to end on December 21, 1954, he announced convincingly...A few chosen people would be rescued by spaceships. Naturally, Dr. Laughead and his friends were among that select group. Having been impressed by the validity of the earlier predictions of the entities, Dr. Laughead took this one most seriously, made sober declarations to the press, and on December 21, 1954, he and a group of his fellow believers clustered together in a garden to await rescue.

Needless to say they waited a long time. Either that or got really drunk and laughed the whole thing off. Again, Keel chalked this up to the Ultraterrestrials and their vicious pranks. But when a weirdo like Andrija Puharich thinks you're a flake (I'm looking at you, Dr. Laughead), chances are good you might have a screw or two that needs tightening.

The story seemed to make an impression on Kirby, though. He cast Ashtar as a mysterious figure (wearing a mask, no less) who checks into a hotel. Shades of Keel's Men in Black, he's stymied when presented with a pen.

A detective decides to see what this weirdo is up (he might be a Red, after all) and spies him walking through a door, alien-style. 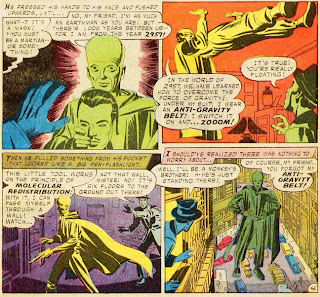 The detective confronts the stranger and discovers he's a time traveler (shades of Redfern's Men in Black) who's come back in time to help save future earth from a Martian invasion.
Longtime readers might remember that Kirby posited a classic Grey as a time traveler in Black Panther, though that character had more familiar Ultraterrestrial psychotronic capabilities. Kirby never let a good obsession go to waste. 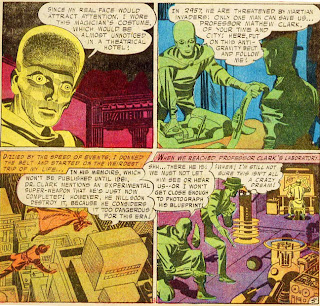 And here's where the story gets weird- it's almost as if the pictures and the text are telling two different stories. Ashtar is giving the dick some bullshit song-and-dance about being from the future and needing blueprints and all of the rest of it but at the same time we get the impression Ashtar is hypnotizing the poor slob and telepathically implanting the usual contactee rigmarole about flying through the sky and walking through walls.
All well before these kinds of stories became common in abductee reports. 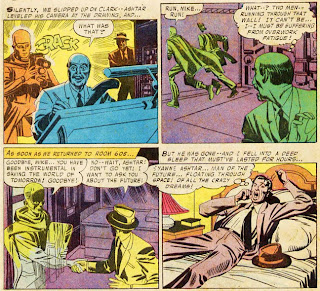 And then we hear more riffs from the abductee hit parade-- the mysterious flash of light, the mysterious figures out of the corner of the eye and the vanishing stranger-- all capped off by the gumshoe suddenly falling into a deep sleep. It all ends with the detective reading Ashtar's name in the register and the date written simply as 2957.
In other words, the kind of account Operation Trojan Horse is packed to the gills with. Here again is that unconscious signal, weaving in and out of Kirby's work, telling a metastory, or even a parastory. And here again are anomalies that don't coincide with the surface text.
Kirby was certainly processing Laughead's debacle from three years prior and trying to construct a narrative out of the rubble. But almost in spite of himself another story ends up being told.