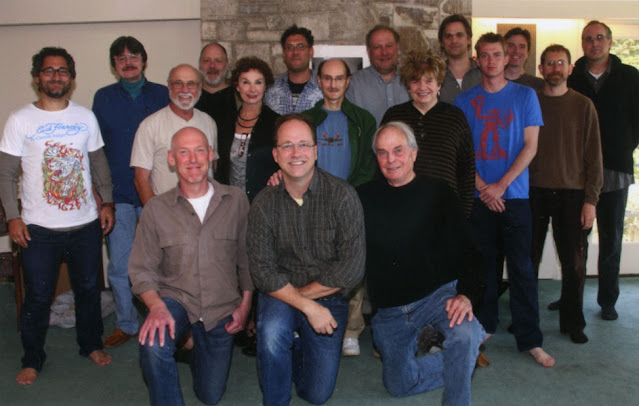 Well, Time flies and Time crawls. But sometimes you enter a state in which Time flows in such a manner that it seems to expand and contract in an entirely different and yet totally satisfactory fashion.
That happens when your mind is so completely engaged morning, noon and night that each moment seems to be pregnant with significance, and therefore worth experiencing. This has been my obsession for several years now, when I first began to notice the days and weeks beginning to whiz by. I realized that the best way to moderate that flow was through interesting work, an increasing rarity in this day and age. 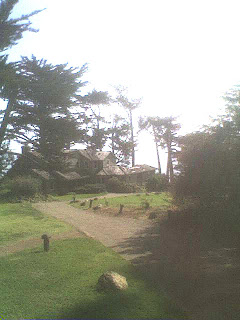 And so it was for the second annual conference on the Supernatural, Supernormal and Popular Culture at the Esalen Center for Theory and Research, created and moderated by the brilliant Jeff Kripal of Rice University.
I wrote about last year's conference here and here but that was simply a dry run for this year's blowout. This year's conference was also a lot more stressful for me in some ways since I not only presented a revised version of "The Synchromysticism of Jack Kirby" for the group, but also a public talk called "Saucers, Psychics and Psilocybin: The Mythologies of The X-Files" and finally a filmed interview for Jeff's upcoming documentary dealing with all of these topics.
So, as you can see from the class photo, this was a focused, high-powered collection of brains sorting through all of these issues. Jeff outdid himself in assembling thinkers who are directly engaged with the whole process of extraordinary knowledge and extraordinary experience playing itself out through ordinary popular culture.
I'm hoping we see at least some transcripts of this conference go up on the CTR site, because if you're reading this blog, I guarantee that you would have been fascinated by every single presentation. And throughout the week were more fascinating conversations than you could possibly keep up with. Just on the ride from the airport, even: I rode down with Larry Sutin, Philip K Dick's biographer and his wife Mab, Chris Partridge, who teaches religion at the University of Lancaster, and Collin Eyre, a Bodhisattva-in-training who's working towards his degree at the Center for Integral Studies (and really made the entire experience run like clockwork). 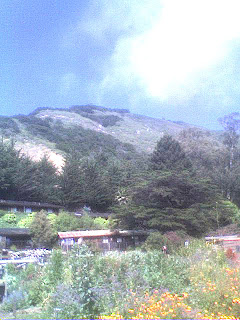 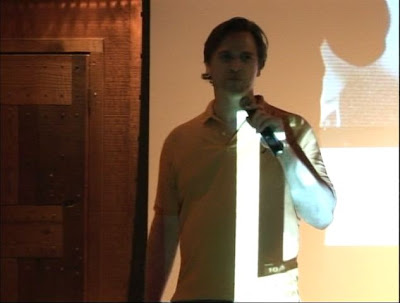 And boy, it's a really good thing that I spend so much time preparing for all of this. It's one thing to write about these topics, it's another to do a podcast on them and it's a whole different universe when presenting your crazy ideas to a roomful of professionals with credentials up the wazoo. You'd better make sure you've done the math.
It's then another reality paradigm entirely to do so in a roomful of those same professionals and a bunch of other people who have no concept of what we've been discussing the past week.
Especially when that room is a legendary venue where many of your personal heroes have presented their own ideas to the world. And, oh yeah, it's being videotaped for posterity. So that was my Wednesday night. How was yours? Needless to say, I nearly choked worse than the '86 Sox.
But I'd spent so much time going over all of this material that some obscure module of my brain kicked in and presented a reasonably cogent version of the material that many of you are familiar with from this blog. I guess this is the same principle you get in sports or military training- your first time out, you're going to choke. So you need to drill yourself in order that muscle memory gets through your baptism of fire.
The funny thing is that I thought I was dying out there, but everyone told me it was really interesting, so there you go. I wasn't entirely happy with my presentation- I was offering too many answers and not enough questions. Which is really a function of trying not to wilt in front of forty people.
I was thrown off my stride (such as it was) at one point- Paul's chair inexplicably exploded when he leaned back. Those of you skeptical about mediumship (and I usually count myself in that group) will be interested to know that the episode I was discussing at that moment was one I had had a precognitive dream about, that then unleashed a chain of synchronicities that I wrote about in detail on this very site.
Surely not a pleasant experience for Paul, but in my own reality these kinds of meaningful, message-laded moments usually aren't. Usually the most meaningful turning points in my life have been extremely unpleasant.
Happily, Erik Davis nailed my amorphous thoughts the next day in his presentation on Aleister Crowley and their ultimate influence on Led Zeppelin. The sheer mystique of Led Zeppelin- particularly in the 70s- arose from their refusal to answer any of the questions about the enigmatic symbols and messages in their records (even that retarded "backwards-masking" controversy).
Chris Carter and Frank Spotnitz are the same way- they will never make a definitive answer about the mysteries of The X-Files (and certainly not about all the fascinating mythic parallels).
The genius of that is that it keeps the conversation going, and allows the viewer to create her own reality with their framework. Erik also gets extra-cool bonus points for kicking it off with some righteous Ditko Doctor Strange panels and for clips from the 1926 Crowley-inspired film, The Magician (anyone have a copy of it out there?).
Victoria Nelson rounded out the presentations with her amazing dissection of the growing body of juvenile vampire fiction. Point by point, she graphed the history of vampire lore, it's entry into the pop culture realm, it's collision with gothic romance leading to the early Dracula films and then all the way up to the polymorphous vampires of the Anne Rice novels to this strange mutation of vampire mythology into a weird subset of superhero lore.
Like so much else, Victoria's talk opened me up to a whole new sphere of memes to explore. Juvenile fiction is increasingly female-oriented, and I think it's important to understand these ideas that fly under male-oriented media.
The schedule then finished up with a panel discussion of filming the paranormal. Jeff's project was discussed by he and Scott, and a film adaptation of Michael's classic novel Golf in the Kingdom was discussed with George Stephanopolous (no, but actually he's his cousin),
Michael and actor Mason Gamble (who made his debut as Dennis the Menace and has also appeared in films like Gattaca and Rushmore). Pretty amazing cast in that film: Malcolm McDowell, Joanne Whalley, Julian Sands and Frances Fisher, among others.
Then after that we all sat down for an amazing seafood dinner, whipped up by wunderkind chef Tony and his small crew (the food at Esalen is insanely delicious). Cool experience to sit with that surreal view of the Pacific (which for some reason I don't quite understand seems to rise above the horizon line).
The next day my stomach and I were again harrassed by Route 1 and I stayed overnight in SF, which was bitterly cold, believe it or not. I met up with an old friend and we briefly walked the Haight, which was a grimly appropriate statement on the present condition of the counterculture.
Half of the stores were closed (on a Friday night), and an icy Pacific wind menaced all of the homeless hippies huddling in doorways. I saw the Haight as the significantly downscale, un-hip cousin to Phila(e)delphia's South Street. Quite a comedown for the birthplace of the 60s counterculture. 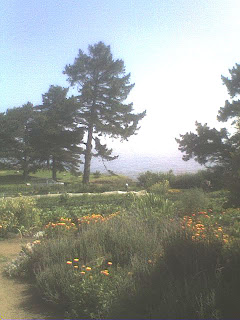 As a type of open forum for all comers, Esalen had attracted some controversy for various ideas or systems that have been discussed there in the past (which Jeff details quite nicely in his book on Esalen) as well as some attention by certain interests not otherwise given to psychonautics.
That's not what is going on now, though. I'd recommend anyone with questions- or even suspicions- about Esalen check it out for yourself. It's probably one of the Top 5 most beautiful places on the planet, the food is great and you can get yourself a nice massage or chat with some amiable hippies in the baths. The programs are almost entirely oriented to somatic modalities- meditation, massage, drumming circles and the like.
In fact, the only scary thing about Esalen is the drive there. What I left there thinking about were new spaces, based primarily - if not entirely- on Western traditions and contemporary culture. I was very much into Buddhist traditions (particularly Zen, specifically Alan Watts' work) when I was younger, but I find myself more and more fixated on more cerebral and more culture-appropriate modalities.
Where my New Age and Eastern investigations ultimately led me was straight to Jung, who also dabbled in oriental systems but was primarily centered in the West.
Which is to say that this blog is ultimately (and paradoxically) about a shared kind of individuation. I know that Alex Grey is opening a new space in upstate New York, and I certainly hope that not only does he succeed, but that he inspires other spaces as well.
I truly believe the locus of spirituality and esotericism is moving back to the West, and I think it's our responsibility to help that process along. Eastern modalities can be powerful and profoundly meaningful, but they can often degenerate to either a touchy-feely vacuousness or a kind of authoritarian submission to gurus who almost invariably abuse that power.
We've been taught that the West has no mystical tradition of any real value, and that - as Jeff pointed out - the revelation is always "outside." I suggest that the exact opposite is in fact true, and that it's time for a distinctly Western tradition to assert itself. This was what I found so electrifying about magazines like Gnosis and Dagobert's Revenge.
I think what might have been revelatory to past generations has become routinized and more than a little arid, and that the danger of Western visionaries can ignite a worldwide awakening. But in order for it to happen there needs not only to be vision and discipline, but an over-arching infrastructure to help it flower.
I think that Synchromysticism is a wonderful tool towards a new kind of Reality Hacking, but it can't be left at that. However, it will be through these collective dreamworlds of pop culture that new dialectics will result.
Which is why it's also important to keep a critical eye on those dreams, and provide people with the tools to separate the transcendent memes from the cultural conditioning techniques, but without throwing the baby out with the bathwater as we see too much of these days. I hope some of you will think about all of this. Anyhow, that's where it stands Memorial Day weekend 2009. Infinite gratitude to Michael Murphy, Jeff Kripal and Collin Eyre.

•Well, that probably did happen in an alternate reality, but in this one the Kirby rant went off without incident. I'll be reposting my Mindbomb series on the Seminar this week, to bring everyone up to speed before continuing with fresh research on Jack's odd abilities.