Secret Cinema: Quatermass and the Pit 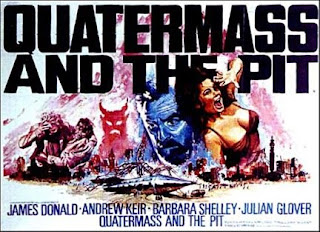 Before Chariots of the Gods, before The 12th Planet, before Gods of Eden, before The X-Files, before Stargate, before Battlestar Galactica, before Indiana Jones and the Kingdom of the Crystal Skull, before Transformers 2 ,there was Quatermass and the Pit.
Although popularized in the US with the Hammer version (see video above, retitled Five Million Years to Earth), Quatermass originally aired on the BBC in the late 50s as a serial.
Though the Hammer version is certainly worthy, the BBC version is nothing short of a sci-fi revelation. Brilliantly written and produced, the series would become a monster smash in the UK and a profound influence on a generation of sci-fi fans and writers.
From The Independent:

Kneale's greatest achievement as a melder of science fiction and horror was undoubtedly Quatermass and the Pit, which kept people out of the pubs while it was running. He cheerfully threw aliens from Mars, pagan rituals, the "Horned God" and race memory into the mix and scored a huge popular success.

If you looking for evidence of culture's reverse-evolution with the rise of television, Quatermass is your motherlode. Kneale's script puts nearly everything on TV today to shame. In 1958, mind you, he was warning of the militarization of space, racial tensions, government cover-ups of alien contact and pseudo-skeptical denialism.
Pretty strong stuff, almost unimaginable in today's highly-charged ideological climate -- outside of sci-fi programs like Battlestar Galactica, that is. 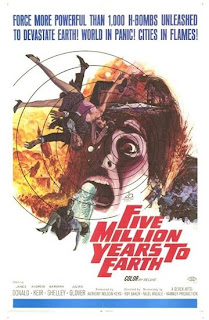 And if you're a regular reader of this blog, the fourth episode of BBC series especially will send chills down your spine. In excruciating detail, Kneale paints a scenario where aliens from a dying planet (Mars, in this case) come to earth and manipulate the genetic structure of proto-hominids in order to act as receptacles for alien consciousness.
Kneale's attention to detail is impeccable- the aliens keep themselves isolated in a sealed compartment on their ship to avoid contamination from Earth microbes. Their primary concern is the expansion of the proto-human neural capacity, as they were attempting to download their own consciousness into these new hybrid creatures.
Did I mention this was written in 1958?
As in The X-Files, communion with the residual alien consciousness manifests itself in psychic phenomena- telepathy and telekinesis, to be exact. Kneale also presents a scenario in which the racial memory of these beings and our ancestral contact with them is encoded in our DNA. Ghosts, demons and the occult are all the byproducts of periodic subconscious eruptions, particularly when humans are exposed to the radiation from the buried spacecraft in Hobb's Lane, Knightsbridge.
I'm going to leave it all there because I think everyone who visits this blog should watch both the BBC and Hammer versions of Quatermass.
It is almost certainly the first exposure of AAT to a wide audience - I'm very curious to see if Von Daniken or Sitchin have ever acknowledged it as an influence. Certainly its influence is all over The X-Files, and Stephen King's Tommyknockers is essentially a New English pirating of the concept.  We'll be looking at Tommyknockers- and most certainly, the other Quatermass stories- in greater detail in the future.
UPDATE: Emperor (host of The Cabinet of Wonders blog) adds this crucial data download:

It is easy to underestimate the influence of Nigel Kneale these days but back when Quatermass and the Pit were being shown the whole of the country just stopped to watch it (a third of the viewing audience saw it when it was originally broadcast - impressive numbers for any TV show but considering it was sci-fi...). I think the first one I caught was the film of Quatermass and the Pit when I was a kid and I remember being thoroughly unsettled by the whole thing. They recently released a Quatermass boxset (of the first three, the fourth TV serial is collected separately) along with others for Beasts and Kinvig (also worth checking out, as is Stone Tape if people can find it) and a book was released at the same time: "Into the Unknown: The Fantastic Life of Nigel Kneale" and it touches on some of the themes mentioned like this from page 69:

"The central concept of Kneale's serial, that aliens had influenced the development of life on Earth, became a familiar one over time, but in 1959 it was relatively fresh. Some have detected a kinship with Kneale's approach and the writing of H.P. Lovecraft, but Kneale denies any influence, on very simple grounds. "I've never read any Lovecraft!" he insisits. The writing of Erich von Daniken later popularised the notion of extra-terrestrials guiding Mankind, which also greatly inform the 1968 film 2001 Space Odyssey. (Many, Kneale among them, have also remarked on the recurrence of an unearthed alien object in a pit playing a pivotal role in Kubrick's film.) The influence of the serial, as we'll see, was both long-lasting and wide-ranging"

One that is unacknowledged is the end sequence of Indiana Jones which strongly parallels that in the first Quatermas. Dan O'Bannon is happy to admit the influences though, most obvious in Alien, where they find the crashed alien ship. However, the list of where his ideas cropped up and the people his work influenced is impressive. I'll leave the last words to Grant Morrison (page 99):

"Writer Grant Morrison feels that counter-cultural ideas are peppered throughout Kneale's work, however, unwittingly. "There's a lot of altered states, hive minds and alien intelligences controlling the population in his work," Morrison suggests"

"Morrison gladly attests to the influence Kneale has had on his own work. "All that stuff was definitely a really big input for me," he says. "The idea that every story had a brilliant concept and started out from something really original was a big inspiration. Every one of them builds off this really simple, brilliant idea: we are descended from Martians, we are food for aliens, every one of them's just a great little concept. It's a mythical quality for me. The stories are so tiny, but I feel they're myths for the age of science. That's what he created. people have been riffing off him for a long time. There's something eternal about Quatermass""

Oh and he had an idea for a final Quatermass story: "Quatermass in the Third Reich", a prequel which say him hanging out in Germany with Nazi rocket scientists and stumbling across their larger plans involving the occult. Kneale was invited to write an episode of the X-Files but turned it down, a real pity!! As a child he read a lot of HG Wells and MR James but the third and fourth Quatermass adventures do make me wonder if he somehow came into contact with Charles Fort's work - from The Book of the Damned (1919):

"Would we, if we could, educate and sophisticate pigs, geese, cattle? Would it be wise to establish diplomatic relation with the hen that now functions, satisfied with mere sense of achievement by way of compensation? I think we're property. I should say we belong to something: That once upon a time, this earth was No-man's Land, that other worlds explored and colonized here, and fought among themselves for possession, but that now it's owned by something: That something owns this earth -- all others warned off. "