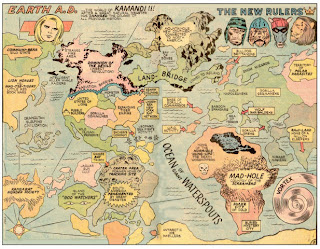 Looking back on my childhood, it actually was not superheroes that I loved most about comics, it was loner antiheroes like Conan and Kamandi.
I suppose that says a lot about how I perceived the world; both characters were lost souls fighting simply for survival in worlds gone mad. My favorite superheroes weren't exactly superheroes either; Thor was a god and Doctor Strange was a magician.
Don't get me wrong, I read plenty of superhero comics too. But the stories that stuck with me were not the ones were the hero flies in from above and solves everyone's problems. They were the one with characters who won by living to fight another day.
In some ways, Kamandi was Jack Kirby's most personal strip- the world you see above is like a psychodramatic map of New York City during the early 20th Century. In other ways, it was his gift to the kids who were drawn to comics- loner outcasts trying their best to navigate the everyday world of cliques and bullies.
Older fans hated it- maybe because in a decade marked by psychedelic navel-gazing and escapist "relevancy" it felt too much like the world they thought they left behind on graduation day.
at December 11, 2007