Send in the (Killer) Clowns. Don't Bother. They're Here.

I guess there's a theme emerging this autumn, what with the Joker movie and It: Chapter Two hitting the multiplexes. Killer clowns do indeed seem to be the dominant archetype of the season, all too appropriate for a world descending into mass psychosis and epidemic levels of stupid.


There's also this Wrinkles the Clown picture, which I don't know much about past the trailer.

I do remember there was a clown panic a few years back, but I can't remember if this character was part of it. I have a vague sense that the recent clown panic was somehow Juggalo-inspired, or maybe it was The Dark Knight, I don't remember.

The Dark Knight was so packed with bad mojo and kicked up so much synchro-memetic goofer-dust that I actually try not to think about it all that much. Outside of the fact that it also synched directly into two of my most demented fixations longest-term areas of study, a little detail that itches at the back of my brain like a flea-bite.


We've covered the killer clown archetype many times over the past several years, including a look at the Great Clown Panic of 1981, which your eagle-eyed host suggested may have originated in Braintree, given that the known sightings formed a crescent around the cursed burg.

That, and the fact that Braintree was a sick and demented clowny-clown-town back in the day, as longtime Secret Sunners may recall.

The Great Clown Panic was the acknowledged inspiration for Stephen King's IT, which first hit screens with the 1990 TV mini-series and has now been broken up into two chapters for the big screen.

I saw the first movie and it was...OK, I guess? I wasn't scared, but then again this kind of stuff doesn't scare me at all. I'll check this one out when it streams. If I'm not busy or whatever.

But like the first chapter, I can't help but notice all the water, water everywhere in the trailer here. Does it mean anything, outside of the fact that a lot of directors like to shoot it? I dunno. Maybe.

Do I care? Not so much. Just make a note of it for future reference. 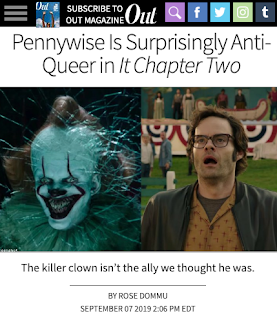 But to show how desperate and cringeworthy clickbait jockeys have actually gotten, there's this universally-scorned slab of stupid: some nutcase expressing disappointment that an interdimensional murder-demon is "surprisingly anti-queer" and not a good "ally."

Listen, I get how ruinously desperate online media has become. I realize how the entire industry is teetering on the brink of total collapse. But this? This is a level of cringe heretofore unseen, even in this shit-hell of a year.

Then again, I clicked on it, didn't I? The sacrifices I make for you people.

With IT already in the theaters, now the buzz is all over this new Joker film. Oscar buzz is already swarming all over it like hornets at your picnic. Which is not necessarily a happy omen for our man Joaquin Phoenix there. Be extra careful, bro.

It looks like they toned down the obvious Jaz Colemanisms of the character redesign, which longtime readers will see as a favorable portent. But still, there's a whiff of sulphur about this project here. How or why I can't rightly say. Maybe I'm just spooked, is all.

That being said, I'm intrigued by the trailers and by Phoenix's performance but I'll probably wait for the stream on this one too. I just can't get into the cinema experience anymore. I've been let down too many times. It's heartbreaking, but here we are. 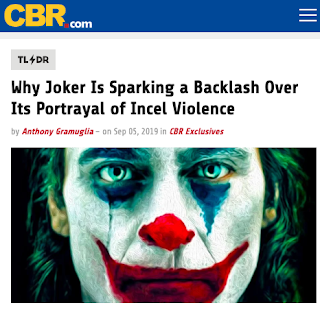 But since we all live in an open-air lunatic asylum, I should note that mentally-sick, attention-starved Twidiots seem to be trying to whip up controversy about the Joker film, promiscuously invoking the dark, totemic incantation, "incel." It's either the mentally-sick Twidiot's work or the folks in the secret viral-marketing task-force at Warner Bros. Or both.

My vote is both.

Of course, no one gave two f**ks about the Joker until Frank Miller and Alan Moore foregrounded him in their Dark Knight Returns and Killing Joke masterworks in the latter half of the Eighties.

And arguably, no one outside the sad and sweaty environs of the comic book specialty stores did either, until Jack Nicholson sprayed himself all over the character in the 1989 Batman blockbuster.

From that point onward we couldn't get rid of the friggin' guy. 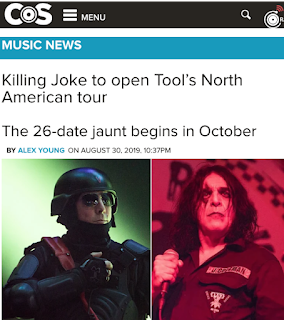 I don't know about Miller, but certainly do know that Moore took inspiration for his Joker from occult-damaged mutant-metal legends Killing Joke, so much so that he named his Joker opus after them.

So it's only fitting that Killing Joke are bursting back into the world supporting Tool on their North American tour, offering the band their biggest opportunity to warp minds in quite a long while.


They have a habit of popping up at the most interesting times, as Sunners are well-aware.

Do note that the Joker film is, somewhat weirdly, based on Martin Scorsese's 1983 sleeper, The King of Comedy. Tying into the early 80s alt.rock vibe, it should be noted that Mick Jones of The Clash-- the singer on "Should I Stay or Should I Go?" of Stranger Things fame-- makes a brief cameo in The King of Comedy with a handful of Clash hangers-on, like future Night Court star (and former Meat Loaf screecher) Ellen Foley (or "Flellen Floo-Floo," as I prefer to call her)

The Clash were all too stoned to provide Scorsese-- a big fan-- much useful footage. They later compounded the felony by "paying tribute" to Taxi Driver with the absolute worst celebrity impersonation in recorded history (Clash road manager Kosmo Vinyl doing DeNiro) on the tuneless Combat Rock stinker, "Red Angel Dragnet." 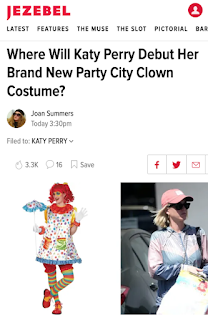 Speaking of cringe, I'd be remiss if I didn't mention that Katy WilliamRefrigeratorPerry is also chasing after the Clowny bandwagon, as is her habit. Poor thing.

Has anyone performed a welfare check on her lately? Maybe they should.


I'd also be remiss if I didn't mention that Cold World did a doom-metal remake of Our Lady and her Unmercenary Musicians' timeless "Fifty-Fifty Clown," for exact reasons that continue to elude me.

But I appreciate it nonetheless, not only for the classic Sab vibes but especially in light of recent, rather doom-metal kinds of events. 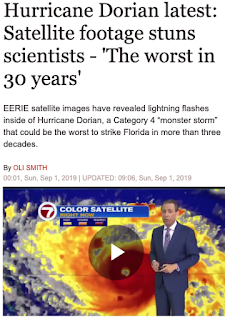 Specifically, the fact that Massive Attack began their (rescheduled) US tour on the same night the hellish Hurricane Dorian made landfall, massively attacking the Bahamas and leaving historically-unprecedented destruction in its wake. 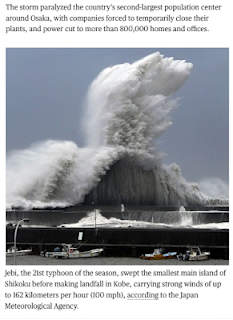 Do remember this is almost exactly a year after the Sibyl brought a select, invitation-only audience to tears in London, at the very same time the equally-horrific Super Typhoon Jebi lashed Japan. She took the stage a short time after a remarkable super-pod of dolphins were spotted across the Pacific in Monterey.

I think at this point it simply goes without saying that powerful, perhaps unknowable forces would like us to pay special attention to this disarmingly humble, modest and unassuming woman. If you haven't realized that yet, I can't help you anymore.

There are those that already do realize, you'd better believe it.


Massive Attack not only brings the Sibyl in tow, but also Adam Curtis' MK-Ultra as motherf**k, Parallax View-inspired videos, which he first rolled out with the band-- and the Sibyl-- six years ago and later incorporated into a ballet literally called MK-Ultra.

Curtis obviously seems to understand the strange and elemental powers that hover around this enigmatic woman even 30 years after her heyday, which is why he showcases her performances with disturbing apocalyptic imagery. Which goes all too well with the apocalyptic syncs.

Which attentive readers should pick up on... 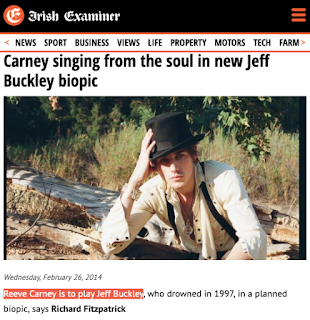 ... given that Dorian (Gray) is a main character in Penny Dreadful, starring ultramega-Frase-resonator Eva Green.

In the Oscar Wilde novel-- the first known use of Dorian as a name, incidentally-- Dorian breaks the heart of a singer/actress named-- wait for it-- Sibyl.

As we recently discussed Dorian is played by Reeve Carney, who looks (and sounds and plays) so incredibly much like Jeff Buckley that one's given to wonder if he was in fact cloned from the same batch. Certainly a casting agent seemed to think so.


Now Carney is Jeff Buckleying it all over Broadway in the smasheroo Hades Town, an adaption of Orpheus and Eurydice gone Americana. As we discussed a while back in reference to one of the Sibyl's many musical love-letters to her Shepherd Boy:

'Rilkean Heart' and Rilkean Dreams are references to the poet Rainier Maria Rilke, whom the well-read Fraser compared Buckley to. And sure enough, Rilke is perhaps most famous for his own lament, The Sonnets to Orpheus, which he wrote when a young friend of the family died.


The old gods are not dead, folks. In fact, they're just waking up, brewing a pot of celestial java and planning out their itineraries.

Heaven or Las Vegas help us all.


PS: Speaking of apocalyptic portents, apparently the soundtrack for the new Castle Wolfenstein game is inspired by Garlands.