This is the Dawning of the Age of Fraserius


In this clickbait-driven age, you gotta be wary of these sensational kinds of stories. More often than not, these things end up getting walked back or forgotten. But we don't care whether there are actual signals beaming here from outer space, do we now?
No, we don't. We only care about the syncs.


So the tl;dw here is that astronomers have suddenly doubled the number of so-called "fast radio bursts" being detected coming in from the vast reaches of space. I don't know what exactly this may portend (my current money is on "nothing") but it certainly speaks to the fact that the universe is pretty big and everything is really far away.

Who says we don't love the science here on The Secret Sun?

As longtime readers know, I call the Fermi Paradox the "Far Mi Paradox."

Because while it might be terrific science in some kind of computational way, it's really terrible logic.

Shit is really far away and even sending a signal across the galaxy not only takes a lot of time, it takes a ridiculous amount of energy as well. Plus there's a lot of crap in the way from there to here.

People are conditioned to believe really dumb things, like that the Earth is small, fragile and overcrowded. The Earth is actually unimaginably enormous, has withstood massive comet and asteroid strikes and is practically empty. Human beings cover a tiny fraction of the land mass-- which is only 29% of the Earth's surface-- and are mostly clustered around rivers and harbors.

Whatever model you choose to follow-- unless it's some hyper-solipsistic kind of Truman Show reality -- you will probably see the Cosmos as extremely large, even if you think all these other galaxies in Hubble photos are just CGI.

So when signals burst through-- if in fact they are actual signals -- chances are good they're actually coming from our general vicinity (anywhere from the troposphere to the Oort Cloud) or they're coming from a civilization we should all hope and pray we never actually meet. 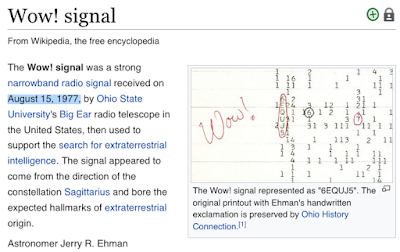 We just passed the 42nd anniversary of the so-called "Wow Signal," when a radio telescope picked up what seemed like an artificial signal emitting from the general direction of Sagittarius. It's been the topic of a lot of debate over the years but whatever. Gotta gin up those big grant dollars.

Now I know this might seem a bit myopic, but if anyone had the capability to show up from the general direction of Sagittarius, they'd probably regard us the way a new owner would regard a hornet's nest in the attic of the property he just bought on auction.

In other words, if someone came all that way, my bet is that we'd be long-shimmered by the time they even landed. Just natural facts is all. 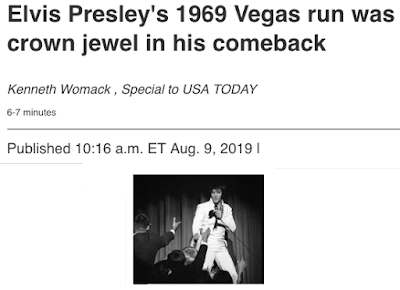 Synchroliciously, the Wow Signal was picked up the day the King of Rock n Roll stroked out on a Memphis toilet after downing too many barbiturates and Fool's Gold sandwiches.

And as many of you remember, Elvis spent the last decade of his life rockin' Heaven or Las Vegas, the other city with the tacky and sinister fake pyramid, before he ascended to Heaven to serenade the saints. Plus Jeff Buckley and all the rest of it and forfuck's sakejustbelievealready. 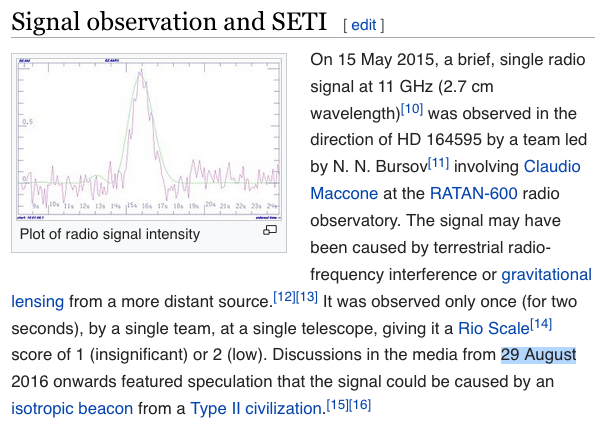 The Wow Signal gets all the glory-- as with everything bad in our world, you can blame Boomer nostalgia for that-- but it got a nice run for its money back in the dim, dusty days of 2015, when another burst shot forth from the constellation of Hercules. This went down on May 15, but for some odd reason the story wasn't picked up until August 29, 2016.

What could possibly be the significance of August 29th when it comes to alien transmissions being picked up from outer space? 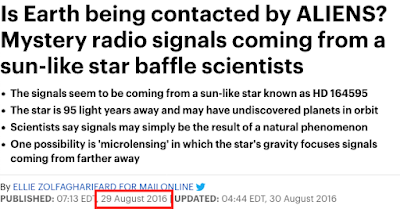 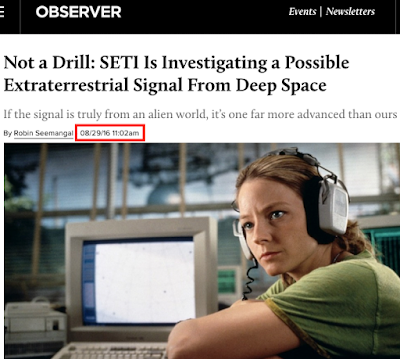 Either way, the story made a fairly big splash that day, often conjoined with stills from Contact, the 1997 SF movie starring none other than Jodie Foster.

Whom Secret Sun fans may also know as... 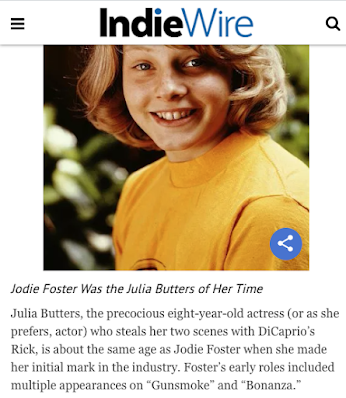 Are you even mildly surprised by this point in the game?

The star this alleged alien signal emitted from has a very interesting neighbor in our night sky.

I'm sure you've guessed it by now, haven't you? 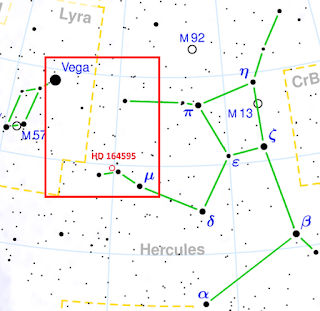 See? I knew you did.


BUT IT BEARS REPEATING... 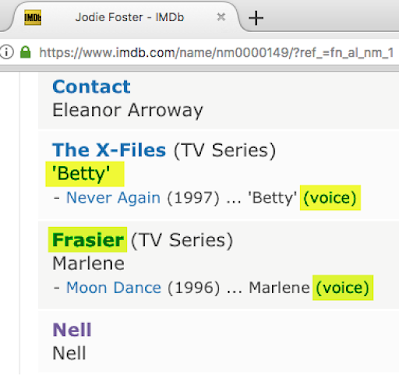 So according to Roger Ebert, Trudy Fraser also played a woman with "completely alien speech cues and body language."

Oh, wait: did I happen to mention that in the movie, Nell has a Twin? Who we see drown?

And you ask-- you seriously ask-- why I am the way I am now? Do you really think finding the key to all the eternal mysteries was going to be all lollipops and cotton candy?

Of course, in addition to playing an astronaut who travels to Heaven or El Vega, Trudy Fraser voiced "Betty" and appeared on Frasier.

Trudy Fraser's "Betty" role on The X-Files is a talking tattoo that drives its wearer (Space:Above & Beyond star Rodney Rowland) to murder. The episode sees Scully traveling to Phila-Delphi and Mulder taking a forced vacation to... 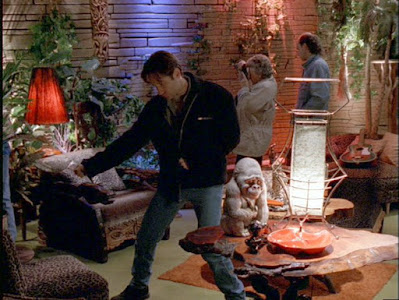 He can only genuflect, as you can plainly see. 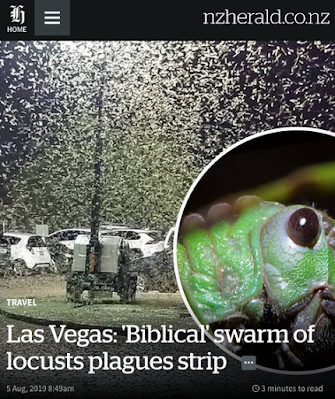 It's a good thing Mulder didn't go to Las Vegas. There's locusts in there.

They got the old fool gold. 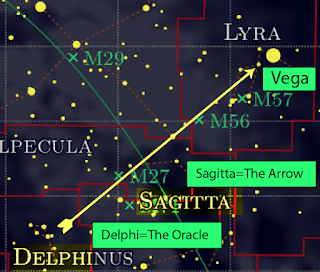 The name "Arroway" was probably intentionally concocted by Sagan for a reason, since Sagitta the Arrow points directly at Vega. Especially if you approach from Delphinus, which is the source for "Delphi." 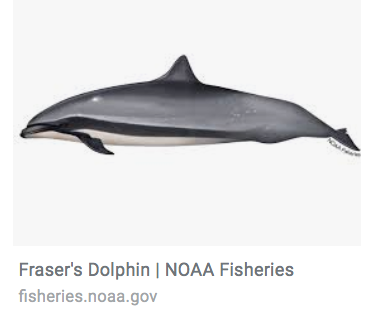 
THIS IS THE DAWNING OF THE AGE OF SAGITTARIUS 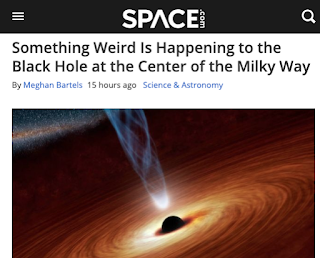 Back to the Big Bowman, it seems that there was a bright flash emitting from Sgr A, the Black Hole Sun at Galactic Center. Back in May, apparently.


And oddly enough, there was some kind of impact seen on the surface of Jupiter not long ago. They tell me that Sagittarius and Jupiter are linked somehow but the connection eludes my pathetic grasp of Astrology. Feel free to enlighten me.

Here's a timelapse of images over 2.5 hr from May from @keckobservatory of the supermassive black hole Sgr A*. The black hole is always variable, but this was the brightest we've seen in the infrared so far. It was probably even brighter before we started observing that night! pic.twitter.com/MwXioZ7twV
— Tuan Do (@quantumpenguin) August 11, 2019

But even so the flash at the Black Hole Sun was observed at the Keck Observatory, only because we're not drowning in enough symbolism already. 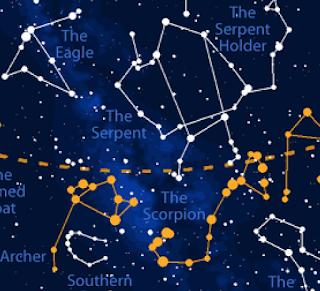 But it was of interest to me given our recent discussions on the world-famous Eye of Ra being the conjunction of the constellations we know now as Ophiuchus and Scorpius. A little factoid first noticed by all your friend here at Secret Sun Central. 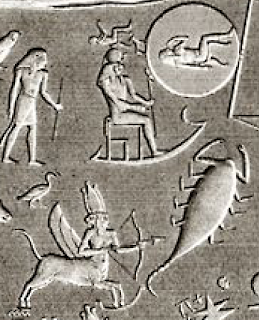 The Egyptians saw Ophiucus as the Bark of Ra, which sat over a recognizable Sagittarius and Scorpius. 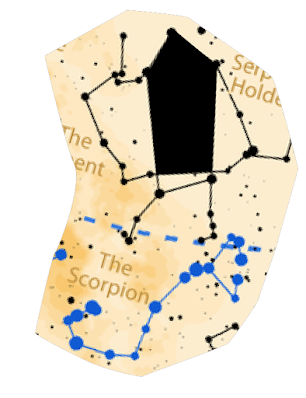 So as you can here, you can easily find a rough eye shape but filling in the space formed by the major stars of Ophiuchus-Ra's Bark and that that weird little curlicue is obviously and inarguably the tail of Scorpius. 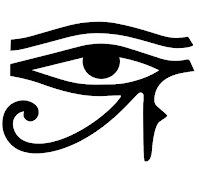 And that weird thorn-looking spiky thing is formed by the stars in Ophiuchus's leg and the head of Scorpius. It could indicate an arrow pointing to the southerly band of the Milky Way. 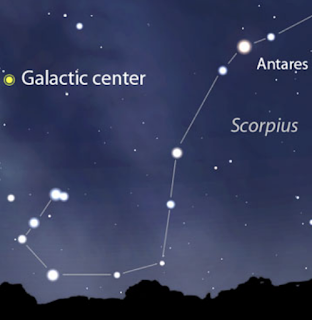 Now, I realize I'm not only pissa, I'm wicked pissa at this stuff. But seriously? No one?

Which of course means that Algol, which we now know was the legendary "Eye of Horus," is depicted as the left eye because it lies on the opposite end of the Ecliptic from the Eye of Ra at Galactic Center(ish). Meaning they're six months apart in relation to each other on the Zodiac.

I'll have to go back in and see what those fractions might align to. When I get around to it. 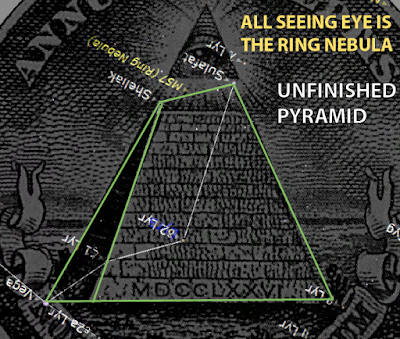 And completing the Eye hat-trick is the world-famous Eye of Providence, which we've seen represents the Ring Nebula (discovered in 1779) on the unfinished pyramid of the Great Seal, which is a cryptogram for Lyra, with Vega as the all-important cornerstone.

This diagram is a little rough, remind me to clean it up a bit. Right after I figure out those fractions. 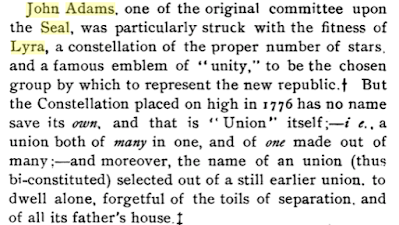 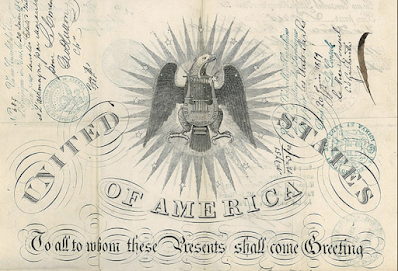 As Secret Sun Students well remember, Lyra was of immense significance to the Founding Fathers, for reasons I have yet to figure out. But certainly, President Adams Sr. and President Adams Jr. were clearly thinking of the Vegas, which were much brighter than the Sun to them.

So it's certain now that the the Great Seal-- long a source of wild speculation and supposition-- is actually two different depictions of Lyra and the Ring Nebula.
Fuck knows why.